Liver fibrosis associated with chronic liver disease, such as hepatitis B and hepatitis C, involves the excessive accumulation of extracellular matrix proteins (i.e., collagen), when hepatocytes are injured. Second harmonic generation (SHG) microscopy/two-photon excited fluorescence (TPEF) microscopy is widely used for the quantitative assessment of liver fibrosis (1-6). Researchers have observed a correlation between histological staging and the morphological features of collagen (6,7). The images obtained using SHG microscopy are largely free from variations introduced by the staining process. Computer-aided image analysis can be used to exclude inter-observer discrepancies among pathologists (8-10), and thereby achieve a more consistent evaluation of histopathological information.

The Metavir system, proposed by French METAVIR Cooperative Study Group, is one of most widely accepted scoring systems used to assess the extent of fibrosis by histopathological evaluation in a liver biopsy of patients with chronic liver disease. The system provides four stages of progression of fibrosis on a 5-point scale from 0 to 4: F0, no fibrosis; F1, portal fibrosis without septa; F2, portal fibrosis with few septa; F3, numerous septa without cirrhosis, and F4: cirrhosis. However, Metavir stage is limited by inter-observer variation in interpretation of liver biopsies because of heterogenicity of inflammation and fibrosis in different regions of the liver. Unfortunately, there are at present no well-established protocols for image acquisition or image analysis. Sampling discrepancy is a major limitation to the quantitative assessment of samples. Our ability to identify the collagen contributing to fibrosis can be influenced by the properties of the tissue sample as well as the area being scanned. Samples may include extraneous tissue, such as the capsule and longitudinal sections of vessels. Vessels in the tissue may be stretched during processing. Disturbing collagen (DC) should not be included in the quantitative assessment of fibrosis.

Despite improvements in efficiency due to advancements in scanning, there remains considerable room for improvement through the analysis of a smaller region of interest (ROI) rather than obtaining a full scan. If small ROI scans could be shown to provide the same correlative results as full scans with respect to Metavir stages, liver tissue obtained via a needle biopsy could undergo quantitative assessment using SHG/TPEF microscopy.

In this study, we sought to improve the accuracy of quantitative assessments by removing the signals from disturbing collagen in liver specimens. We also sought to optimize the sampling protocol with the aim of improving assessment efficiency.

This study was approved by the Ethics Committee of National Taiwan University Hospital and conducted in accordance with approved guidelines. We included in this study 111 patients with chronic hepatitis B who underwent hepatic surgery at National Taiwan University Hospital between Jan. 2000 and Dec. 2010. Liver samples were obtained from specimens harvested during operations. Written informed consent was obtained from all patients before obtaining the liver samples. Full tissue scanning using the Genesis system (HistoIndex Pte. Ltd., Singapore) was performed on all of the liver samples. They were laser-excited at 780 nm, SHG signals were recorded at 390 nm to visualize collagen, and TPEF signals were recorded at 550 nm to identify tissue structures. Images were acquired at 20× magnification with 512×512 pixel resolution, and each image had a dimension of 200 µm × 200 µm. Multiple adjacent images were captured to encompass large areas. Chart records of all patients were retrospectively reviewed to obtain clinical data including sex, age, and Metavir fibrosis stage.

We adopted the labeling results of pathologist as a guide in the removal of three types of SHG signal during the quantified assessment of liver fibrosis (Figure 1). Specifically, we removed the signals associated with the following structures:

❖ Large patches of collagen near the boundary of capsules;

❖ Collagen around tubular structures, such as longitudinal sections of vessels; 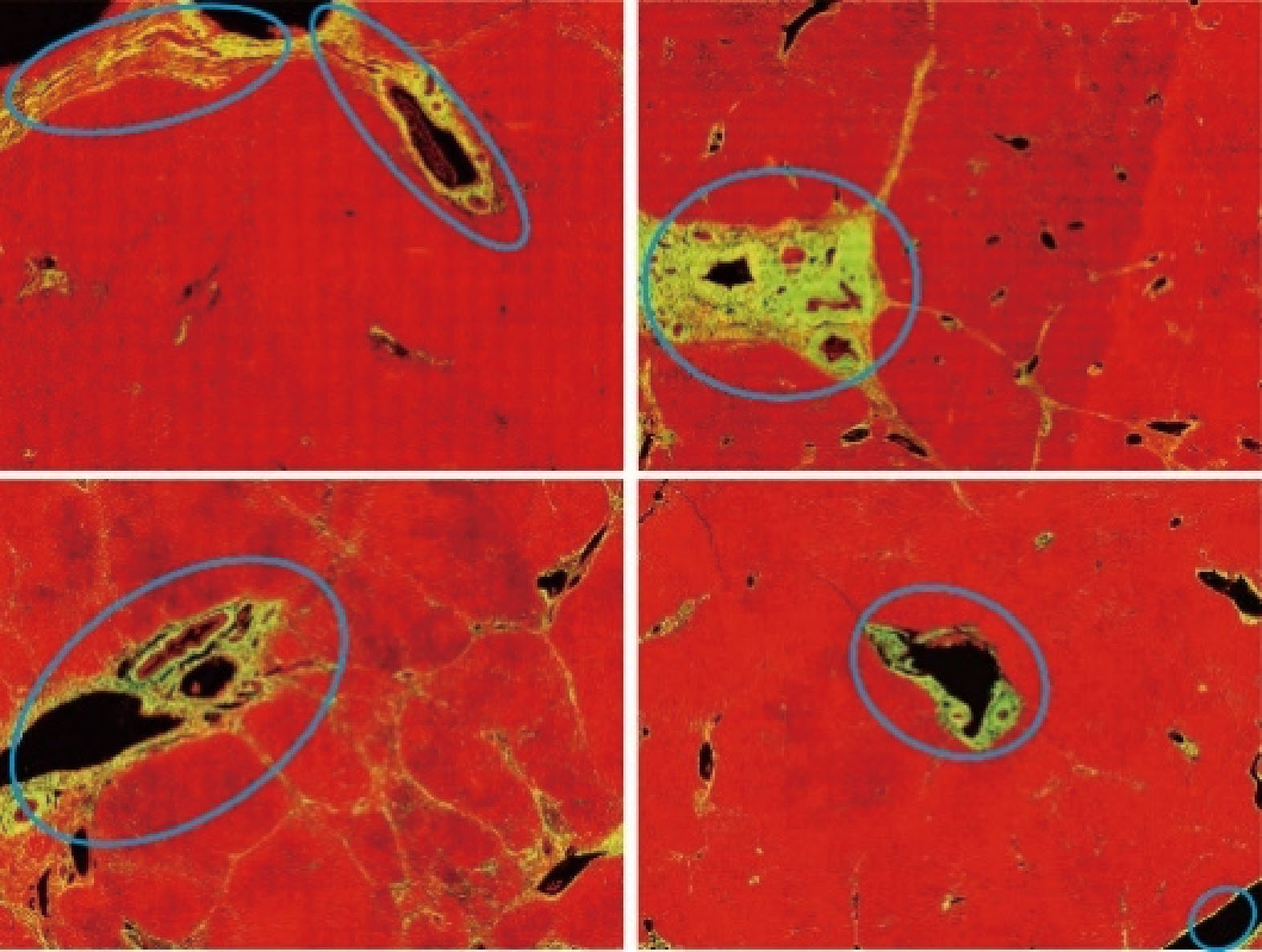 These forms of physiological collagen exist in normal liver tissue; however, they are regarded by pathologists as noise. In seeking to remove the signals from DC, we first selected 20 of the 111 full tissue SHG images for the extraction of image features from areas roughly labeled by pathologists. These feature sets were then used to identify the signals of DC in a training set to optimize the automation system (20 patients) and a validation set (91 patients). After training, the image analysis model was able to automatically detect signals from DC and exclude them from subsequent assessments of liver fibrosis. This auto-correction algorithm can be divided into three steps:

Normally, to image a tissue by SHG/TPEF microscope, many small tiles (1 tile = 200 µm × 200 µm) have to be imaged one by one. In our experiments, on average, 735 tiles were required to make a full scan. It is natural to think of using small ROI scans instead. To determine whether the small ROI scans were comparable with the full tissue scans in terms of accuracy, we compared units of 3×3 tiles and 5×5 tiles for the small ROI scans. We selected these sizes because specimens of this size could be obtained from the very thin liver samples obtained using needle biopsies. A 5×5 tile scan would be on the scale of a normal liver lobule (approximately 1 mm in diameter), whereas a 3×3 tile scan would cover the area containing two portal tracts and the central vein. Figure 2 presents example images of various sizes. We selected small ROIs at random (DC area was avoided) for 100 times. The correlation between image features and Metavir staging was evaluated using 3×3 tiles, 5×5 tiles, and full tissue scans.

To validate our algorithm with clinical data, the demographics and fibrosis staging of 111 patients were collected as shown in Table 1. It should be noted that pathologists differ in their descriptions of Metavir stages; therefore, we divided the patients’ data into four groups (i.e., Group 1, 2, 3, and 4) in accordance with the specifics of those descriptions. Then the individual groups have strong correlation with Metavir staging. 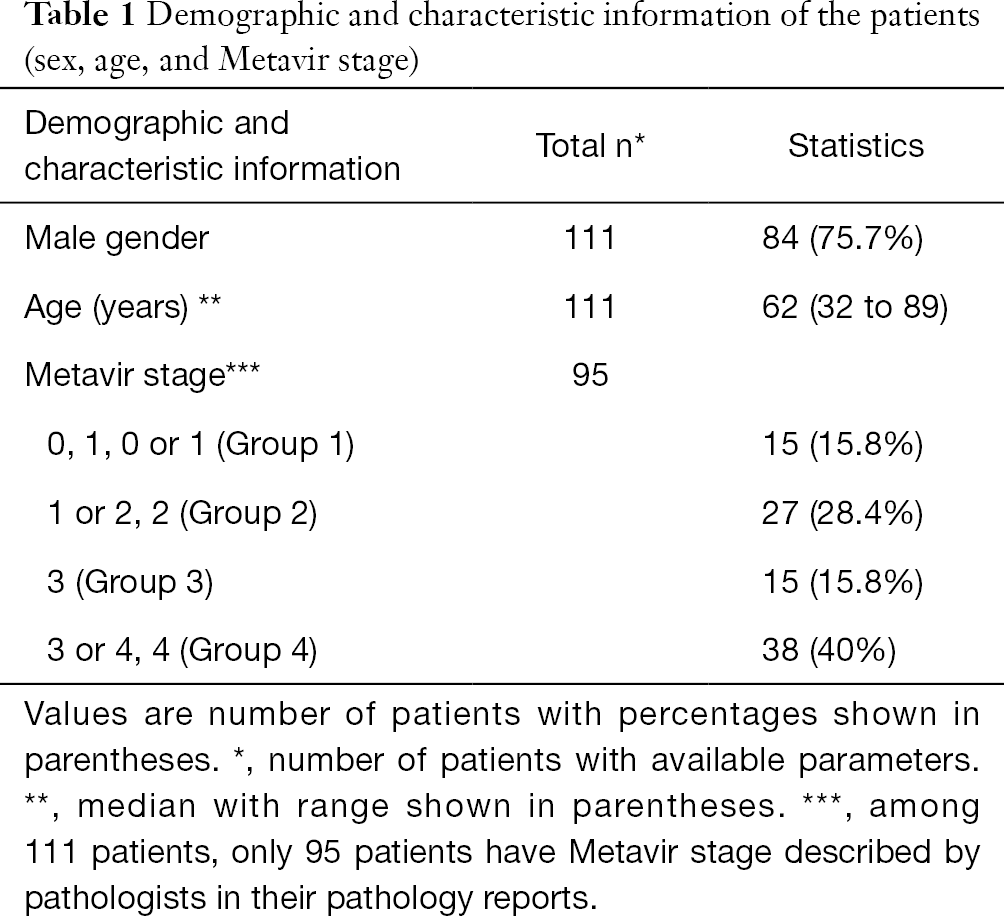 The DC signals were removed by the proposed auto-correction algorithm. An example of automatic labelling results in the training set (Figures 3, blue colors) were roughly the same as those recognized as disturbing collagen by a pathologist (Figure 1, blue circles). Images of the automatic labelling results from the validation sets further showed that automatic identification of DC performed well and were compatible with the areas of disturbing collagen recognized by the pathologists (Figure 4). As the algorithm was well-tuned to detect all the DC in the training set, DC detection accuracy was evaluated on the images from the validation set. The algorithm detected 88 of 97 (90.7%) DCs which were labeled by the pathologists. 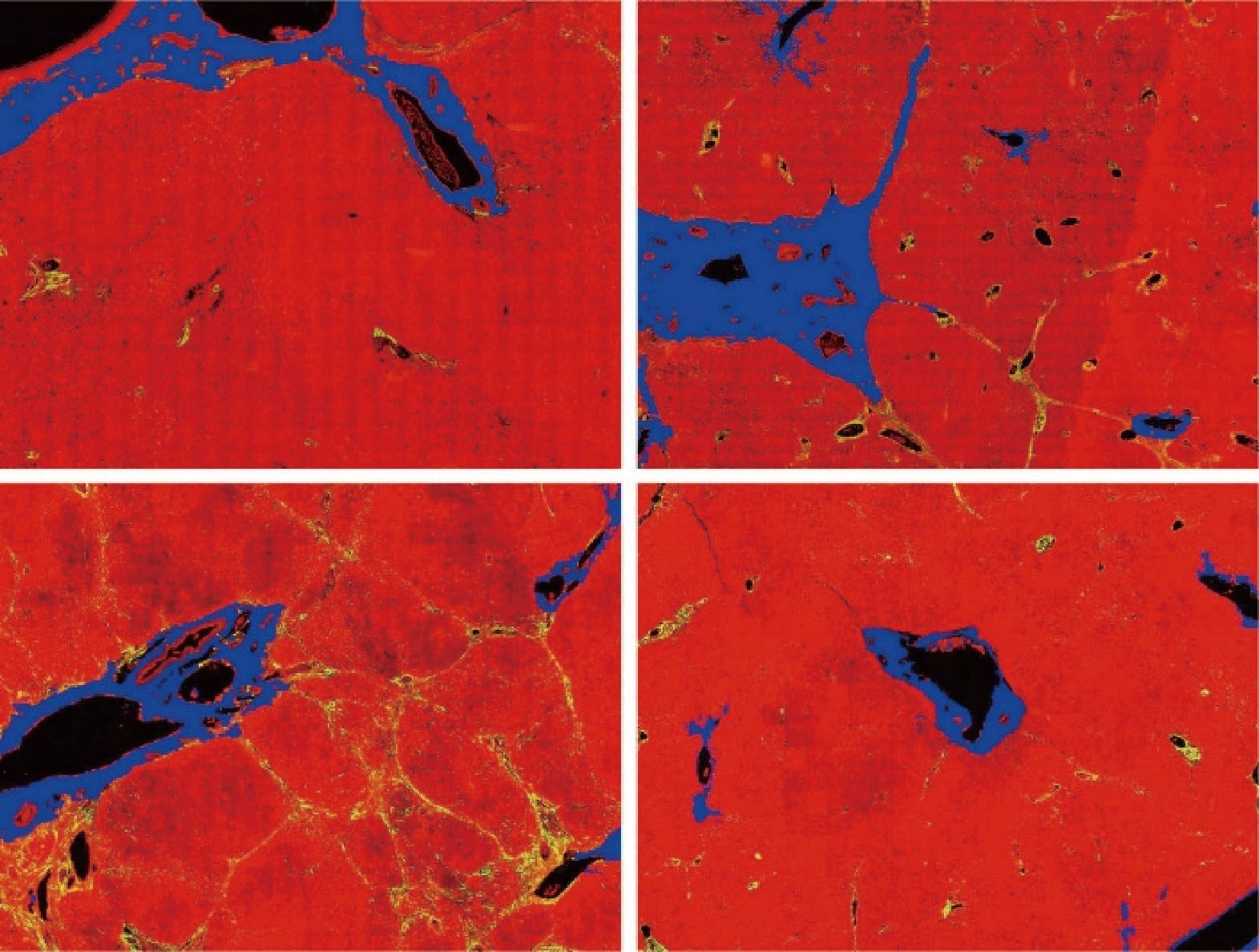 The comparison of the quantitative assessments (mean and standard deviation of SHG percentage) obtained before and after removal of DC signals in the four groups was shown in Figure 5. The standard deviation reduced in all the four groups (indicating that more homogeneous within each group), while the mean difference between groups 3 and group 4 increased (indicating enhancing ability to distinguish between different groups). 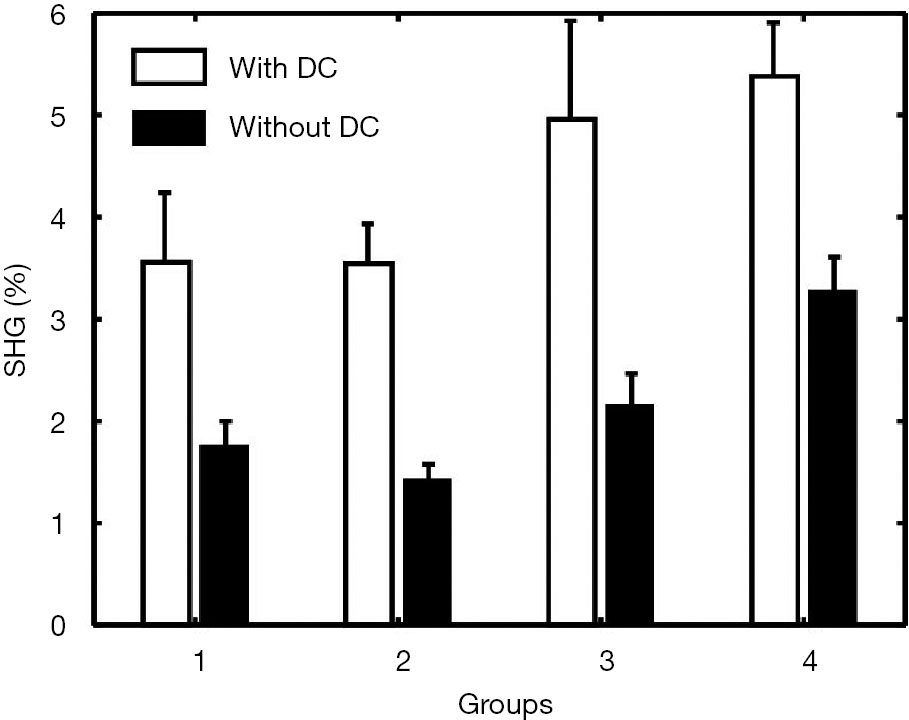 Figure 5 Comparison of quantitative assessments (using total collagen percentage, SHG%, as an example) with/without disturbing collagen, showing a reduction in standard deviation and increase in between-group differences (e.g., Group 3 and Group 4), indicating that more homogeneous within each group and enhancing ability to distinguish between some different groups were achieved after removing disturbing collagen. The individual groups represent a strong correlation with Metavir staging, since the individual groups were grouping based on histopathological reports of Metavir staging form two pathologists as described in Table 1. 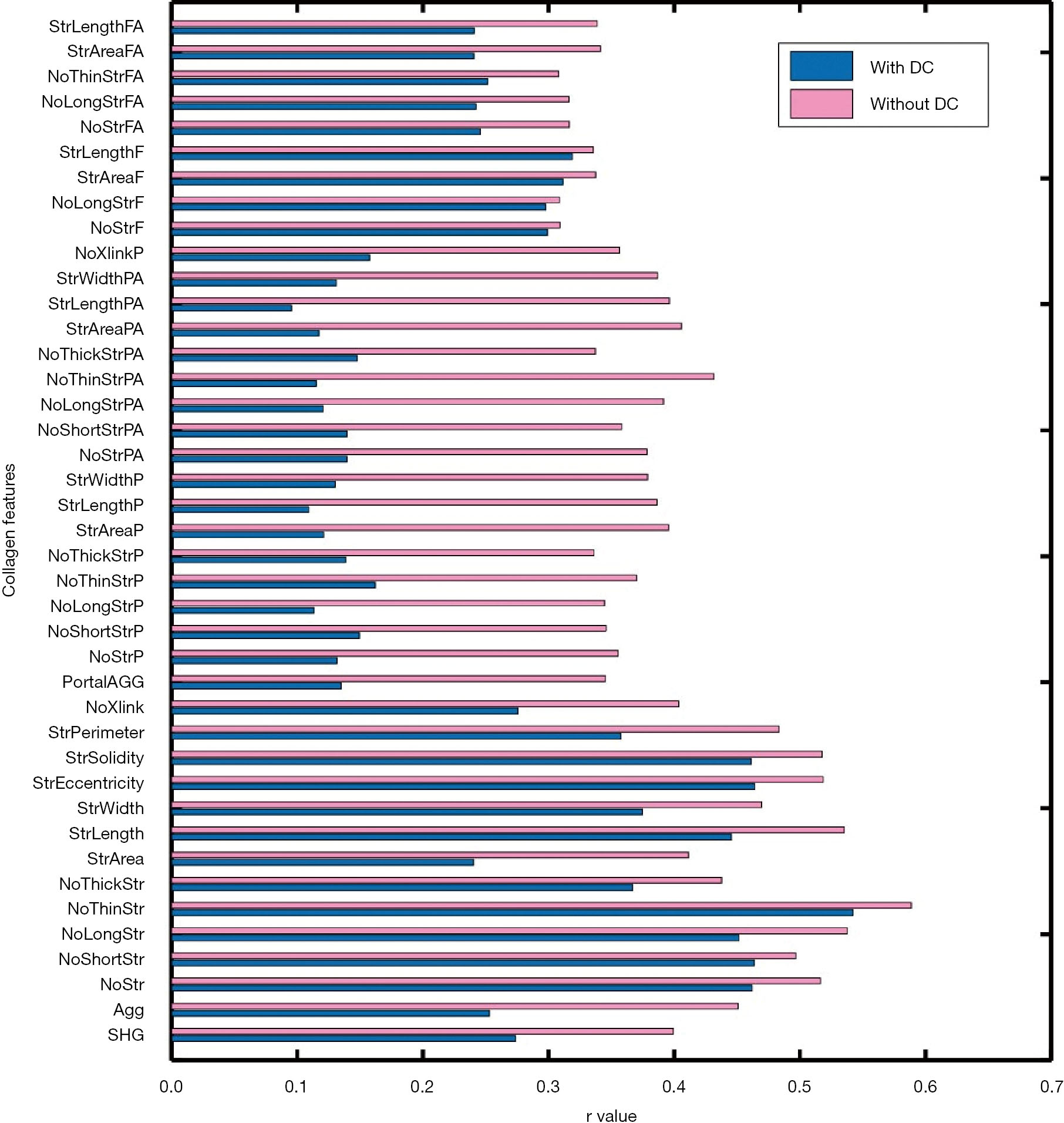 Figure 6 Correlation (Rs: 0 means no correlation while −1/1 indicates a perfect negative/positive correlation) between image features and Metavir stages, showing improvement in correlation following the removal of DC. These collagen features were developed in our previous studies and had already been validated by pathologists as well as hepatologists (7,13). The abbreviation and full description of these collagen features are listed in the Table 2. 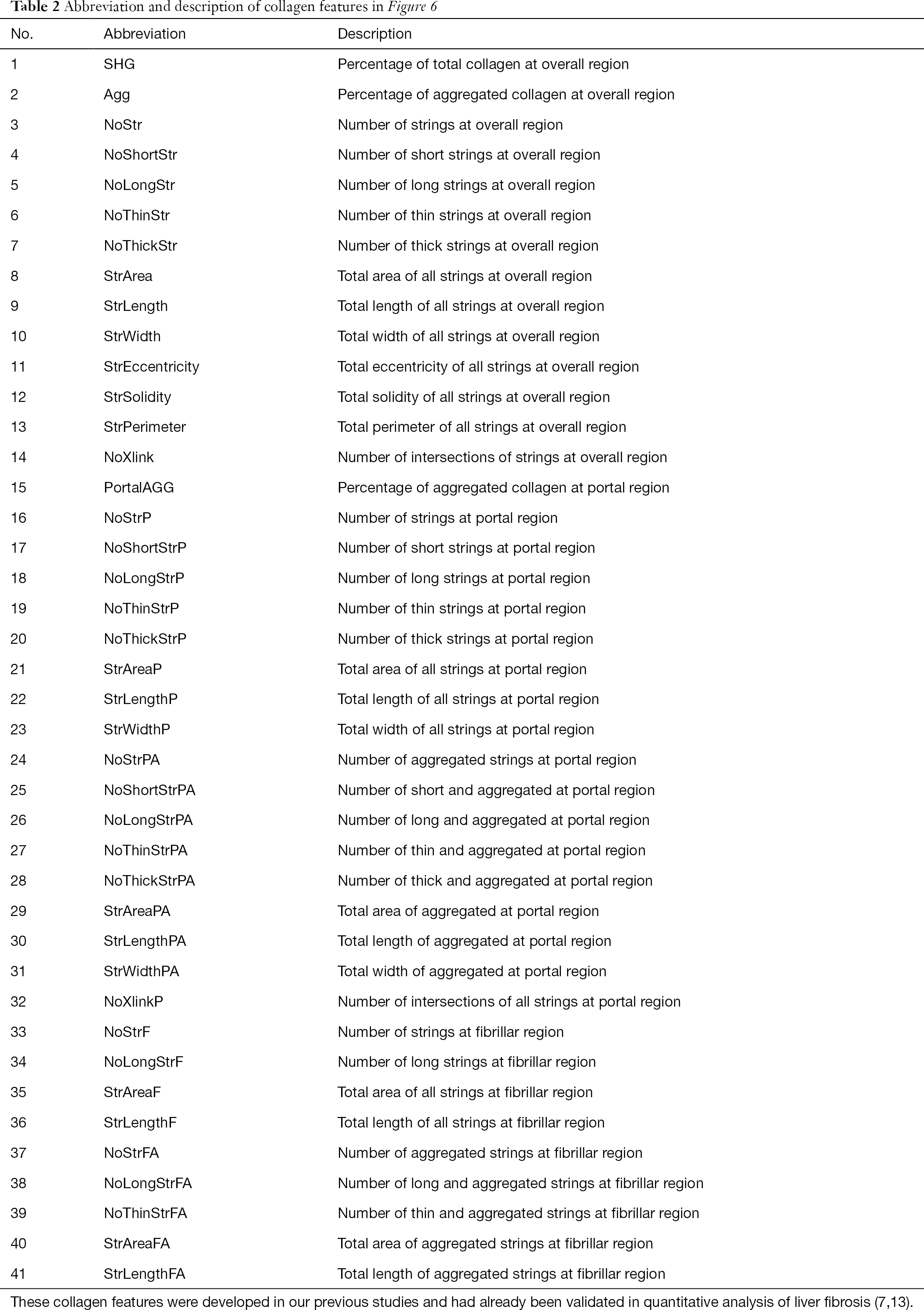 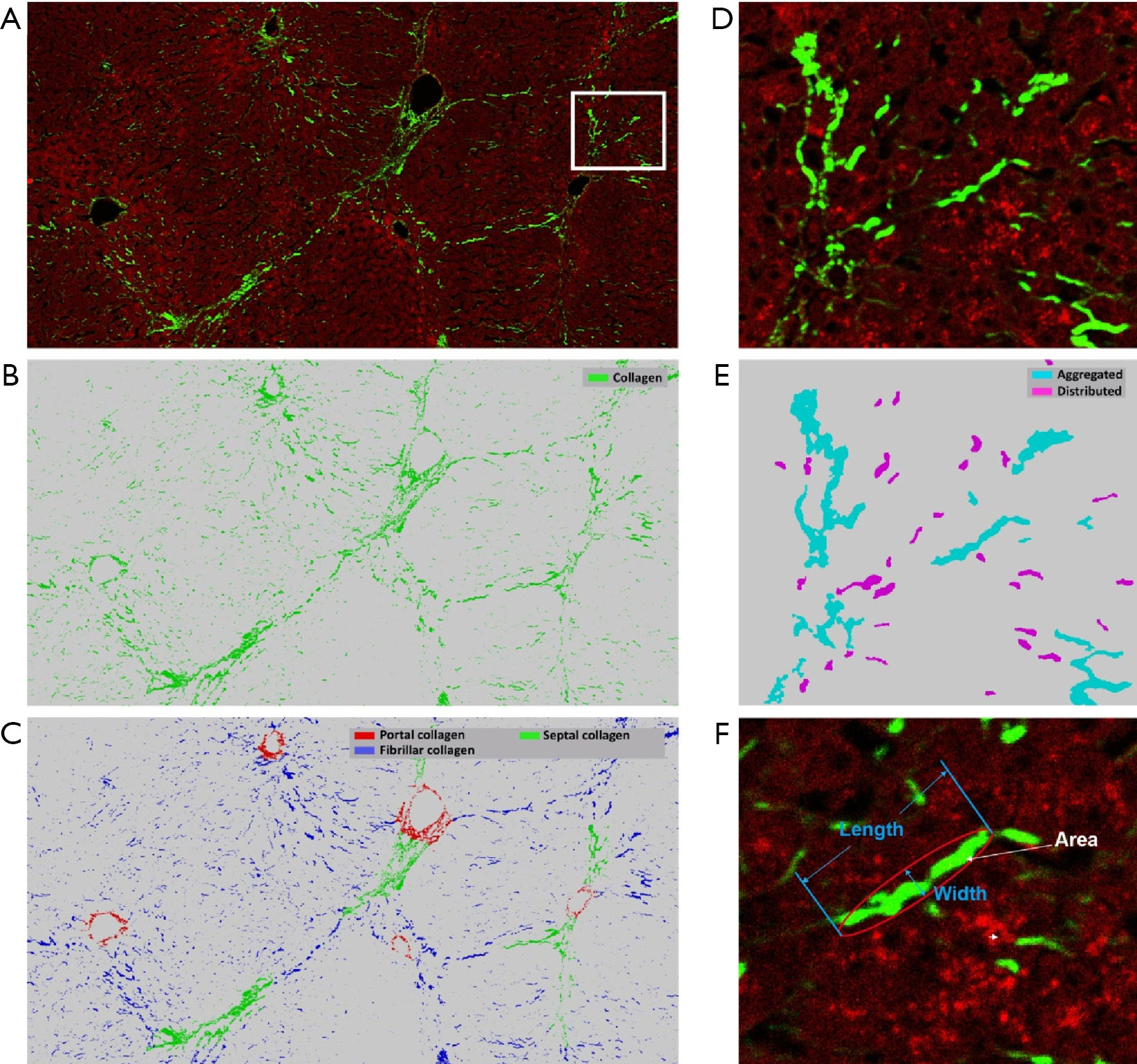 We compared the total percentage of collagen in full scans against the normalized average in small ROIs from the same sample. It was found that increasing the number of scans greatly reduced the mean error rates. Five scans of 5×5 tiles or ten scans of 3×3 tiles were sufficient to minimize the mean errors (Figure 8A). We obtained similar results in the correlation test, where the correlation coefficients between the total percentage of collagen and Metavir stage in the small ROI scans exceeded the same evaluation in the full scan which required 735 tiles on average in our experiments (Figure 8B).

Figure 8 Optimal sampling of small ROI scans achieves comparable assessment with full tissue scans. (A) Five scans of 5×5 tiles or ten scans of 3×3 tiles were sufficient to minimize the mean errors. (B) The correlation coefficients between the total percentage of collagen and Metavir stage in the small ROI scans exceeded the same evaluation in the full scan which required 735 tiles on average. ROI, region of interest; SHG, second harmonic generation.

Our experiment results demonstrate that the automated removal of DC signals can greatly improve the accuracy of SHG assessment for liver fibrosis and that optimizing the sampling process using small ROIs can improve efficiency. We identified three types of DC that are likely to interfere with the quantification of samples performed by doctors (or computer algorithms):

These forms of physiological collagen exist in normal liver tissue and must be disregarded during the examination of images for signs of fibrosis. Pathologists learn through experience to disregard DC in order to correctly identify correlations between image features and Metavir stages. Our findings demonstrate that the same results can be achieved by an algorithm in an automated image analysis program. The proposed algorithm could be used to pre-process full scans in order to improve quantification result. It could also be applied to low-resolution full scans in order guide the scanning machine or its operator to avoid areas containing DC.

Full tissue scans are currently the standard for this type of assessment; however, this requires large specimen obtained via surgical biopsy and the scanning process is time consuming (up to several hours depending on resolution). The very thin liver samples obtained via needle biopsies (approximately 1 mm in thickness) are inapplicable to full tissue scanning analysis; however, we found that multiple small ROI scans (five scans of 5×5 tiles or ten scans of 3×3 tiles) could achieve correlation results on par with those of full tissue scans. Furthermore, the small area of these samples would greatly reduce the time required for scanning.

In conclusion, the automated removal of DC signals using small ROI scans as an alternative to full tissue scans can greatly improve the accuracy and efficiency of image acquisition and image analysis for the quantitative assessment of liver fibrosis based on SHG/TPEF microscopy.

Conflicts of Interest: All authors have completed the ICMJE uniform disclosure form (available at http://dx.doi.org/10.21037/qims-20-394). The authors have no conflicts of interest to declare.

Ethical Statement: The study was conducted in accordance with the Declaration of Helsinki (as revised in 2013). The study was approved by institutional committee and written informed consent was obtained from all participants.