Ankylosing spondylitis (AS) is a chronic systemic disease that primarily causes inflammation and structural damage to the sacroiliac joints and spine (1). In the early stages of AS, patients suffer from sacroiliitis, spondylitis, spondylodiscitis, and spondyloarthritis (2,3). In the late stages, AS patients often develop a progressive ossification of spinal ligaments and facet joints, leading to fixed thoracolumbar kyphosis (4,5).

AS patients with fixed thoracolumbar kyphosis who underwent lumbar osteotomy in our center from January 2004 to December 2010 were retrospectively reviewed. The ethics committee approved this study of the Affiliated Drum Tower Hospital of Nanjing University Medical School. The inclusion criteria were as follows: (I) the diagnosis met the modified New York criteria for AS (12); (II) patients had preoperative standing radiographs of the entire spine and magnetic resonance imaging (MRI) of the sagittal lumbar spine; (III) disease duration >3 years; and (IV) laboratory tests including erythrocyte sedimentation rate (ESR), C-reactive protein (CRP), and human leukocyte antigen-B27 (HLA-B27) were available. Patients with spinal fractures, pseudarthrosis, and those who had undergone previous spinal surgery were excluded. In total, 45 AS patients were included in this study. There were 40 males and five females with an average age of 35.8±9.5 years (range, 17–57 years) and mean disease duration of 9.0±5.3 years (range, 3–15 years).

Disease activity was assessed using the Bath Ankylosing Spondylitis Disease Activity Index (BASDAI, range 0–100), which is a traditional scoring system widely utilized for the evaluation of disease activity in AS patients, and was already in use at our clinic. It was a self-administered questionnaire related to the particular symptoms of the disease, including fatigue/tiredness, axial pain, joint swelling, discomfort in enthuses, stiffness severity, and duration (13). Also, the Bath Ankylosing Spondylitis Functional Index (BASFI, range 0–100) was used. This is a self-reported measurement to assess patients’ perceived level of function during daily activities and physical function (14). Additionally, pain-related disability was assessed using the Oswestry Disability Index (ODI, range 0–100), a disease-specific measurement consisting of 10 items (15). 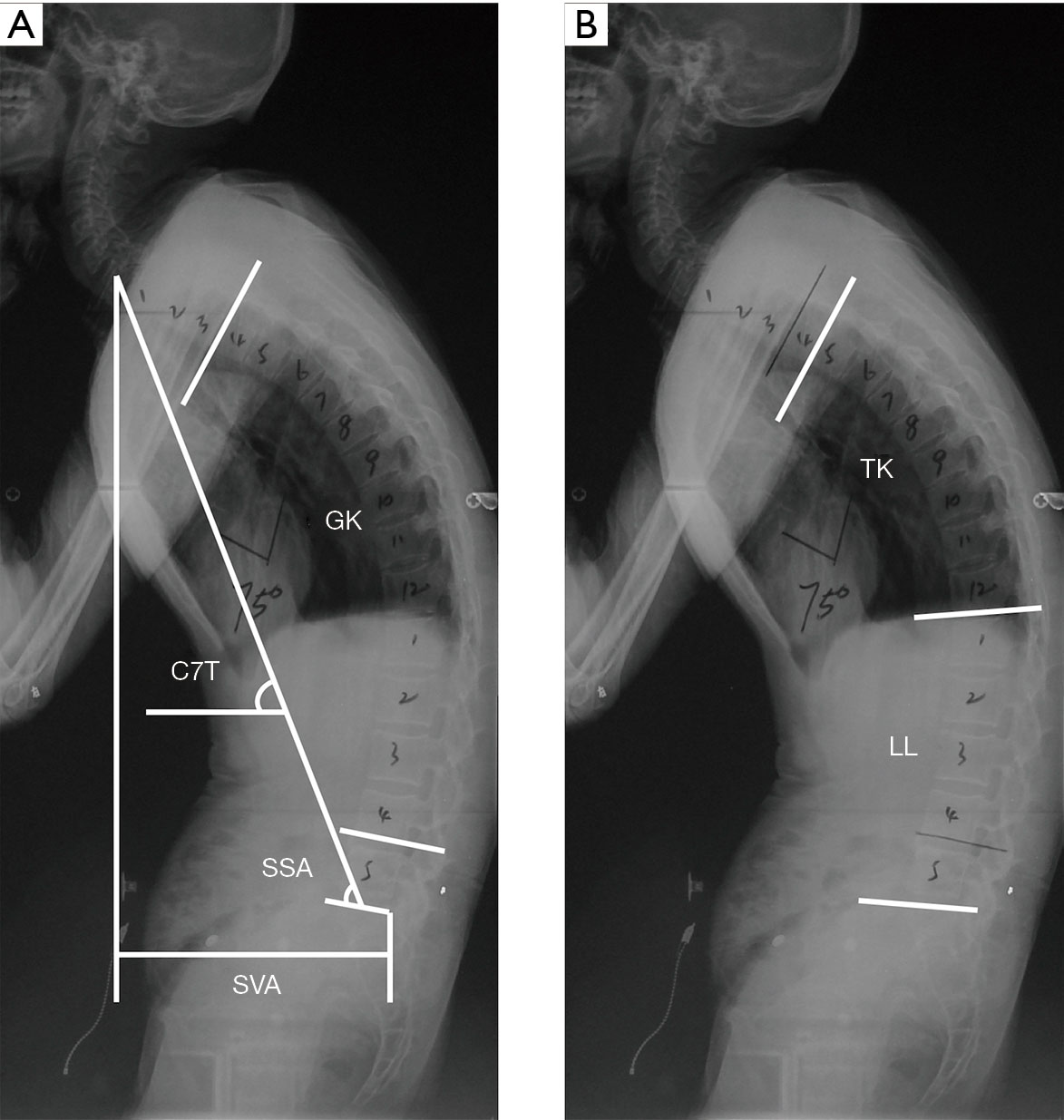 The modified Stoke AS Spine Score (mSASSS) system (22) was used to assess the structural damage on the lateral X-ray radiographs. A total of 12 anterior corners were assessed, including the lower border of the T12 vertebra, the upper and lower borders of all five lumbar vertebrae, and the upper border of S1. Each corner was scored as follows: 0= normal; 1= erosion, sclerosis, and squaring; 2= syndesmophyte; and 3= bony bridging (22). The sum of the numerical scores was recorded as the total mSASSS, and the scores ranged from 0 to 36.

The inflammation of the lumbar spine was scored according to the AS spinal MRI activity (ASspiMRI-a) scoring system (23). The MRI scan was performed using a 1.5-Tesla MRI Achieva scanner (Philips Medical Systems, Best, The Netherlands), and images were assessed using the PACS client software (Easy Vision IDS5, version 11.4, Philips, Hamburg, Germany). The sagittal orientation sequences were the fat-saturated short tau inversion recovery (STIR) and the T1-weighted Turbo Spin-Echo (TSE) (24,25). Inflammatory activity was assessed at the level of the disco-vertebral unit (DVU), which was defined as the area between the two horizontal lines crossing the middle of two adjacent vertebrae on sagittal MRI (Figure 2) (23). Each DVU was scored as follows: 0= normal; 1= minor (≤1/4) bone marrow edema (BME) of each DVU or relevant changes; 2= moderate (>1/4 but ≤1/2) BME or enhancement; 3= major (>1/2) BME or enhancement of the DVU; 4= minor (≤1/4) erosion with BME; 5= moderate (>1/4 but ≤1/2) erosion with BME; and 6= major (>1/2) erosion of the DVU (23). Six DVUs from the T12 to S1 were assessed for each AS patient, and the total ASspiMRI-a scores ranged from 0 to 36. Two qualified and well-trained readers (ZC and LB), different from the readers of the radiographs, who were blinded to the patient’s identity and treatment, evaluated each image independently. The mean values of the scores assessed by the two readers were adopted in the analysis. 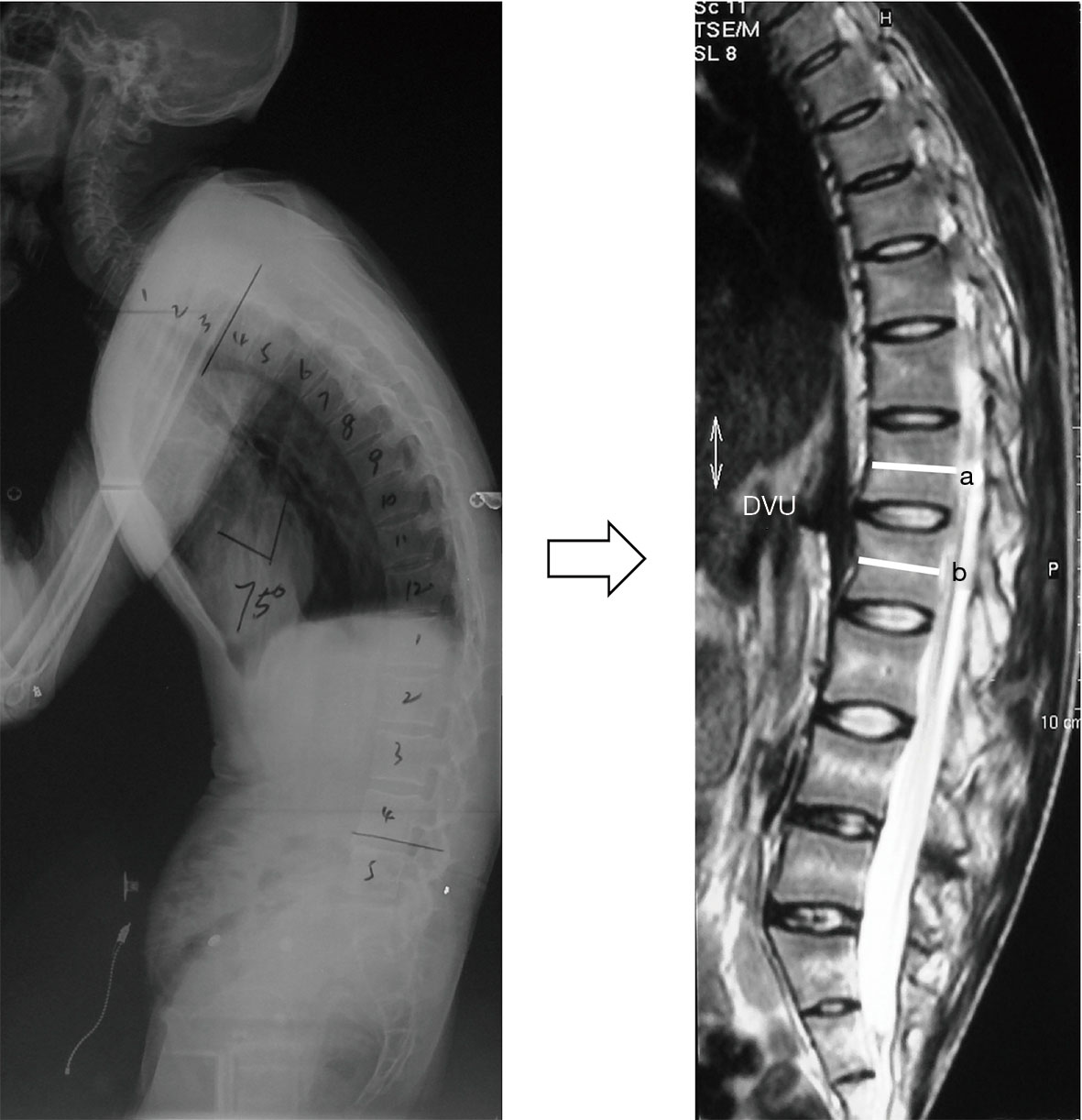 Figure 2 A DVU referred to the area between line a and line b. Lines a and b were defined as the horizontal lines bisecting two adjacent vertebrae. DVU, disco-vertebral unit.

Data were statistically analyzed using the SPSS software 17.0 (SPSS, Inc., USA). Descriptive statistics were used to analyze patients’ demographic parameters. Correlation analysis was performed using the paired sample t-test, and the Spearman correlation coefficients were calculated. Additionally, multivariable linear regression models were constructed to analyze the contributions of the mSASSS and ASspiMRI-a to the sagittal parameters. A statistically significant difference was defined as P<0.05. 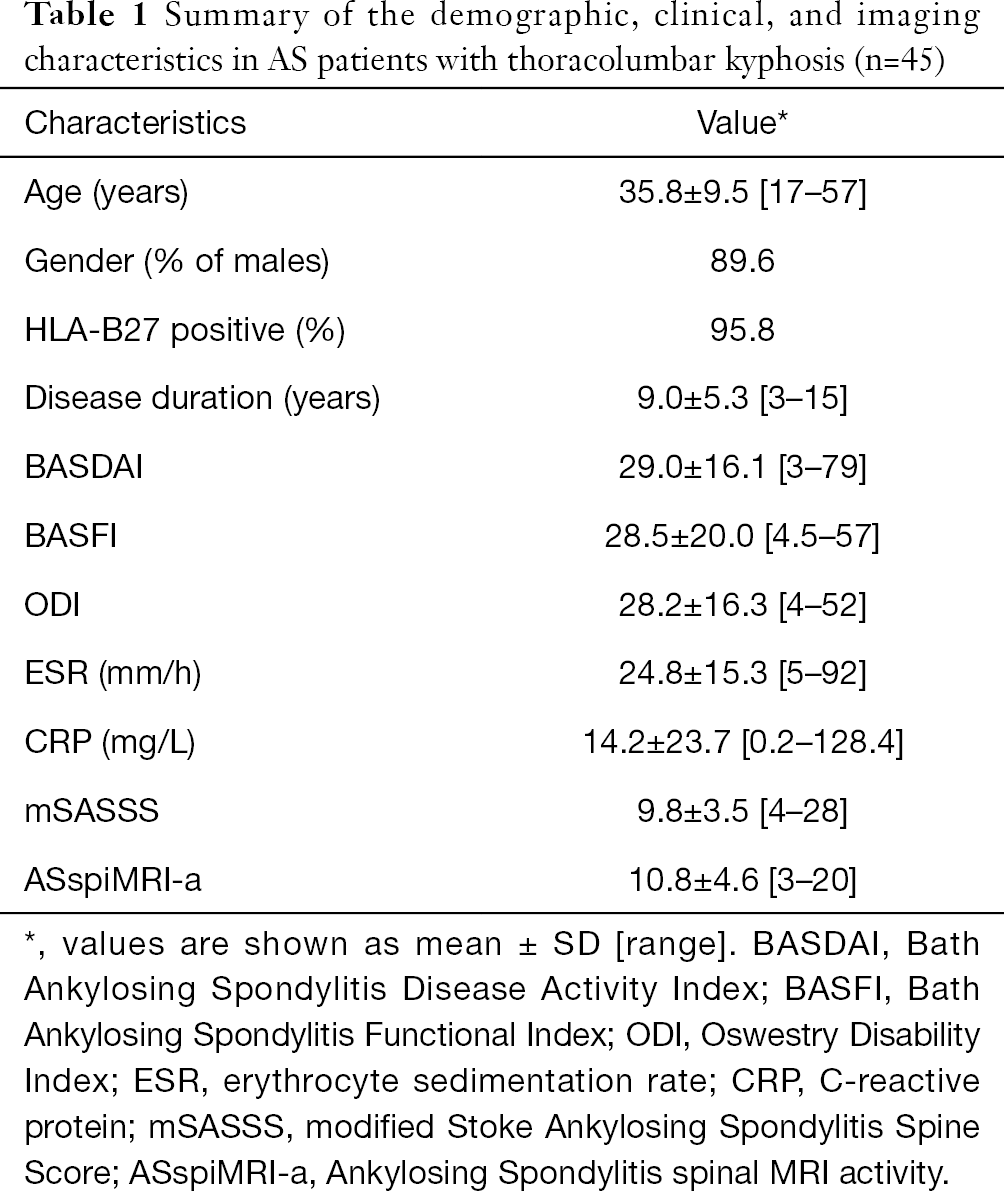 Table 1 Summary of the demographic, clinical, and imaging characteristics in AS patients with thoracolumbar kyphosis (n=45)
Full table

Interactions between the sagittal parameters and the other possible factors, including age, gender, disease duration, BASDAI, BASFI, ODI, ESR, CRP, and HLA-B27, were tested and excluded. When taking the mSASSS and ASspiMRI-a as independent variables and the sagittal parameters (including C7T, SSA, SVA, and LL) as dependent variables, both the mSASSS and ASspiMRI-a determined the four sagittal spinal parameters (P<0.05, Table 5). Notably, the sagittal imbalance was determined to a greater extent by mSASSS than ASspiMRI-a (the β values were −1.550 vs. −0.649 for C7T, −1.865 vs. −1.231 for SSA, 9.161 vs. 3.823 for SVA, and 3.128 vs. 1.717 for LL). 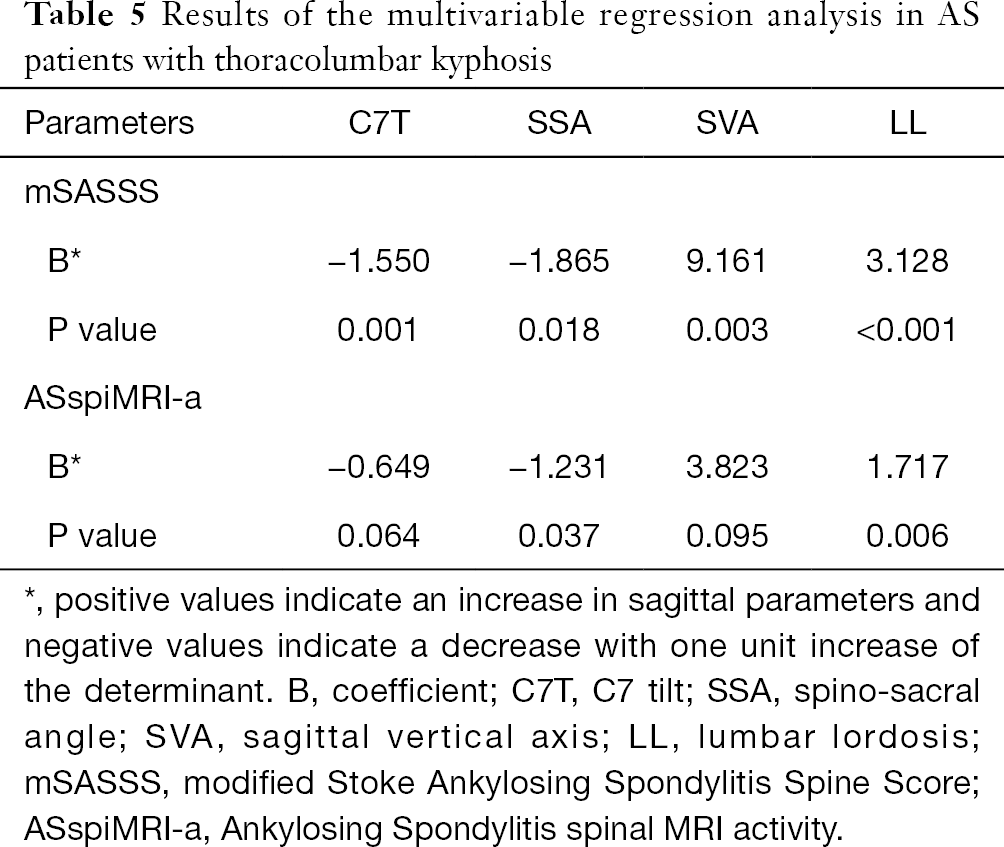 In the advanced stages of AS, patients often suffer from fixed thoracolumbar kyphosis (17,26). The gradually increased thoracic kyphosis and decreased lumbar lordosis eventually lead to the rigid global sagittal imbalance (17,27,28). Crucially, this sagittal imbalance is not merely a cosmetic and psychological disturbance (26). The severely inefficient posture ultimately leads to the inability to look straight ahead and a dramatic restriction of walking and limitation in interpersonal communications (17,29).

Recently, several investigations have found that spinal inflammation and structural damage were two vital bio-mechanisms of AS impairments (11,18). According to the baseline and 2-year data of the Outcome in Ankylosing Spondylitis International Study (OASIS) (217 AS patients), Landewé et al. concluded that the functional impairment in AS patients were independently influenced by both the patient-reported disease activity and the level of structural damage of the lumbar and cervical spine (10). Additionally, Machado et al. investigated 214 AS patients from the Ankylosing Spondylitis Study for the Evaluation of Recombinant Infliximab Therapy cohort. They suggested that the spinal mobility impairment in AS patients was independently caused by the irreversible spinal damage and the reversible spinal inflammation (11). In early AS, spinal mobility impairment was more attributable to spinal inflammation, whereas structural damage was the primary cause of impairment in late disease. Similarly, we hypothesized that the fixed sagittal imbalance in late AS patients was closely related to the inflammation and structural damage of the lumbar spine. The chronic inflammation caused the progressive ossification of spinal ligaments and facet joints will ultimately lead to the severe kyphotic deformities (5,29). In addition, structural spinal damage contributed to the disturbance of sagittal alignments and led to thoracolumbar kyphosis and global sagittal imbalance (8,11).

However, the contributions of lumbar inflammation and structural damage to the sagittal parameters in AS patients with thoracolumbar kyphosis were still unclear. To our knowledge, this was the first study focusing on the correlations between structural damage and inflammation of the lumbar spine and the sagittal imbalance in AS patients with thoracolumbar kyphosis.

Moreover, the present study demonstrated that sagittal imbalance was more likely caused by the irreversible lumbar structural damage than the reversible lumbar inflammation in AS patients with thoracolumbar kyphosis (the β values of mSASSS were greater than ASspiMRI-a according to the multivariable regression models, as shown in Table 5). This conclusion was closely related to the findings of Machado et al. (11), who reported that spinal mobility impairment was determined to a much greater extent by structural damage (β=0.865, P<0.001) than spinal inflammation (β=−0.305, P=0.165) in AS patients with a disease duration >3 years.

Significantly, the long-term effects of inflammation should not be neglected since AS patients with thoracolumbar kyphosis often suffered from inflammation (all AS patients had elevated ASspiMRI-a scores in the current study). Notably, although all P values were <0.05, multivariable regression analysis found no correlation between ASspiMRI-a and C7T or SVA (Table 5). Evaluation of sagittal balance was comprehensively based on the sagittal parameters, including C7T, SSA, SVA, and LL, as reflected by our results in Table 5. Although the multivariable regression analysis did not demonstrate a significant correlation between ASspiMRI-a and C7T or SVA (P>0.05), the results did demonstrate marginal correlations between lumbar inflammation and C7T (P=0.064) and SVA (P=0.095). Furthermore, LL was significantly correlated with C7T, SSA, and SVA (Table 4), which implied that LL might play a crucial role in determining the other three parameters. This is because LL was the basement of the upper spine and the most secondary affected area of spinal lesions in AS. In other words, LL could also partially reflect the sagittal balance status. The results in Table 4 illustrated that the ASspiMRI-a score was significantly associated with SSA and LL and was marginally correlated with C7T and SVA. Based on this and clinical practice, the proposition of lumbar inflammation being linked to the sagittal imbalance was acceptable in the present study.

Some limitations of this study should be noted. Firstly, the mSASSS scoring system was based on syndesmophyte formation and bridging in the anterior vertebral corners, while the posterior sites and soft tissue around the spine were underestimated. The ASspiMRI-a scoring system also exhibited a similar issue; vertebral inflammation was taken into account. However, the surrounding soft tissues and facet joints were excluded. Since the mSASSS and ASspiMRI-a scoring systems were already being used in our clinic, they were applied for the current study, and no other scoring systems were utilized. However, this is unlikely to have influenced the conclusions at the group level.

In summary, the sagittal imbalance, represented by abnormal LL, C7T, SSA, and SVA, was influenced by both structural damage and inflammation of the lumbar spine in AS patients with thoracolumbar kyphosis. The sagittal imbalance was more attributable to structural damage than inflammation of the lumbar spine in late AS patients.

We thank Yanyu Ma and Yuwen Wang for their assistance in the data analyses.

Funding: This work was financially supported by General Subjects on the Development of Medical Science and Technology in Nanjing (YKK16119).

Conflicts of Interest: All authors have completed the ICMJE uniform disclosure form (available at http://dx.doi.org/10.21037/qims-19-990). The authors have no conflicts of interest to declare.

Ethical Statement: The Ethics Committee approved this study of The Affiliated Drum Tower Hospital of Nanjing University Medical School. Informed consent was not applicable due to the retrospective nature of this study.