Uterine cervical cancer is one of the most common and lethal malignancies among women worldwide (1). The preferred treatment for clinical early-stage patients is radical surgery with individualized adjuvant treatment. About 15–20% of clinical early-stage patients had lymph node metastasis (2), one of the major prognostic factors and influential for postoperative treatment strategy (3-5). In 2018, the International Federation of Gynecology and Obstetrics (FIGO) staging for cervical cancer was revised, and retroperitoneal lymph node metastases came to be regarded as stage IIIC (6). Thus, an accurate and effective preoperative diagnostic approach for pelvic lymph node (PLN) metastases is urgently required.

Several imaging modalities have been used for preoperative assessment of PLN involvement in cervical cancer and 2-deoxy-2-fluorodeoxyglucose (18F-FDG) positron emission tomography/computed tomography (PET/CT) scan is more sensitive than CT and magnetic resonance imaging (MRI) (7-13). However, the PET/CT scan’s diagnostic performance is inconsistent and unsatisfactory, with a sensitivity of 48.6–82% (7-12). Although several studies have added radiomics for PLN metastasis prediction in cervical cancer, the complexity and technological immaturity limited its clinical application (14-16). Thus, we aimed to explore a simple and effective PET/CT scan-based predictive model for PLN metastasis of clinically early-stage cervical cancer.

Since most cervical cancers are squamous cell carcinomas, we analyzed this homologous group of patients. Our study demonstrated a PET/CT scan-based nomogram for preoperative identification of PLN metastasis in early-stage squamous cervical cancer.

A total of 241 patients between Jan 2010 and July 2015 and 110 patients between Aug 2015 and Dec 2017 were separately assigned into training and external validation cohorts. Patient characteristics including age, FIGO stage, preoperative squamous cell carcinoma antigen (SCCA) level, therapy, tumor diameter, and pathological PLN metastasis were obtained from the medical records.

The 18F-FDG was produced automatically by cyclotron (Siemens CTI RDS Eclipse ST, Knoxville, TN, USA) using the Explora FDG4 module in our center, and the radiochemical purity was >95%. All patients fasted ≥6 h before the injection of 18F-FDG. Venous blood glucose levels were maintained <10 mmol/L in our center. Patients were injected with 7.4 MBq/kg (0.2 mCi/kg) 18F-FDG and required to be quiet for approximately 1 h before scanning. Images were obtained on a Siemens biograph 16HR PET/CT scanner (Knoxville, TN, USA). The transaxial intrinsic spatial resolution was 4.1 mm (full width at half-maximum) in the view center. CT scanning (120 kV, 80–250 mA, pitch 3.6, rotation time 0.5) from the proximal thighs to the head was first performed for data acquisition, followed closely by a PET emission scan. The acquisition time was 2–3 min/bed. The PET image data sets were iteratively reconstructed using the attenuation correction of CT data, and the infused images were displayed on a workstation.

All PET/CT parameters, such as PLN in PET/CT, PLN diameter, and maximum standardized uptake value (nSUVmax), were analyzed and interpreted by two experienced nuclear medicine physicians independently and blindly without knowledge of pathological PLN involvement. A consensus was reached in cases of a discrepancy. A multimodality computer platform (Syngo; Siemens, Knoxville, TN, USA) was used to analyze the 18F-FDG PET/CT images. Lymph nodes shown in CT scan with or without FDG uptake in PET scan were both defined as positive lymph nodes in PET/CT. The nSUVmax was obtained by placing a spheroid-shaped volume of interest (VOI) within the PLN. The diameter of PLN was recorded as the minor axis.

Statistical analyses were carried out using SPSS statistical software (version 21.0; IBM Inc., Armonk, NY, USA) and R 3.2.2 (The R Foundation for Statistical Computing, Vienna, Austria) with the rms statistical packages. Continuous variables were described as medians with ranges, and categorical variables were described as frequencies with percentages. The chi-squared (χ2) or Fisher’s exact test was used for univariate analyses and the correlations between histopathology and nSUVmax and PLN metastasis. Logistic regression was performed for multivariate analyses, and a nomogram was built based on the training cohort of 241 patients. The performance of the nomogram was assessed internally and externally by discrimination and calibration. The concordance index (C-index) was used to determine the discriminative ability by calculating the area under the receiver operating characteristics curve (AUC-ROC). The calibration of the model was performed by comparing the predicted and actual probability of PLN metastasis. For internal validation, the nomogram was subjected to 1,000 bootstrap resamples in a training cohort, and the model was applied to the validation cohort for external validation. We also analyzed the sensitivity, specificity, positive predictive value (PPV), negative predictive value (NPV), and PET/CT accuracy alone and nomogram in each cohort. All statistical tests were two-sided, and P<0.05 was considered statistically significant. 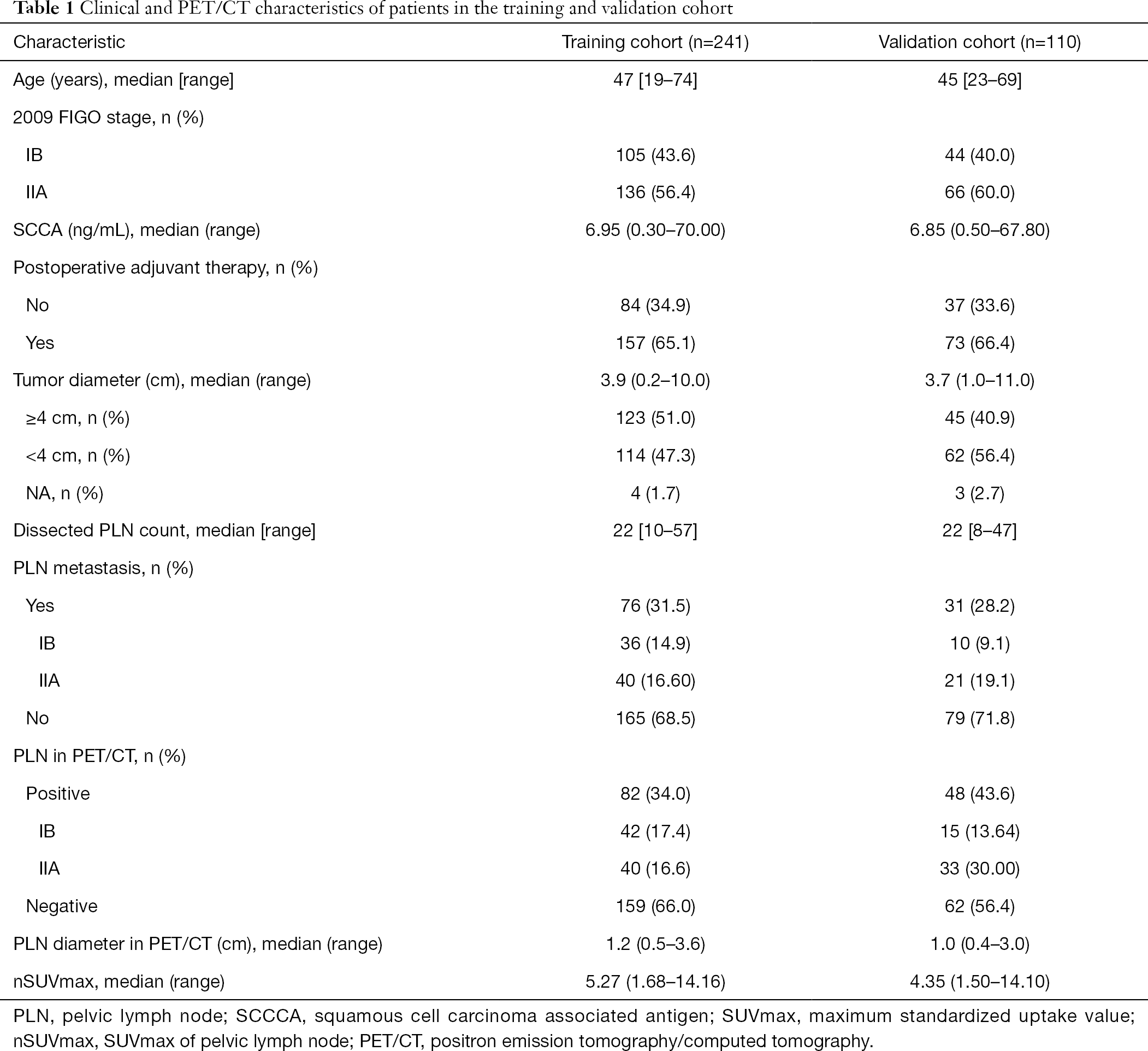 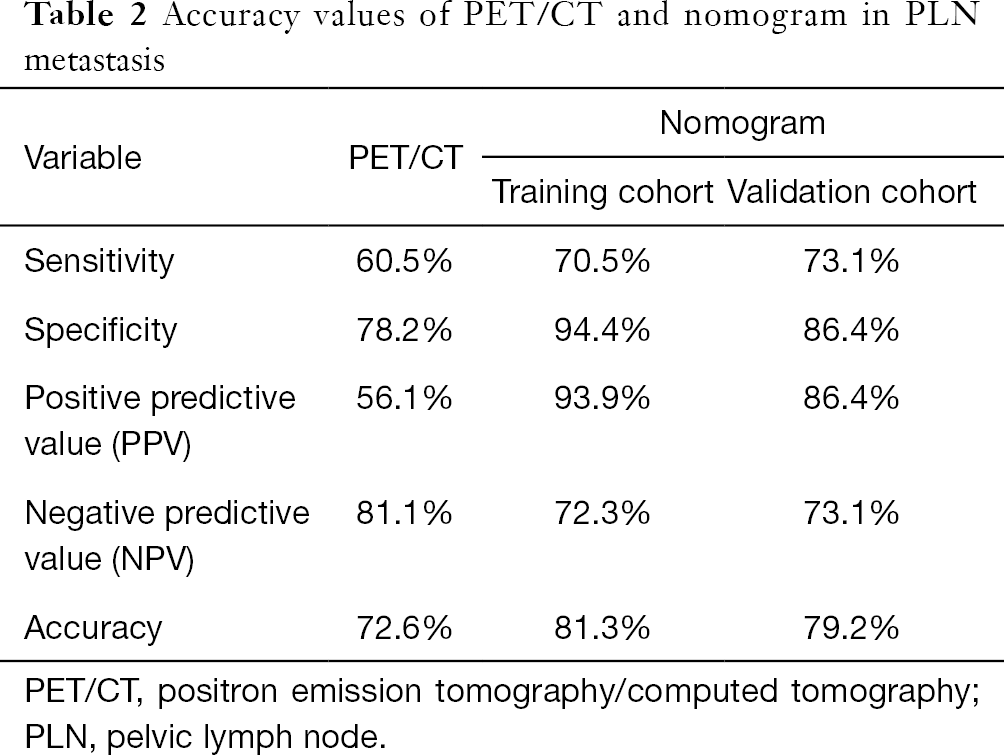 The correlations between histopathology and nSUVmax, PLN metastasis in the training cohort

There were 162 (67.2%) patients who were non-keratinizing, and 57 (23.7%) were keratinizing squamous cell cancer. After surgery, the median (range) of Ki-67 was 80% (10–95%). Twenty-four (10.0%) of tumors expressed Cyclin D1, and 72 (29.9%) expressed P53 according to postoperative IHC. We further analyzed the correlations between these histopathological indexes and nSUVmax and PLN metastasis. However, none of these variables had associations with nSUVmax or PLN metastasis. These results are shown in Table S1. 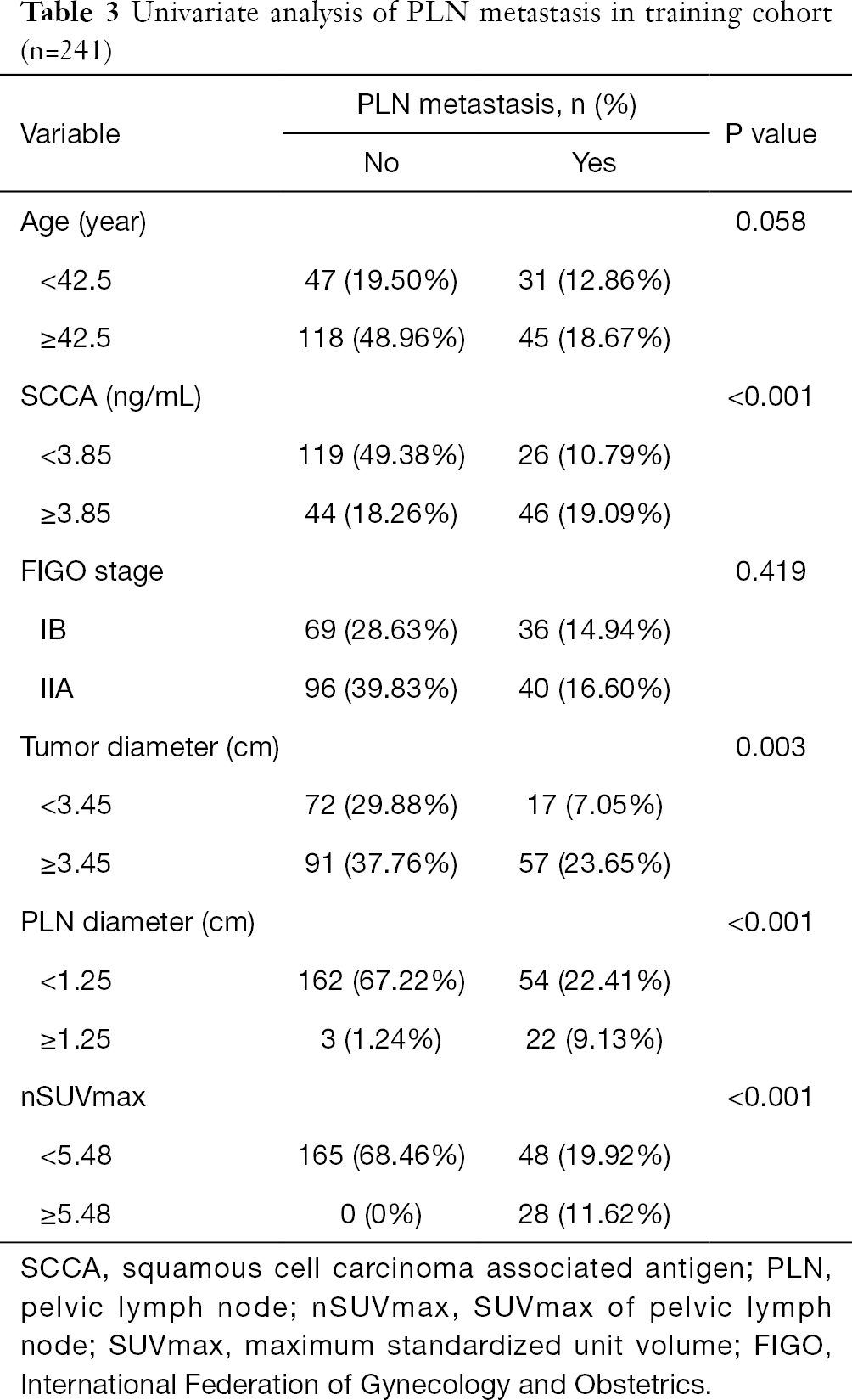 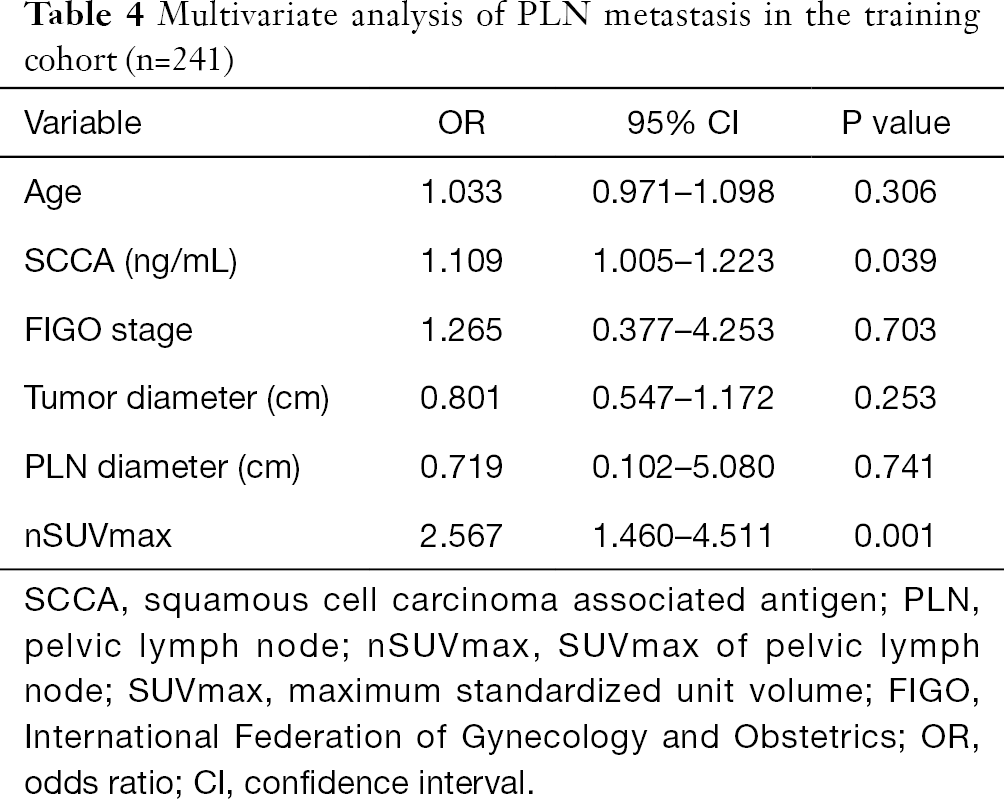 Performance of the nomogram

To provide a visualized and individual model for predicting PLN metastasis, we developed a nomogram based on SCCA and nSUVmax, according to the logistic regression analysis (Figure 1). The nomogram was then validated internally and externally. 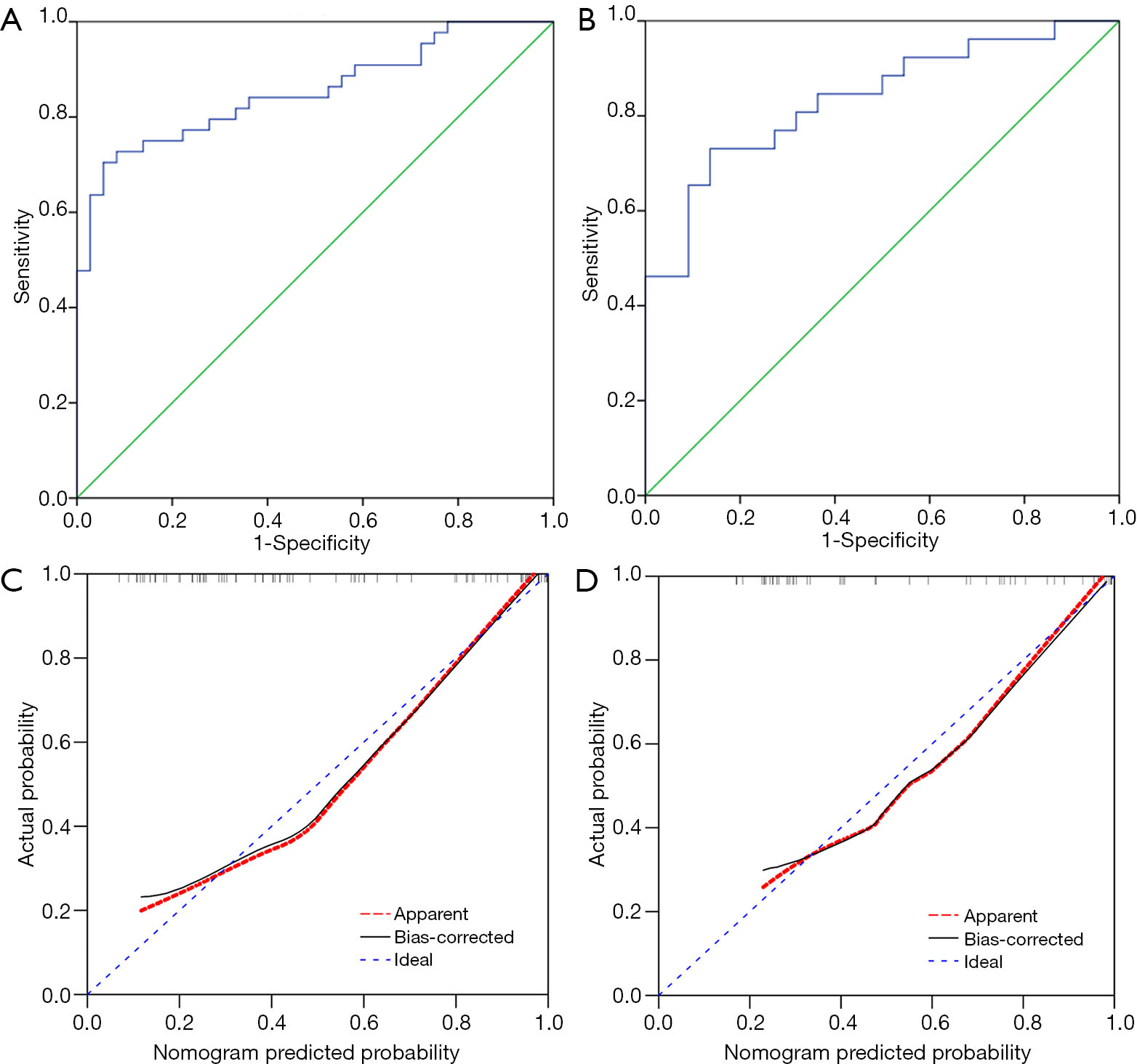 Figure 2 Performance of the nomogram for predicting PLN in patients with early-stage cervical squamous cancer. After 1,000 repetitions, the bootstrap-corrected C-index of the model was 0.854 (95% CI, 0.772–0.937) and 0.836 (95% CI, 0.723–0.948) in the training (A) and the validation cohort (B), respectively. (C,D) Calibration curves of the nomogram for the training (C) and validation cohort (D). Perfect prediction would correspond to the blue dashed line. The red dotted line represents the entire cohort. The black solid line is bias-corrected by bootstrapping indicating observed nomogram performance. The predicted probability was close to the actual observed outcome in calibration curves, which showed good agreement. PLN, pelvic lymph node; CI, confidence interval.

Our study demonstrated that SCCA and nSUVmax were independent predictors for PLN metastasis of early-stage cervical squamous cell cancer. Based on these 2 parameters, we successfully established a noninvasive and convenient nomogram with improved predictive ability.

Up to 20% of clinical early-stage cervical cancer patients had lymph node metastasis (2). Those patients face undergoing both radical surgery and postoperative chemo-radiation. Thus, the FIGO staging for cervical cancer was revised in 2018, and retroperitoneal lymph node metastases are now regarded as stage IIIC. The treatment strategy has been altered for these patients accordingly (6). Both radiological evaluation and pathological findings could assign the stage in addition to clinical examination and are recorded as stage IIIC (r) or stage IIIC (p), respectively (6). However, diagnostic lymphadenectomy is invasive and may cause short- and long-term complications, and about 80% of clinical early-stage patients might receive little benefit from the procedure (2,12,17,18). Thus, it is crucial to find an accurate and noninvasive radiologic modality for preoperative PLN metastasis assessment.

Several radiological modalities, such as CT, MRI, and PET/CT, have been suggested for preoperative cervical cancer (19). Previous studies indicated that PET/CT was superior to CT and MRI for retroperitoneal lymph node assessment, with sensitivity and specificity of 48.6–82% and 75–98%, respectively (7-12,20,21). Our study showed a similar diagnostic accuracy of PET/CT scan alone. However, up to 30 (12.4%), PET/CT negative patients had pathological metastatic lymph nodes (LNs), which is consistent with previous reports (20,22). Also, similar to Jung et al.’s findings (23), only 46 (56.1%) PET/CT-positive PLNs were pathologically confirmed. Thus, the discrepancy between the PET/CT scan and pathological findings limited its clinical application. Although recent studies added radiomics to the PET/CT scan to obtain more comprehensive and improved data for PLN metastasis prediction in cervical cancer, the complexity and technological immaturity limited its clinical application (14-16).

We aimed to explore a simple and effective PET/CT scan-based method for PLN metastasis prediction of cervical cancer. Thus, we incorporated preoperative clinical and PET/CT parameters regardless of postoperative histopathologic risks and successfully gleaned an individualized and easy-to-use nomogram for preoperative PLN involvement prediction. Kim et al. (12) also reported a PET/CT based nomogram for PLN involvement prediction in early-stage cervical cancer, with improved sensitivity (72.1%), specificity (84.4%), and a good calibration and discrimination in external validation. These results were consistent with our study; nevertheless, there were still several points of difference between their study and ours. Firstly, since histopathological type is an acknowledged predictive and prognostic factor for cervical cancer, we investigated the most common pathological type, squamous cell cancer, as a homologous group. Moreover, since a considerable proportion of metastatic lymph nodes were <1 cm in diameter for cervical cancer, we enrolled a functional parameter, nSUVmax, to compensate for the diagnostic difficulty. Finally, we provided a much simpler nomogram, including only the preoperative SCCA level and nSUVmax, and yielded a similar predictive efficiency for PLN metastasis in early-stage cervical squamous cancer.

Many studies examining relationships between SUV and expression of different histopathological parameters have reported on uterine cervical cancer (16,24) and other malignancies (25-27). However, different results were obtained among various tumors. Unlike the above studies, our study focused on the FDG uptake of PLN, not the primary tumor. However, none of the squamous type, Ki-67, the expression of Cyclin D1, or P53 had relationships with nSUVmax. Furthermore, the research regarding relationships between histopathological indexes and PLN metastasis in uterine cervical cancer is limited. However, none of these indexes could predict PLN metastasis.

The current study had some limitations. It was a retrospective study with potential recall bias. Also, although we validated this model internally and externally and the model fits well, prospective studies are still required to confirm the predictive value of this nomogram in a multicenter clinical practice setting.

Conflicts of Interest: All authors have completed the ICMJE uniform disclosure form (available at http://dx.doi.org/10.21037/qims-20-348). The authors have no conflicts of interest to declare.

Ethical Statement: This study was approved by the ethics committee of Fudan University Shanghai Cancer Center (050432-4-1212B). However, no informed consent was required for patients due to the nature of a retrospective study.