English is the most widely used language in medical community worldwide, and the state-of-the-art medical knowledge is usually firstly reported and shared in English language. Therefore, it is of paramount importance to master English for medical practitioners. The benefit of English language skills for one’s medical career will include at least three aspects: (I) acquisition of medical advances more efficiently, thereby providing the most updated caring for patients; (II) more wide communication with colleagues from other countries; (III) reaching one’s own study results to the most wide audience. English language as a second language may be an explanation for the international variations in performance the United States medical licensing examination step 2 clinical knowledge component (1). In eastern Asia British Commonwealth areas, it is common to use English in their daily practices (2).

Chinese doctors have a population of two millions and form the largest medical community in the world. They communicate with each other by using Mandarin within the community. However, recently the communication and interaction between China and other parts of the world increased exponentially. As a result, medical English has been incorporated into education as a compulsory course for medical doctors. However, it is still largely unknown to what extent Chinese doctors use English language in their professional life. To the best of our knowledge, there has been no study conducted yet focusing on English language usage pattern among mainland Chinese doctors. The present survey aimed to explore the English language uses among Chinese doctors in their professional life, which may provide further evidence for medical English curriculum adjustment at both undergraduate and postgraduate levels.

An online cross-sectional survey was carried out during the period of 23 Oct 2014 to 13 November 2014, totaling 22 days. The survey was conducted on the platform provided by DXY (www.dxy.cn), which is the largest medical and paramedical related website in China with registered medical doctor users of slightly more than one million. An email was sent to all DXY registered users to invite them to participate a five-minute survey. To increase the participation rate, a token bonus would be awarded to the DXY users who completed this survey. This token bonus allows the user to download materials from DXY website.

A questionnaire was designed for this survey, which included three major aspects: (I) the demographic characteristics of participants, including age, gender, hospital grade, career year, degree (Appendix 1), professional grade and overseas experience; (II) English reading pattern, including first consulting material when encountering clinical difficulties, familiarity with English journals and textbooks of participants’ specialty; and (III) paper publishing experience in international journals, including the number of paper published in English international journals and whether English professional editing service is required.

To accommodate the complexity of relationships among variables, structural equation modeling (SEM) was employed to build the model (Appendix 2).

In total 1,663 DXY users completed the survey, which counted for ≈1% of the total registered medical doctor users. The distribution of participants is shown in Figure 1. There were participants from all provinces or regions in China mainland except Tibet autonomous region. Metropolitan Beijing had the largest number of participants (10.28%), followed by Guangdong Province (9.38%), Jiangsu Province (8.90%), Metropolitan Shanghai (7.27%) and Zhejiang Province (6.85%). These figures indicated that there were more participants from relatively economically developed eastern coast areas, probably due to the fact that doctors in these regions have more access to internet. Figure 2 shows the distribution of participants among different clinical disciplines. Internal medicine and surgery specialties counted for more than half of all the participants, followed by oncology, neurology, and radiology. 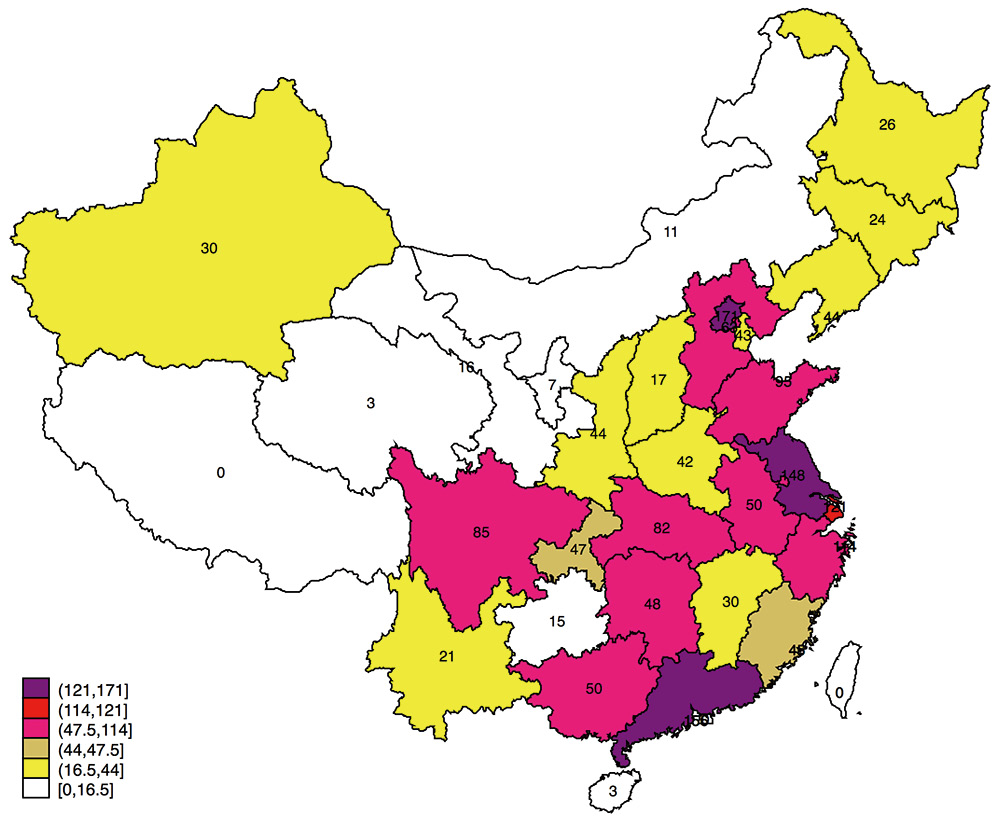 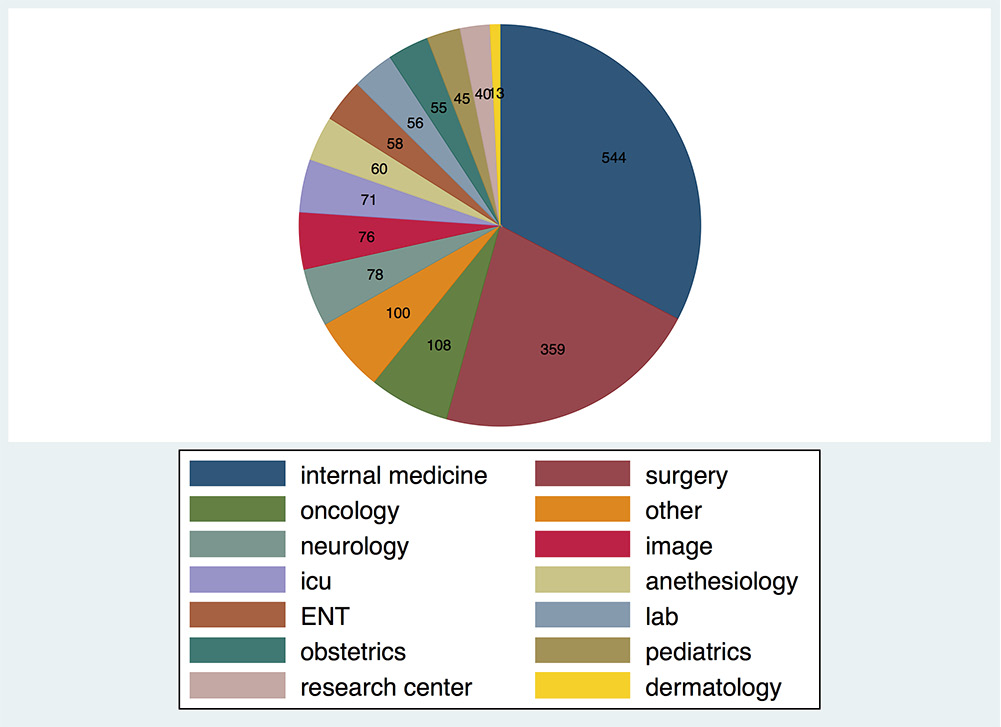 To seek information of participants’ familiarity with English journals, participants were asked to list up to four English journals of their own specialty. Abbreviation and minor typo were allowed. General answers such as Nature was were not allowed unless the participant was a laboratory scientist; if the participant was a radiologist, then general answers such as New England Journal of Medicine was not allowed as this journal is not his/her own specialty journal, and he/she is unlike to read this journal with good frequency though he/she might be aware of this journal exists. The results of this question are shown in Table 1, and a subgroup of doctors, named Group A doctors who are of attending specialist grade (zhuzhi yishi) or above in teaching hospitals was additionally analyzed separately.

When asked whether they have read at least one English paper or one professional book in English, most participants responded they did (82.86% for all participants, 93.71% for group A doctors), 17.14% (6.29% for group A doctors) responded they never read one single English paper or professorial book in English. Six hundred and seventy-two participants (40.41%) reported they were aware of classic English textbook in their field. Five hundred and ten participants were able to name one text book in English, while 162 gave the name in the books’ Chinese name, probably they were familiar with the Chinese translation of the text book.

When asked whether they have published research papers in English international journals, 30.42% participants (55.85% for group A doctors) reported they published at least one paper in English journals as the main author or as a co-author. Further information on how many papers they published as a main author is shown in Table 2.

Of the participants, there were 28 doctors published more than ten papers as a main authors (named ‘prolific writers’ thereafter). Among them there were four females, and the rest were males; the median age was 37 (range: 28-57) years. Twenty-four of these prolific writers work in teaching hospitals, one works in university; three work in grade-III hospitals. Seven of them had post-doctoral experience; 15 were doctor degree holders; five had master degree; while one held a bachelor degree. 46.43% (13/28) had no oversea experience. All prolific writers hold attending specialist (=13, 46.43%) or above professional grades. 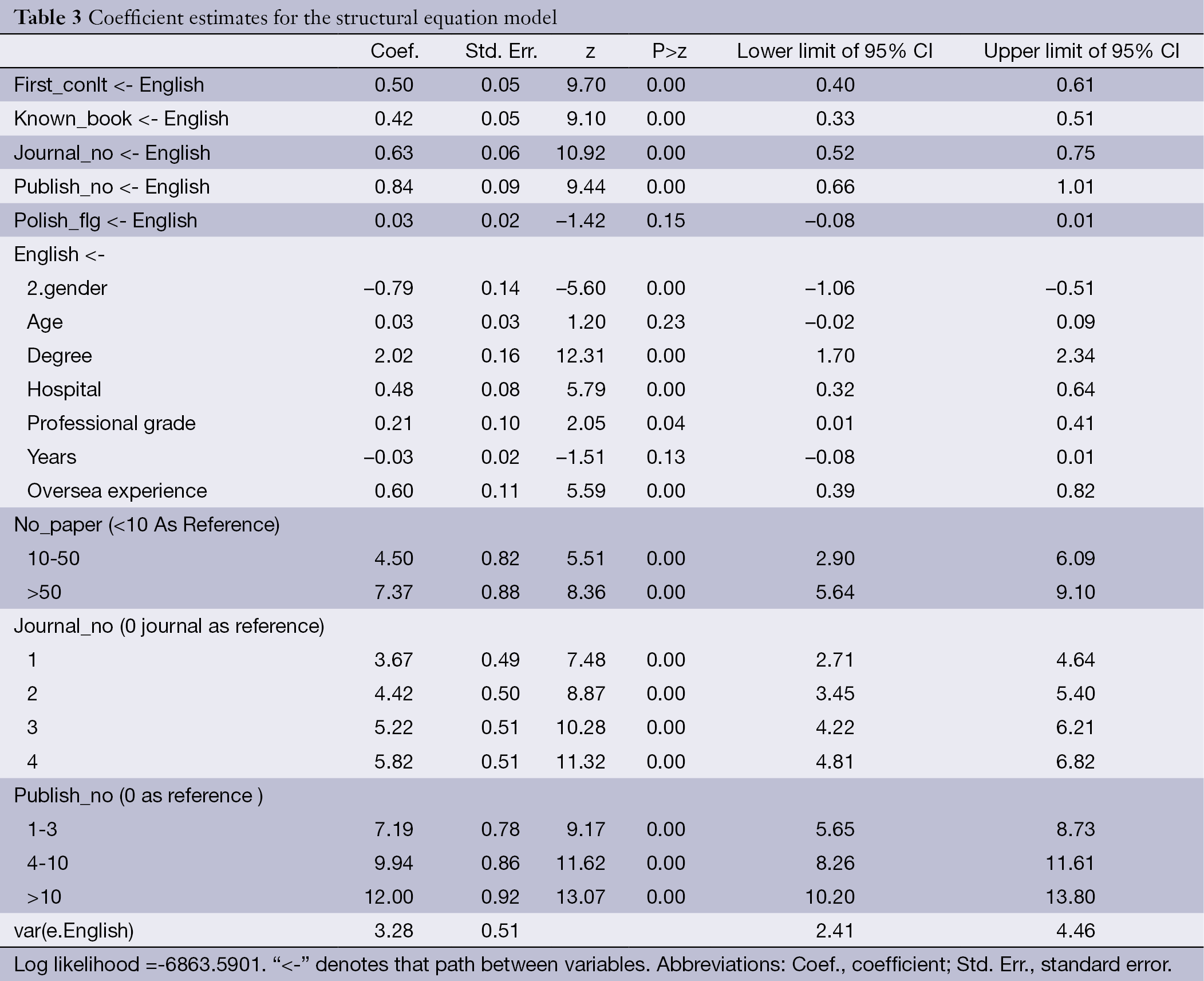 This is the first survey conducted aiming to explore the current status of English usage pattern in mainland Chinese doctors. Our study demonstrated that higher degree, hospital grade, overseas experience and professional grades were independently associated with English proficiency. However, career years and age were not associated with English proficiency. Doctors with higher degree are more likely to be employed by hospitals of higher grades, while doctors with bachelor degree or associate degree tend to work in smaller township hospitals. It is not surprising that doctors with higher levels of education and from teaching academic hospitals were more sophisticated in English, both reading skills and publishing experience. Furthermore, doctors from teaching hospitals and universities have more opportunity to go abroad and are more likely to be exposed to English language environment.

The results in Table 1 is a little surprising, considering that close to 30% of respondents with attending specialists grade or above were not able to list a English journal of their own specialty. This is somewhat in contrast to the answer that 82.86% had read at least one English paper or one English professional book. However, this could be due to that there was a long time gap between the participants read the English literature and they answered the survey. Only about one third participants could fully list four English journals’ name. This results illustrate overall English literature usage should be much improved. On the other hand, one surprising finding from this study is that with the prolific writers who had published more than ten papers in English journals as a main author, 46.43%, i.e., almost half, did not have oversea experience, though this survey did not seek for the impact of their publications.

The limitations of the study include that the sample might be biased and did not reflect the true status of English usage pattern among mainland Chinese doctors. For example, doctors from less developed areas are likely less accessible to on-line survey. Teaching hospital doctor counted for 54.72% of the current survey participants. Furthermore, the participants were all registered DXY website user, their internet skills as well as English skill may be better than the non-DXY-users on average, also it is possible that those willing to take participate this survey might have better English skill than those did not respond. Another possibility is that young doctors are more likely to respond to the survey than well-established and busier senior doctors.

In conclusion, our study provides the first survey on English language usage pattern of Chinese mainland doctors. Mainland Chinese doctors were more likely to consult medical materials in Chinese when they encounter clinical difficulties. 44.02% of the participants could not name one English journal of their own specialty. 30.42% participants published at least one paper in English journals, and approximately half of them require professional English editing service. This limited survey suggests to improve English education at the undergraduate and post-graduate levels should be recommended. We would also like to advocate making authentic Chinese translation of high quality international educational journals, such as Radiographics in the case of radiology specialty, available to Chinese doctors.

We constructed a latent variable named English to represent English language skills. Latent variable is a virtual variable that cannot be measured or observed but it can be reflected by other observed and measured variables. As in our case, English language skills cannot be directly measured but can be reflected by using reading skills and publishing experiences. We hypothesized that participants’ characteristics influenced their English language skills. The path diagram of SEM was shown in Figure 3. Boxes with variable names inside them are observed variables that we obtained directly from survey. The Circle with variable name English within it is the latent variable that we constructed theoretically. The arrows (or paths) represent the hypothesized relationships between variables. When a path points from one variable to another, it means that the first variable affects the second. Small numbers written along the arrow connecting two variables were estimated coefficient after running the model estimation.

In this model, English language skills (variable Engish) were influenced by gender, age, diploma, hospital (hospital level), rank (e.g., residence, fellow etc.), years (career years) and oversea. There was an error term named ε1 for English. English language was reflected by five variables including no_paper (the number of paper one has read), first_conlt (first consultation material English or Chinese when one encounters clinical difficulties), known_book (the classical textbook one knows), journal_no (the number of international journals one can enumerate in their field), publish_no (the number of paper one has published in English journals), and polish_flg (whether one need English language editing service when publishing a paper). Generalized SEM allows for different distributions of dependent variables. For example, the variable polish_flg assumed Bernoulli distribution and the link function was logit. Distributions and link functions of other variables are denoted in Figure 3. The number of the variable 2.gender denotes the variable was an indicator variable that male was used as reference.

Identification refers to the conceptual constraints on parameters of a model that are required for the model’s remaining parameters to have a unique solution. The order condition dictates that if a model has K observed variables, then your data contain K(K+1)/2 second-order moments, and thus p, the number of parameters based on second-order moments that can be estimated, cannot exceed K(K + 1)/2. In our model we had 14 free parameters which was much smaller than K(K+1)/2=15*(15+1)/2=120. This indicates that the model can be identified (not sufficient condition).

We used maximum likelihood method for coefficient estimation for each equation. For equations with link function logit, we perform exponentiation of the coefficient to obtain odds ratio for better interpretation.

All statistical analyses were performed by using the software Stata 13.0 (College Station, Texas 77845, USA). Two-tailed P<0.05 was considered to be statistically significant.