Epidermal nevus syndrome (ENS) is a term used to represent a diverse group of neurocutaneous diseases in which one of the subtypes of epidermal nevi (EN) are found in association with extracutaneous abnormalities involving the eyes, nervous, skeletal, and urogenital systems (1). Most EN are present at birth and typically follow the lines of Blaschko (2). Blaschko’s lines refer to the S-shaped or V-shaped whorled, streaked, and linear patterns that are believed to represent the dorsoventral migratory pathways of the neuroectoderm during embryogenesis (2). The incidence of EN has been reported to range from 1 to 3 per 1,000 live births, without gender predominance (2,3). Numerous phenotypes with different clinical appearances and histopathological features have been described (4), such as the nevus sebaceous syndrome (NS), nevus comedonicus syndrome (NC), phakomatosis pigmentokeratotica (PPK), proteus syndrome, and congenital hemidysplasia with ichthyosiform erythroderma and limb defects (CHILD) syndrome (5). In terms of CNS abnormalities however, hemimegalencephaly (HME) is the most striking finding, typically found on the side of the skin lesion, associated often with polymicrogyria (4,6). Other neuroimaging findings can be grey matter heterotopia, atrophy with dystrophic calcification and hamartomas (7,8). Cerebellar involvement has also been described. Vascular abnormalities are rare, including vessel dysplasia and infarction (9). The molecular basis of ENS spectrum is unclear. The syndrome has been observed sporadically in the relatives of affected patients. It has been hypothesized that it is a form of mosaicism of a lethal autosomal dominant gene (5,10). Recent reports of somatic mosaicism in the pathogenesis of ENS have been reported, along with the identification of HRAS and KRAS mutations (11,12). 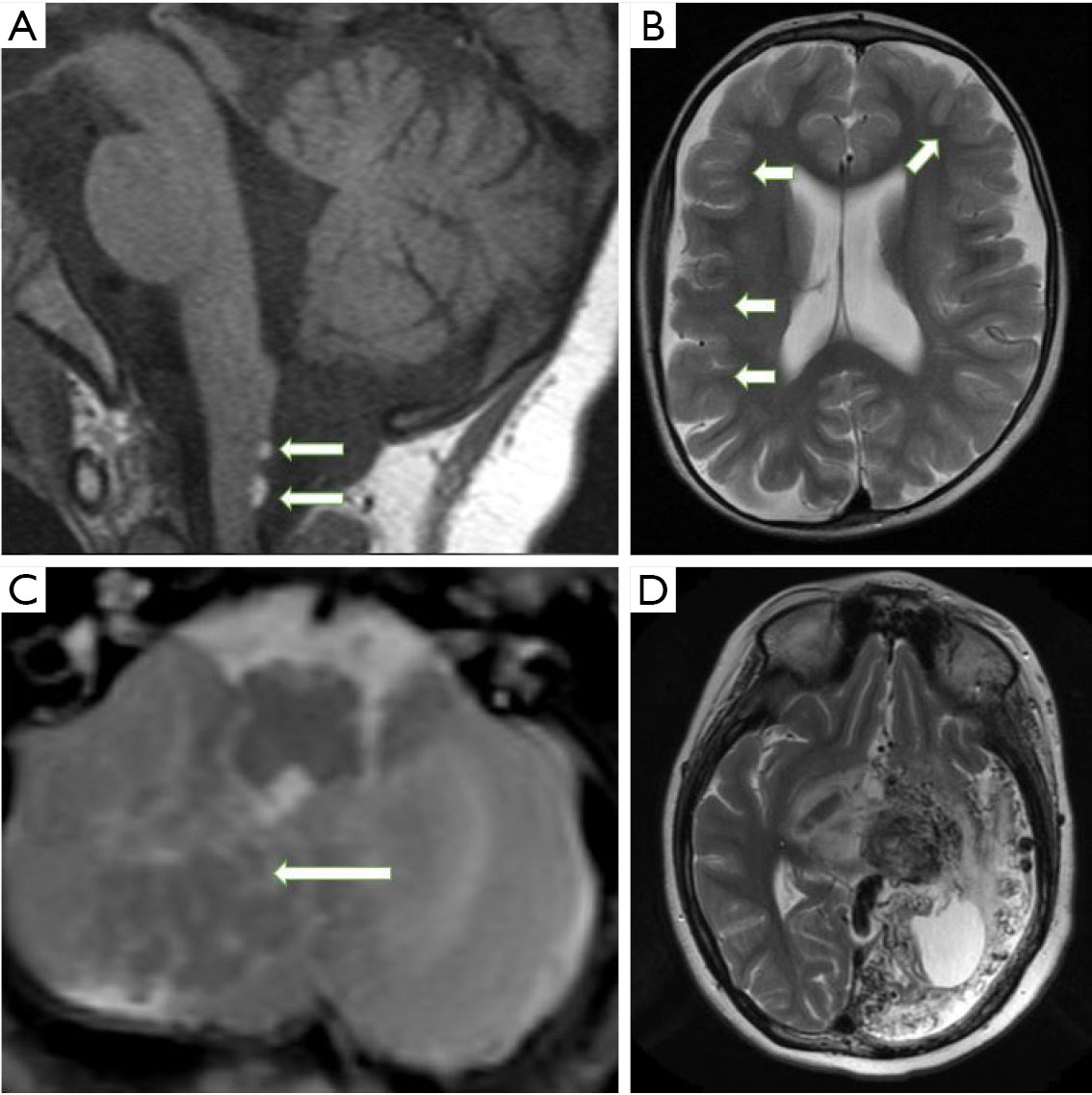 A female infant presenting with right-sided seizures at week 1 of life, with evidence of an epidermal nevus of the neck and right cheek noticed at 6 months of age. Right hemifacial hypertrophy, prominent right eye with associated exotropia and congenital nystagmus were noted on examination. Brain MRI at 1 month of age showed right cerebral HME with extensive areas of cortical dysplasia and associated neuronal migrational abnormality within the cerebellum, consistent with heterotopic grey matter (Figure 1C).

A 7-year-old girl was diagnosed with a large left neck and cheek epidermal nevus. Left cerebral arterio-venous malformation was diagnosed when she presented with right sided weakness and refractory seizures. She underwent multiple embolizations. Historical images were not available but CT scan and MRI scan at age 18 showed a left-sided extensive proliferative arteriopathy with associated brain atrophy (Figure 1D).

An 8-year-old boy presenting with vomiting and headache. He was noted to have a right facial nevus. Brain MRI revealed a large medulloblastoma in the posterior right cerebellar hemisphere which was resected in 2015 (Figure 2A). He had a large local recurrence 3 years later. 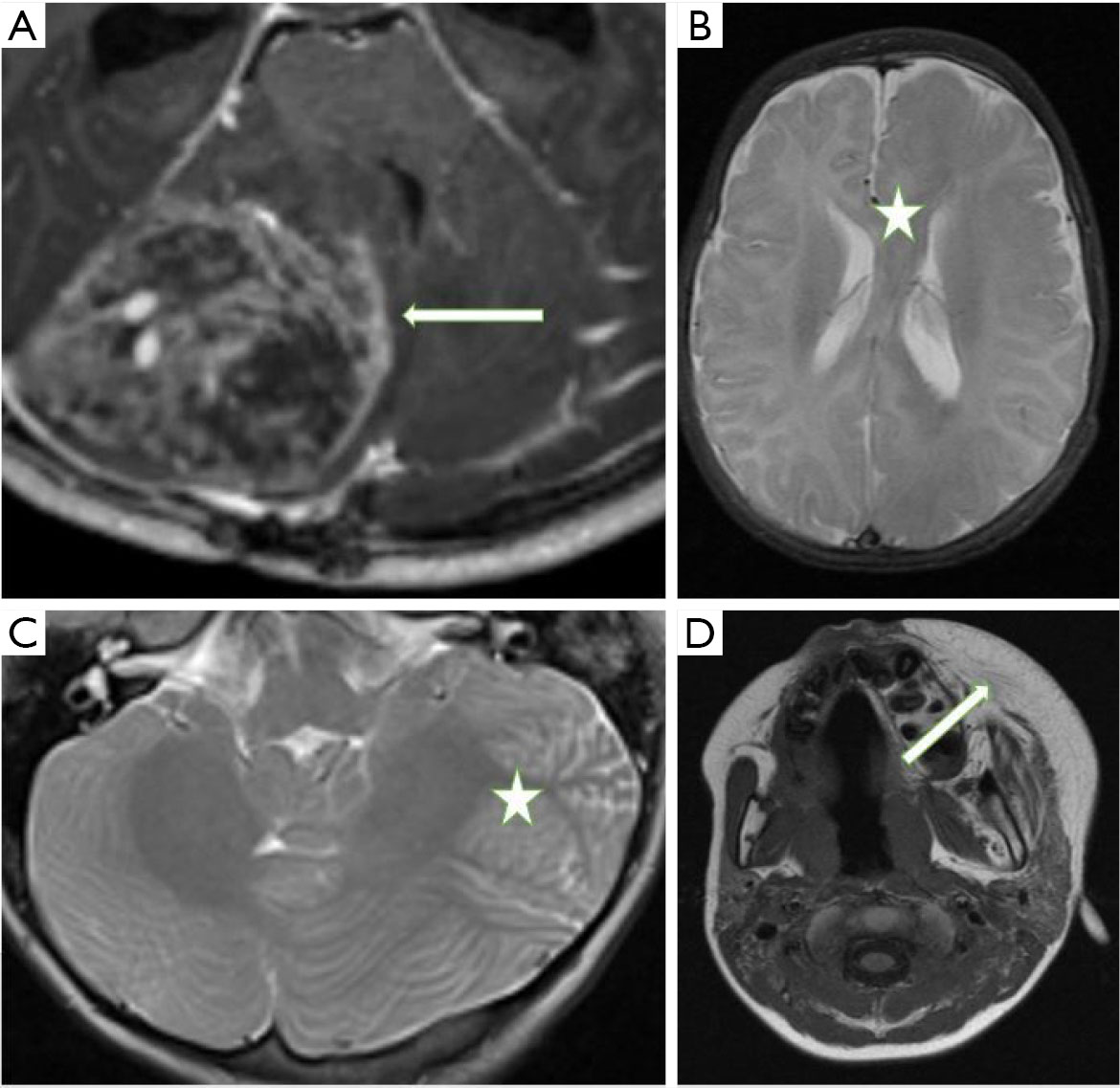 ENS is not one disease, but rather a heterogeneous and diverse cluster of different disorders which have been categorized together (10). Several specific syndromes with overlapping features have been described, namely, the NS syndrome, Proteus syndrome, PPK (coexistence of nevus sebaceous with melanocytic nevi) and Keratinocytic ENS (10-14). These have been summarized in Table 1.

The cutaneous features of ENS depend on the predominant cell type involved histologically, the degree of cellular differentiation, the body site involved, and the age of the patient. EN typically follow several well recognized patterns of cutaneous mosaicism, typically “the lines of Blaschko” (2). Various methods of classifying EN have been proposed over the years. The concept that nevi may show differentiation towards various skin structures and glands, comprising of pilosebaceous, apocrine, eccrine glands and keratinocytes, has been the basis of most clinical classifications to date (5,15). The two main subtypes are Nevus sebaceus (with excessive sebaceous glands components) and Keratinocytic EN (lesions without any adnexal components).

In terms of the genetic basis of ENS, the published evidence suggests that the clinical expression of ENS is based on genomic mosaicisms (16). The primary genes thought to be responsible for ENS are the ones involved in the Ras/MAPK signaling pathways; hence the term mosaic RASopathies is commonly used (11). The genes involved in the pathway include KRAS, HRAS, NRAS and FGFR1 (11,17,18). FGFR2 and FGFR3 mutations have also been reported to be involved in some cases (11,19).

Sebaceous Nevi are mostly located on the scalp or face, although they can be more widespread. They have a salmon to yellow color and a characteristic smooth waxy surface and can be complicated by eczematous reactions (14). Keratinocytic EN (KN) are another type of EN typically found on the trunk and extremities. They appear as linear or whorled skin-colored to pink or slightly hyperpigmented plaques that may be unilateral or bilateral.

Central nervous system involvement has been noted to be the most commonly described systemic association with ENS, presenting with a constellation of signs and symptoms ranging from headaches, epilepsy, focal motor deficits and developmental delay (20). Ophthalmological findings described include epibulbar lipodermoid, coloboma, corneal opacities and defects of the optic nerves, while associated skeletal abnormalities are craniofacial defects, frontal bossing, kyphoscoliosis, hip dislocation and limb deformities (21,22).

Spanning the last 20 years, some cases of ENS have been published describing their neuroimaging manifestations, as summarized in Table 2. Our search strategy on PubMed, developed in consultation with a librarian with expertise in health research and systematic reviews, included terms related to ENS HME (in studies published from 1995). A broad approach was taken through the inclusion of all possible synonyms and abbreviations for the terms of interest, and controlled vocabulary/ subject headings (including MeSH, EmTree).

HME is the most common structural brain abnormality encountered in the different subsets of ENS. As a corollary, ENS is the most common neurocutaneous disorder associated with HME (28). The distinctive triad of hemifacial EN, ipsilateral HME, and lipoma was first described by Gross and Uiberrak in 1955, who introduced the term “hemimegalencephaly.” Pavone and colleagues also reported HME in 17 out of 60 patients with ENS, their study being a review of the literature and based on pathology or CT studies (28). Menascu et al. (25) described MRI abnormalities in 3 patients with ENS showing HME, polymicrogyria and cortical heterotopia while Pavlidis et al. (26) reported a boy with right ‘total’ HME, with increased volume of both cerebellar and cerebral right hemisphere.

In our series, HME was found in 4 patients out of 7, mostly right-sided. 2 of these patients showed both cerebral and cerebellar involvement. Furthermore, HME was always ipsilateral to the epidermal nevus.

Dodge et al. showed severe hypoplasia of the cerebellum with upward rotation of the vermis and a large retrocerebellar cyst in a 6-month old girl with infantile spasms (23). Also, Ullah et al. (27) reported cerebellar atrophy and cerebral cortical dysplasia in a 25-year-old girl. Abdelhalim et al. (6) reported an infant with ENS characterized by enlargement of both cerebral hemispheres, malformed basal ganglia, and unilateral enlargement of cerebellar hemisphere with disorganized folia.

Infratentorial anomalies were shown in 5 patients of our series, represented by HME, atrophy (unilateral and bilateral) and cerebellar heterotopia.

Intracranial and intraspinal lipomas represent rare manifestations of ENS; 2 patients from Booth et al. (9) showed the presence of subpial lipomas dorsal to the cervicomedullary junction, in association with very subtle dysplasias involving the cerebral cortex ipsilateral to the nevi. Left orbital and left cerebellopontine angle cistern lipomas were present in the series from Canyigit et al. (24).

We found 2 dorsal cervicomedullary lipomas in 1 patient, in association with cerebral and cerebellar atrophy.

Juan et al. (29) revealed multiple sites of intra-thoracic and abdominal arterial stenoses and aneurysm formations in association with ENS in one patient, while Canyigit et al. (24) reported a 27-month-old boy with thinning of the left internal carotid artery (ICA) with occlusion at the T-junction.

We had one case with the presence of a large hemispheric arteriovenous malformation that was embolized on multiple occasions.

ENS overlaps with HME spectrum of disorders, some entities within both these two groups being caused by similar mutations in the mTOR pathway. As such, HME with the co-existence of an epidermal nevus is very specific for ENS.

ENS is a rare spectrum of neurocutaneous disorders, all characterized by the presence of different types of EN with associated extracutaneous manifestations. CNS symptoms are common and ocular, skeletal and urogenital findings can be associated. Intracranial involvement is best evaluated with MR imaging and neuroimaging findings range widely, with the most common finding being HME. Rarer findings include intracranial/intraspinal lipomas, vascular anomalies and neoplasms.

Conflicts of Interest: All authors have completed the ICMJE uniform disclosure form (available at http://dx.doi.org/10.21037/qims-20-634). Dr. KM serves as an unpaid Associate Editor of Quantitative Imaging in Medicine and Surgery. The other authors have no conflicts of interest to declare.

Ethical Statement: Written informed consent was obtained from the patients for publication of this study and any accompanying images. A copy of the written consent is available for review by the Editor-in-Chief of this journal.