Primary liver cancer and liver metastases are the main causes of worldwide cancer morbidity and mortality. Surgical resection is the primary choice for liver cancer treatment. However, nearly 70–90% of liver metastases cannot be fully removed through surgeries (1). Therefore, modern high precision radiation therapy has become an emerging approach for liver cancer treatment. However, radiotherapy for liver tumors has been confronted with two challenges: (I) low tolerance of whole liver to radiation dose (2) and (II) mobility of both tumor and surrounding organs at risk (OARs) (3). Severe radiation-induced liver disease (RILD) may occur after radiation therapy and can be classified into two types: classical and non-classical. Patients without underlying liver disease may have classical RILD such as presence of fatigue, abdominal pain, hepatomegaly and with underlying liver disease may have non-classical RILD such as jaundice and notable evaluation of serum transaminase (2). Thus, caution must be taken to deliver a desired dose to the tumor while sparing the remaining liver from overdosing. Stereotactic body radiation therapy (SBRT), delivering a few fractions of high dose radiation treatments, can provide a sharp dose gradient outside the tumor and into the surrounding normal tissue (4,5). To reduce the impact of respiratory motion on treatment accuracy, breath-hold or abdominal compression are commonly used (6-9). However, these techniques are not comfortable for patients and not compatible for patients who have expiratory dyspnea. To manage tumor motion and deformation due to respiration, four-dimensional computed tomography (4D-CT) is the current clinical standard in radiation therapy. However, 4D-CT is known to have certain limitations. A major limitation is that it has a lower soft tissue contrast, causing inaccurate OARs delineation. In addition, due to a longer scan acquisition time to acquire anatomy information for the breathing cycle period, an extra dose is delivered to patient (10). The different types of artifacts caused by data acquisition and postprocessing also limits the application of 4D-CT in radiotherapy (10).

These limitations of 4D-CT can be potentially overcome by four-dimensional magnetic resonance imaging (4D-MRI) (11,12). 4D-MRI is more desirable for target volume delineation in treatment planning since it provides both respiratory motion information and better soft tissue contrast especially for abdominal cancer (10,13,14). In free-breathing liver SBRT, 4D-MRI can be used to generate AIP for OARs contouring and maximum intensity projection (MIP) for internal target volume (ITV) determination. Two main approaches have been developed in 4D-MRI acquisition: (I) fast 3D MR sequence for real-time volumetric images acquisition (15-17), and (II) fast 2D MR sequence for continuous image acquisition (18-20). The first approach can achieve real-time 4D-MRI without additional post-processing. However, it requires fast imaging technique to acquire images with high frame rates and the image quality is low due to the lack of spatial resolution and motion artifacts (21). The second approach sorts acquisition data retrospectively into different phase, based on the breathing surrogate’s trajectory information acquired during the scan. Several works have been investigated to generate 4D-MRI with different surrogate. Paganelli et al. computed mutual information to identify the respiratory phases without using external surrogate for liver cancer (22). Cai et al. used body area as a respiratory surrogate to reconstruct 4D-MRI for lung and abdominal cancer (23). van de Lindt et al. sorted multi-slice 2D images by computing correlation coefficients between exhale image and all other acquired images to determine the respiratory phases for liver cancer (24). 4D-MRI generated from retrospective sorting technique can improve the image quality. However, the acquisition time is long, typically requiring 15–20 repeated scans (10–15 minutes) to acquire anatomic information for a breathing cycle period. Besides the limitations from currently available hardware and software, 4D-MRI is also limited to the patient breathing regularity and reconstruction method, leading to incomplete ITV in MIP (14).

The images with respiratory motion was simulated on 4D XCAT phantom (27), which is controlled by two-time curves: changes in the diaphragm height in superior posterior (SP) direction and changes in the amount of anterior posterior (AP) expansion of the chest. These two inputs are selected as 1 cm in SI direction and 0.5 cm in AP direction in this study. Given a time point in the breathing curve, organs including heart, liver, stomach, spleen and kidneys all move and deform with scaled down motions from the defined diaphragm inputs. A breathing curve was inserted as an input for the 4D XCAT phantom to simulate sequential 2D axial images with respiratory motion.

For the regular breathing motion, a sinusoidal wave with a period of 3.1 s was simulated and the sampling period for image generation was 0.77 s. The tumor diameter was designed to be 10, 30 and 50 mm to cover normal liver tumor size, with a volume of 1.5 cm3, 23 cm3 and 90 cm3 respectively. The resolution of images was 1 mm × 1 mm and the slice thickness was 5 mm. The total slice number was 50 and the repetition number of scans was 20.

For patient study, three patients with hepatic carcinoma were involved to demonstrate the feasibility. The study was approved by institutional ethics board of Duke University Medical Center and informed consent was taken from all the patients. Images were acquired with a 1.5T Siemens MRI scanner and acquired in an axial half-Fourier acquisition single-shot turbo spin-echo (HASTE/SSFSE) MR sequence, which is a T2-weighted and high-speed sequence. The following imaging parameters were used: repetition time (TR): 550–562 ms; echo time (TE): 57–92 ms; flip angle: 60–123°; slice thickness: 5 mm; pixel resolution: 1.72 mm ×1.72 mm. The repetition number of scans is 15 or 20. SS-MRI was generated using random 5 scans and total 15 or 20 scans, and the ITV relative volume difference was analyzed.

Figure 2 shows the relationship between the DSC of ITV and number of scans, and the relationship between the ITV relative difference and number of scans for MRI images generated with regular breathing motion. The red lines inside the blue box represent the median value of DSC or relative volume difference. The black spots inside the blue box represent the average value of DSC or relative volume difference. In each box, the central mark indicates the median, and the bottom and top edges of the box indicate the 25th and 75th percentiles, respectively. The whiskers are lines extending above and below each box. Whiskers are drawn from the ends of the interquartile ranges to the furthest observations within the whisker length (the adjacent values). Observations beyond the whisker length are marked as outliers. By default, an outlier is a value that is more than 1.5 times the interquartile range away from the top or bottom of the box. Outliers are indicated with a red + sign. 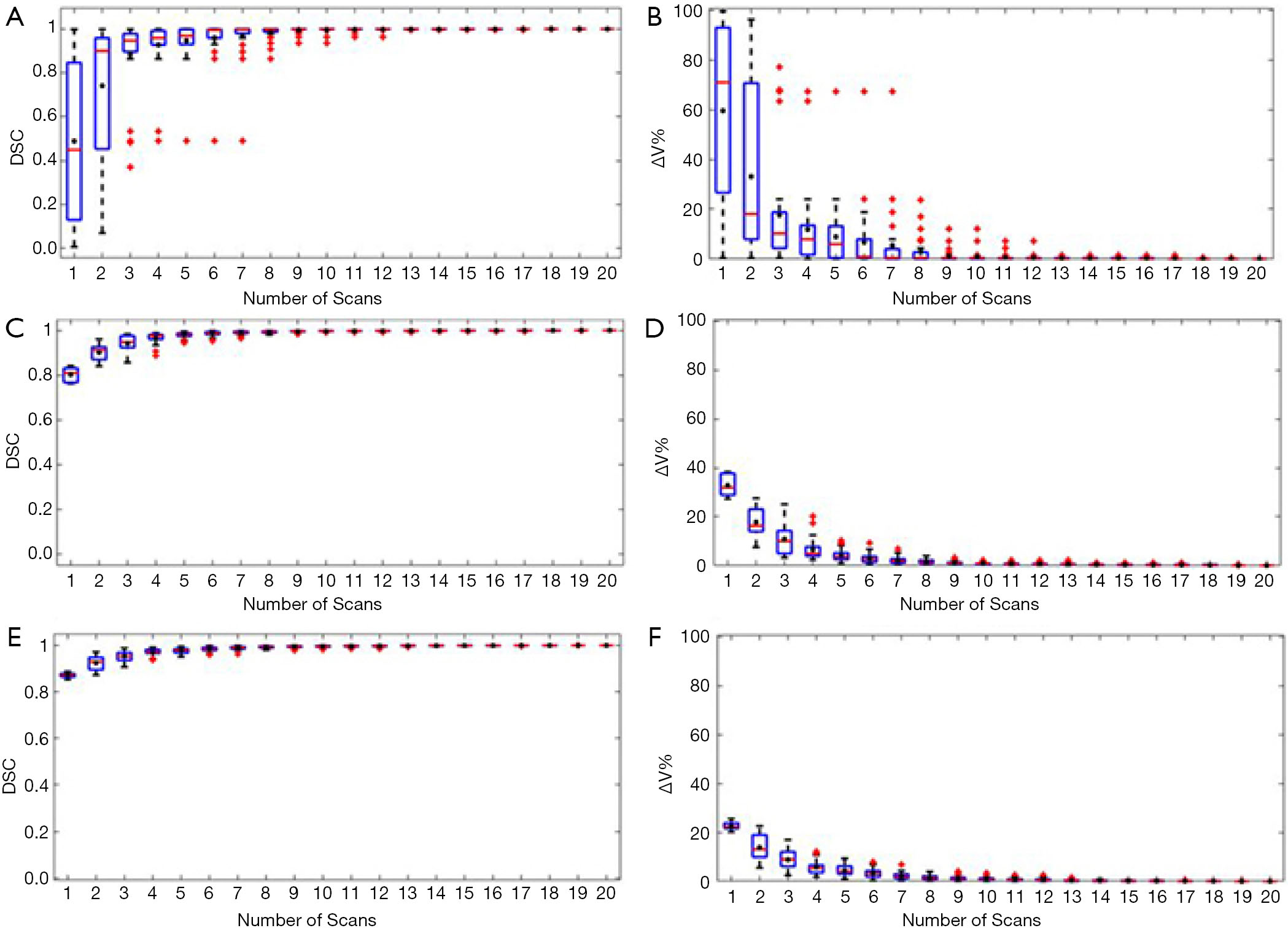 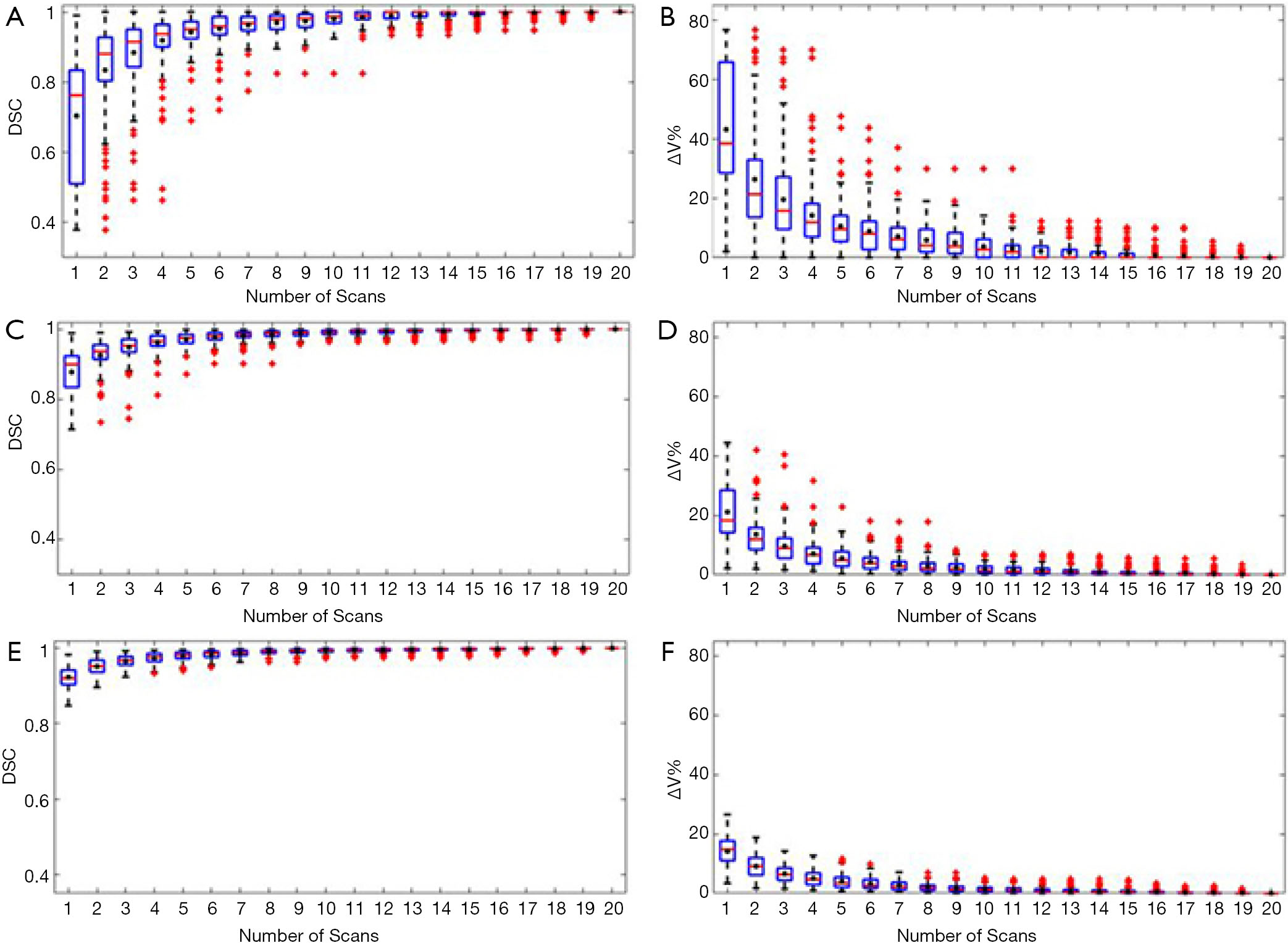 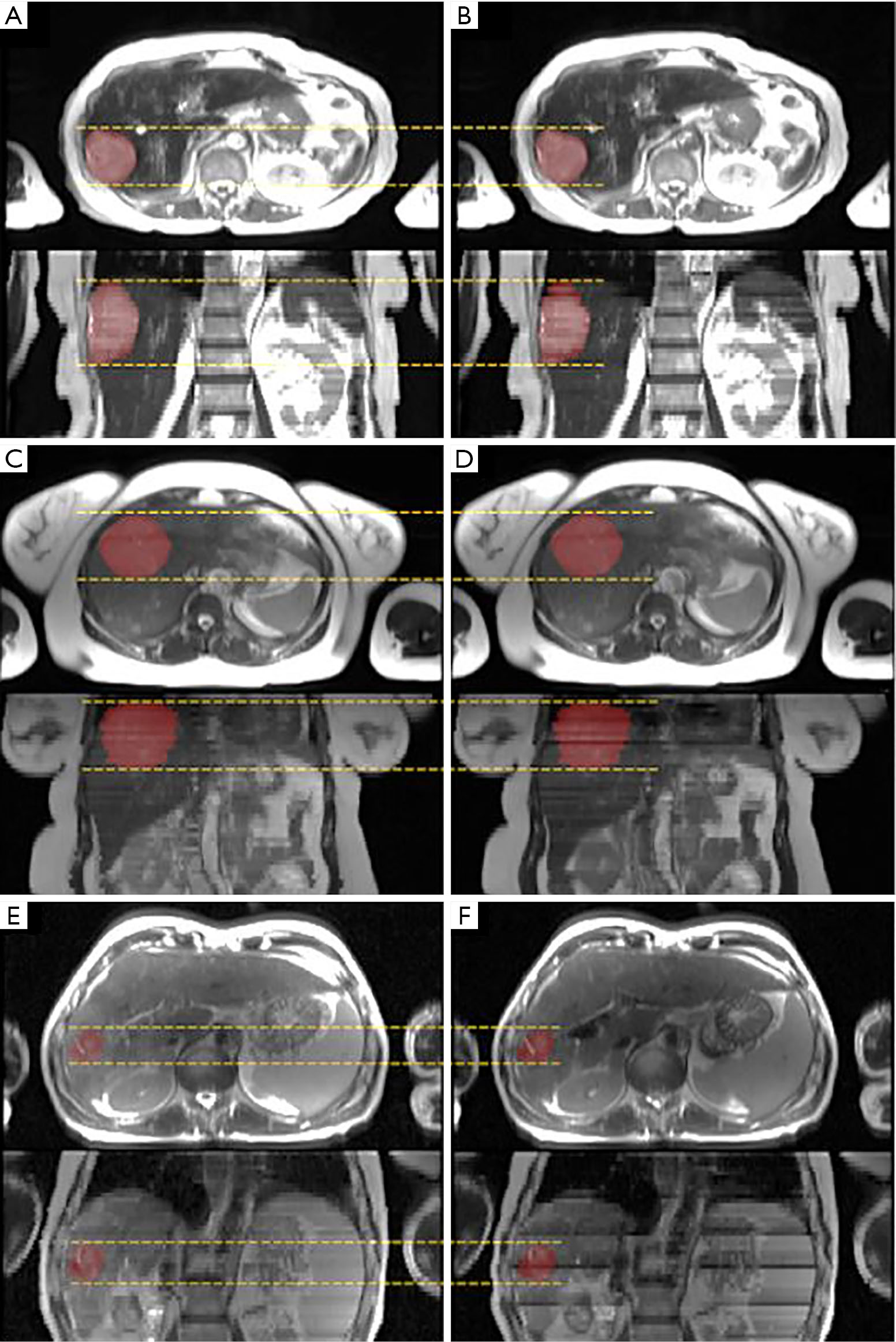 For abdominal motion, an adequate knowledge of organ range of motion is important to provide a better radiation treatment. In abdominal tumor radiotherapy, 4D imaging technique has been commonly used to manage the motion of tumor and surrounding organs and to deliver a precise dose coverage. Currently, 4D-MRI retrospective reconstruction requires high image quality and advanced post-image processing. Current investigations on 4D-MRI retrospective reconstruction requires different surrogate (24-27), which is dependent on the precision of information from surrogate. However, for 4D-MRI retrospect sorting methods, large slice thickness may not quantify motion of a small target (less than 5 mm), and the reconstructed volume may be discontinuous on slice direction. In addition, stitch motion artifacts may occur on reconstructed 4D images (11,12,29).

The proposed technique in this study is a simple and quick method to reconstruct MIP and to generate clinically acceptable ITV in radiation therapy, addressing limitations of 4D-MRI retrospective reconstruction. In this study, we used all acquisition images instead of 4D-MRI to generate MIPref and ITVref. Using all acquisition images as reference can provide a more precise ITV, minimizing the error and lost information from 4D-MRI technique and maximally evaluating the DSC and volume error using SS-MRI technique. We used the same repetition number of scans (15-20) as required to generate 4D-MRI, therefore, the scanning period or repetition scan is the same. Our result shows that the repetition number of scans required to generate tumor ITV from MIPSS-MRI is 3–4 times less than that of MIPref (15–20 repetitions), as the same number of repetitions of MIP from 4D-MRI. Therefore, it is feasible to include that the total acquisition time of our proposed method is 3–4 times less than that of 4D-MRI.

In our study, we demonstrated that the number of repeated scans required to generate tumor ITV for slice-stacking method less than that of 4D-MRI. A longer scan time can capture more respiratory variability and make the 4D motion envelop more robust. Under a same acquisition time, our proposed technique can provide a more precise ITV compared to that of 4D-MRI since we would include every scan to generate MIP. Our results showed that this method could be implemented to liver tumor with diameter not smaller than 10 mm. In addition, our proposed method is not limited to different imaging protocols. In our study, we demonstrated the application on HASTE 2D axial MR images. This method can also be applied to other 2D or 3D MR sequences and different slice orientation.

There are several limitations in our study. First, we did not directly compare the ITV generated form slice-stacking method to the ITV from 4D-MRI, thus lacking an intuitive comparison between slice stacking technique and 4D-MRI retrospective method. In our study, we selected MIP generated from all scanning images MIPref as a gold standard to investigate the feasibility of slice stacking since the MIPref includes complete motion information, which might be missing after 4D-MRI retrospective reconstruction. Second, for slice-stacking technique, DSC and relative ITV volume difference depends on the tumor size and patents’ breathing pattern. If the tumor size is small, it is expected that the DSC would be smaller and relative volume difference would be larger, when using 5 repeated scanning volumes to reconstruct MIP. More outlier points were seen for the small tumor, which indicates that this technique might not be valid for small tumor or more repetition number of scans might be needed to generate ITV for small tumor. In addition, more tumor size simulation should be conducted to investigate the relationship between DSC and tumor size, and between relative volume difference and tumor size. In our simulation study with irregular breathing motion, more outlier points were found compared to regular breathing motion. It indicates that a more normal breathing motion would have a better construction of ITV. Third, a quantification of irregular breathing motion magnitude was not included. In irregular motion simulation study, we processed patients’ breathing motion and excluded the extremely abnormal motion based on a threshold. However, we did not quantify the threshold and investigate the difference if using these abnormal breathing motion. To address this limitation, for patients with an abnormal breathing motion, a breath gating technique might be used to exclude the scanning images with abnormal breathing magnitude. Finally, for patient studies, the ITV contouring in ITK-SNAP varies based on the physicians and image quality, and the number of cases is limited. More patient studies should be included in future study.

Ethical Statement: The study was approved by institutional ethics board of Duke University Medical Center and informed consent was taken from all the patients.