Hypertrophic cardiomyopathy, the most common monogenic cardiovascular disorder, is characterized by asymmetric septal hypertrophy and variable phenotypic components (1). Myocardial bridging (MB) occurs when the myocardium overlies a segment of the coronary artery that normally has an epicardial course (2). In this situation, the coronary artery running within the MB is referred to as an intramural coronary artery (ICA). Previous studies have revealed inconsistent but relatively high frequencies of MB in hypertrophic cardiomyopathy, ranging from 40–58% in children and 11–30% in adults, as identified by coronary angiography (3-7). Moreover, the reported rates of MB among hypertrophic cardiomyopathy cases are even higher when detected by coronary computed tomography (CT) and autopsy series, with MB observed in 37 cases of 91 patients in the study by Shariat and colleagues and in 47 cases of 115 patients in the study by Basso and colleagues, respectively (8,9). However, all the previous studies have been either retrospective or of small sample size. As the prevalence of MB in hypertrophic cardiomyopathy varies widely depending on the imaging modality used, it has yet to be fully established. Therefore, this study aimed to investigate the prevalence and morphologic characteristics of ICA using both coronary CT angiography and invasive coronary angiography and to examine correlations of indices measured by these two imaging modalities in a prospective cohort of consecutive patients with hypertrophic obstructive cardiomyopathy (HOCM).

Patients with a diagnosis of HOCM who were admitted for selective myectomy in the Department of Cardiovascular Surgery at Fuwai Hospital between September 2015 and June 2019, were prospectively enrolled in our study. According to the current guidelines, a diagnosis of HOCM was made when the thickness of any segment of the left ventricle was ≥15 mm, the patient had no other cardiac or systemic diseases capable of producing a similar magnitude of hypertrophy, and the peak left ventricular outflow tract gradient was ≥30 mmHg (10,11). Both preoperative coronary CT and invasive angiography were scheduled, and the patients’ clinical data were prospectively collected. The study was approved by the Institutional Ethics Committee of Fuwai Hospital and written informed consent was given by all participants.

Coronary CT angiography was performed with a 64-row LightSpeed VCT scanner (GE Healthcare, Milwaukee, WI, USA) as previously described (12). Patients with a heart rate of >70 beats/min (bpm) were orally administered 25–50 mg of metoprolol (Selokeen; AstraZeneca, Zoetermeer, The Netherlands) before scanning. Scanning was performed at 120 kV and 600–1,000 mA, with a detector collimation of 0.625 mm, a gantry rotation time of 0.35 s, and a pitch of 0.16–0.22. Tube current ranged from 200–550 mA and was modulated according to electrocardiogram (ECG) [the tube current was 550 mA for 40–80% of an interbeat (RR) interval where diagnostic image quality was required and 200 mA during the other phase of the RR interval]. According to the patients’ weight and time to aortic peak enhancement, an appropriate volume of contrast media was injected into an antecubital vein at a rate of 5 ml/s through a 20-gauge trocar using a dual-head power injector (Stellant, Medrad, Pittsburgh, PA, USA). Image reconstruction was routinely performed at 75% of the RR interval. If motion artifacts were apparent, the image was additionally reconstructed at 40%, 50%, 60%, 70%, and 80% of the RR interval, and then the best quality reconstructed images quality were chosen. Thereafter, images were transferred to a standalone workstation (Deep Blue, ADW4.3, GE Healthcare, Milwaukee, WI, USA) and evaluated by an experienced radiologist using dedicated software (Vitrea FX 1.0, Vital Images, Minnetonka, Minnesota).

Axial and cross-sectional views, as well as multiplanar reformation images, were used to evaluate ICA (13-15). A diagnosis of ICA was made when a segment of the coronary artery was either covered by the myocardium, or located within the interventricular groove and in direct contact with myocardium but not fully encased by a visible layer of myocardium or fibrous-fatty tissue (Figure 1). Thus, the ICA was classified as complete encasement with myocardium or partial encasement with myocardium correspondingly. The former was further classified as follows: superficial pattern: an overlying myocardial layer of <2 mm; deep pattern: an overlying myocardial layer of between ≥2 mm and <5 mm; and very deep pattern: an overlying myocardial layer of ≥5 mm. For each tunneled segment of the ICA, the anatomical parameters measured were as follows: (I) involved location and segment of the intramural course; (II) the length, depth (maximal thickness of the myocardial layer from the epicardial surface), and diameter of the intramural segment; and (III) the diameter of the coronary artery at the intramural entry. The ICA was further classified as extensive if the length of the intramural course was ≥25 mm.

Invasive coronary angiography was performed using standard techniques, with at least two different views for each main coronary artery through a femoral or radial approach. Images were reviewed by an experienced radiologist blinded to the results of coronary CT angiography. Angiographic diagnosis of ICA was made when dynamic compression of an epicardial coronary artery was present. For each ICA, the following parameters were measured: (I) the degree and total length of the dynamic compression during systole; and (II) the diameter of the compressed coronary artery at both systole and diastole. Dynamic luminal reductions were defined as follows: <50% (mild); ≥50% and <70% (moderate); ≥70% and <90% (severe); and ≥90% (extremely severe).

Categorical variables are presented as frequency and percentage, and were compared using the chi-squared (χ2) or Fisher’s exact test. Continuous variables are presented as mean ± standard deviation or median, and were compared using the two-sample t-test where appropriate. Pearson’s correlation analysis was used to examine the relationships between continuous variables. Statistical significance was set as a two-tailed P value of ≤0.05. All statistical analyses were performed using SPSS version 22.0 (SPSS Inc., IBM Company, Chicago, IL, USA).

Patient characteristics and prevalence of MB in HOCM 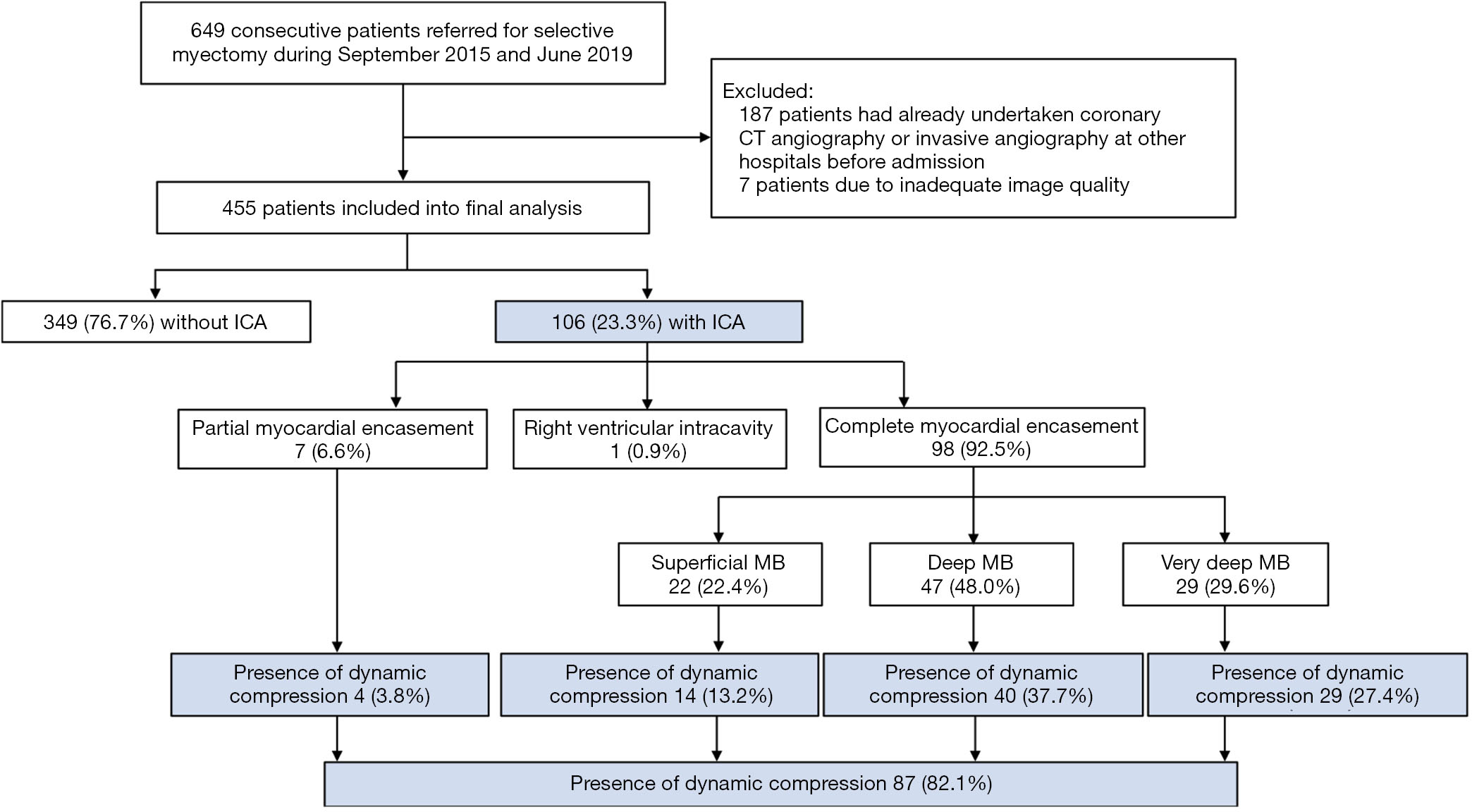 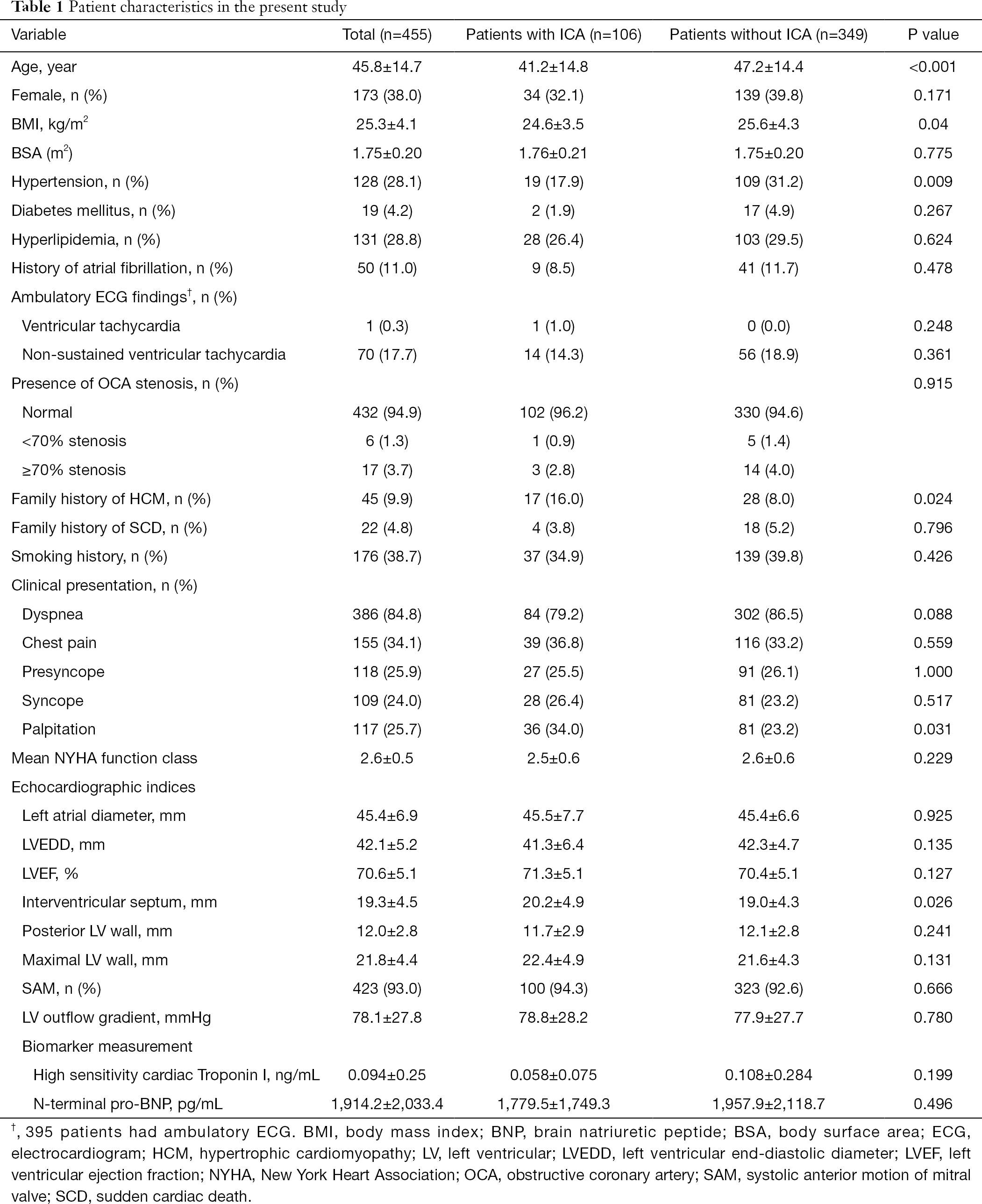 Anatomic characteristics of MB in HOCM

Detailed characteristics of ICA and MB detected by coronary CT and invasive angiography are presented in Table 2. 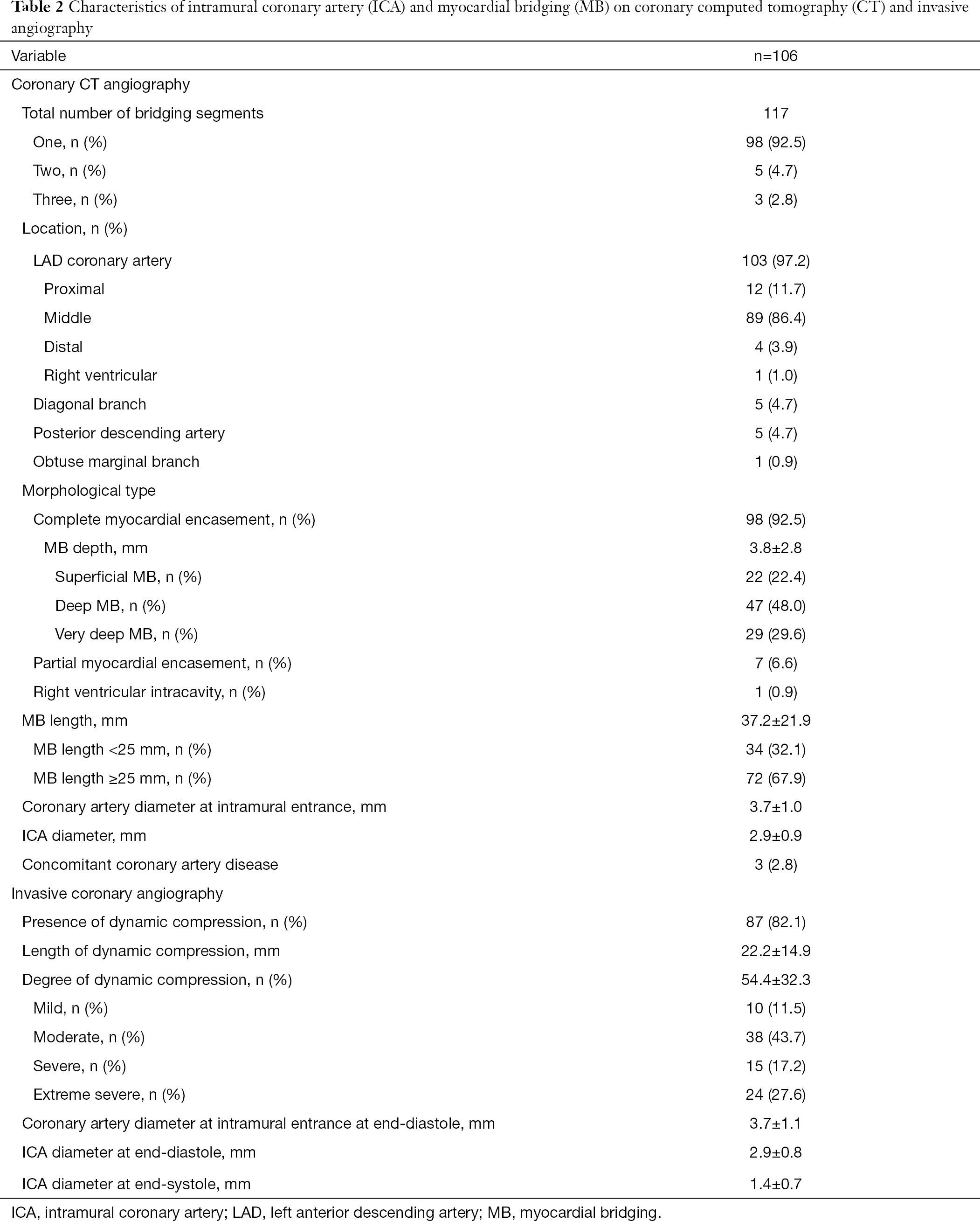 A total of 117 intramural segments were found in 106 patients with ICA. Multiple intramural segments were observed in 3 patients (2.8%). The most frequently involved segment was the middle of the left anterior descending coronary artery, which was observed in 89 patients (86.4%). Notably, 1 patient (1.0%) had an ICA that penetrated the right ventricular intracavity (Figure 1D). No ICAs were found in the right coronary arteries of the patients. 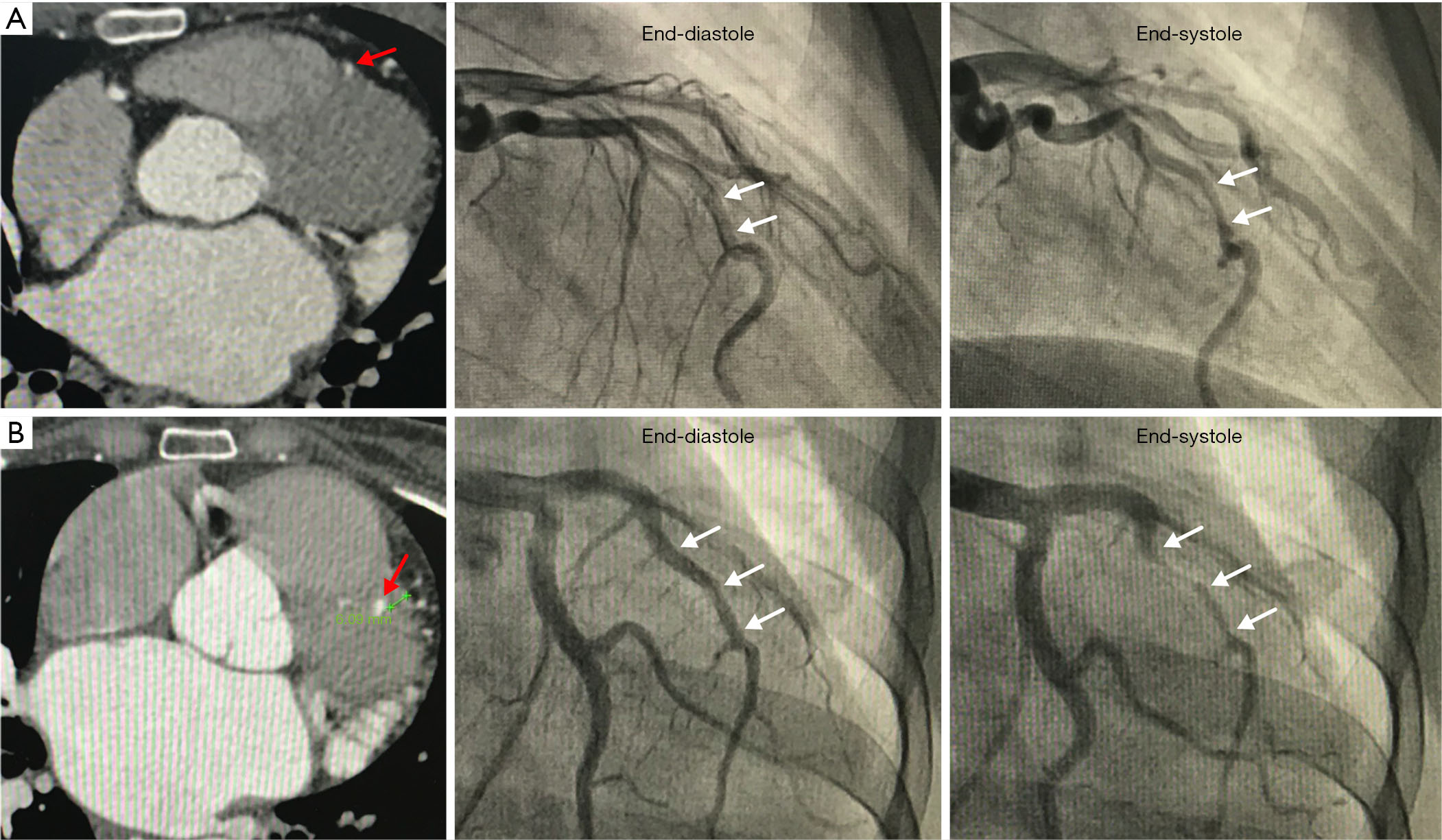 Compared to patients without ICA, patients with ICA had a thicker interventricular septum (20.2±4.9 vs. 19.0±4.3 mm, P=0.026) overall (Table 1). However, after propensity scoring matching for age, body mass index, presence of hypertension, and family history of HCM, interventricular septal thickness was similar between the two groups (Table S2). Neither left ventricular (LV) outflow gradient nor documented non-sustained ventricular tachycardia on ambulatory ECG was associated with the presence of ICA. 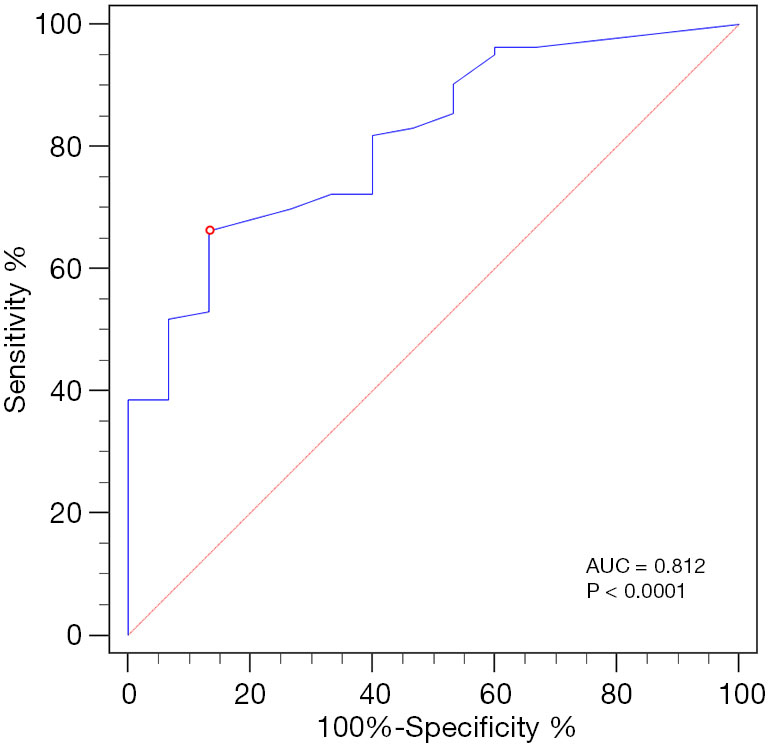 The present study was the first prospective cohort study to investigate the prevalence and morphologic characteristics of ICA using coronary CT and invasive angiography in patients with HOCM. We firstly found that the prevalence of ICA detected in the present study was 23.3% with coronary CT angiography, whereas the rate of coronary dynamic compression detected by invasive coronary angiography was 19.1%. Second, most of the ICAs (98/106, 92.5%) were encircled by a complete layer of MB. Deep or extensive MB was common in patients with HOCM. Third, most patients with ICA (87/106, 82.1%) had a dynamic luminal reduction of ≥50%. Fourth, the depth and length of the ICA were related to the degree and length of dynamic compression. Lastly, MB was not related to interventricular septal thickness after adjustment.

Both ICA or MB are relatively common findings with the increasing use of coronary CT angiography, especially in patients with chest pain (13,16). Previous studies have indicated that MB was more common in cardiac diseases that are associated with left ventricular hypertrophy, such as aortic stenosis or HCM (3,17). However, studies investigating MB in patients with hypertrophic cardiomyopathy are lacking. Related studies have been limited to small series in the earlier time or retrospective case series of conventional angiography and autopsy (3,6,8,18). The prevalence of ICA detected by coronary CT angiography in the present study was 23.3% among patients with HOCM, which is close to the prevalence of 22% reported in a recent study of coronary CT evaluating patients with a low-to-intermediate pre-test probability and without obstructive coronary artery disease (16). Therefore, the prevalence of ICA among patients with HOCM may be similar to that in the general population rather than higher, as previously suggested. In our study, coronary dynamic compression was detected in 19.1% of the study population, which is lower than the rate of ICA detected using coronary CT angiography in previous reports (17,19).

Apart from differences in the imaging modalities used, variable definitions of MB or ICA have also contributed to variability in the reported rates of previous studies. From our point of view, although MB and ICA actually depict the same phenomenon of coronary artery variation, they are not completely equivalent in different reports. The definition of MB only includes ICA with complete myocardial encasement; thus, an underestimated prevalence is expected. In accordance with our observations and those of previous reports, a minority of ICAs with partial myocardial encasement could also produce dynamic compression of involved vessel segments, which have usually been overlooked (13-15). Hence, the term “ICA” may be more appropriate to cover this phenomenon concerning a congenital coronary artery variant.

Invasive coronary angiography identifies ICA indirectly by detecting the presence of milking effect, which belongs to function evaluation (17). Nevertheless, MB and ICA convey an anatomic conception. Not all instances of MB or ICA involve the capability of vessel compression. Therefore, it seems reasonable that the detection rates of MB by invasive coronary angiography usually rank last (17,19). In line with our observations, deep or extensive MB is more likely to produce dynamic compression.

Correlations of findings on coronary CT and invasive angiography

Although the impacts of ICA and MB on the clinical prognosis of HCM in previous studies have been inconsistent, the identification of an ICA or MB may be helpful for myectomy surgeons (6,8,18). Coronary CT suitably visualizes the location and intramural course of an ICA within the interventricular septum, which may help the surgeon to avoid injuring the coronary artery when performing septal myectomy. As surgical unroofing of MB has been proven safe, preoperative acquaintance with MB may help the surgeon with individualized surgical planning for relevant HOCM patients (20).

The present study has some limitations. First, due to the study having been conducted in a dedicated hypertrophic cardiomyopathy center with prospectively included HOCM patients referred for selective myectomy surgery, the prevalence of ICA may have been higher than in the general HCM population. Thus, we recommend that our findings be interpreted with caution. Second, this was a descriptive study aiming to comprehensively depict the morphologic characteristics of ICA and MB on coronary CT and conventional invasive angiography, and to compare the related indices measured by these two imaging modalities and identify their correlations. Third, as patients were admitted to our department for scheduled surgery, prognosis analysis regarding the natural clinical course according to the presence of an ICA was not applicable. Therefore, further prospective research is warranted to refine the impacts of different types of ICA on the prognosis of patients with HOCM.

In conclusion, ICA is common in patients with HOCM and can be visualized well by coronary CT. Deep or extensive MB is more likely produce dynamic compression. Preoperative identification of this congenital coronary artery variant may be helpful for surgical planning.

Conflicts of Interest: All authors have completed the ICMJE uniform disclosure form (available at http://dx.doi.org/10.21037/qims-20-362). SW reports grants from National Natural Science Foundation of China, grants from Beijing Science and Technology Program of China, during the conduct of the study. The other authors have no conflicts of interest to declare.

Ethical Statement: The hospital ethics committee approved this study, and written informed consent was obtained from each participant (or their guardian).