Juvenile parkinsonism is a rare and heterogenous syndrome. In most cases, mutations in Parkinson’s disease (PD)-related genes, especially Parkin, PTEN-induced kinase 1 (PINK1), and DJ1 should initially be suspected. However, many other genetic disorders also need to be considered in differential diagnosis. Here, we report the case of a juvenile patient who presented with parkinsonism but was diagnosed with Huntington’s disease (HD) based on genetic testing. A dual-tracer positron emission tomography (PET) study was subsequently carried out. In accordance with the Declaration of Helsinki, informed consent was obtained from the patient. This report was approved by the Human Studies Institutional Review Board, Huashan Hospital, Fudan University.

The 16-year-old male patient was the only child of non-consanguineous Han Chinese parents. The patient presented with a 6-year history of depression and memory impairment, and a 2-year history of parkinsonism manifesting as unsymmetrical bradykinesia and rigidity, which was prominent in the left side. Mild dystonia was observed in the patient’s left foot while walking. No chorea, tics, instability while walking, seizures, or irritability were observed.

The patient performed poorly on both the Wechsler Adult Intelligence Scale (WAIS-RC) and the Wechsler Memory Scale (WMS-RC), with below average scores. Electroencephalography revealed nonspecific abnormalities in background activity.

The patient had a paternal history of the condition. However, rather than features of parkinsonism, both the proband’s father and uncle started to experience involuntary movements at about 30 years old. Moreover, while the patient’s uncle is still alive and has reached the age of 50 years, his father died at 42 years of age. The proband’s grandfather, who died around the age of 60 years, also presented with involuntary movements; however, in his case, the age of onset could not be determined from the history.

Both magnetic resonance imaging (MRI) and PET scanning were applied due to the parkinsonism phenotype of the patient. PET imaging and image processing were performed using previously reported methods (1), in which the network expression in fluorodeoxyglucose F 18 (18F-FDG) PET scanning was represented with a transformed Z score by using the subject scores of healthy controls in a Chinese cohort.

Volume loss and hyperintense signals of the bilateral basal nuclei on T2 were observed in the MRI (Figure 1A). 18F-dihydrotetrabenazine (DTBZ) PET scanning showed symmetrical vesicular-monoamine-transporter-type 2 (VMAT2) binding reductions in the bilateral striatum (Figure 1B), and the posterior putamen was the most affected structure, followed by the anterior putamen and the caudate. This was a feature shared by PD and HD on VMAT2 PET (2,3). While increased striatal metabolism is one of the core characteristics found in the metabolic brain network of PD patients (4), in the case of our patient, the processed 18F-FDG PET images showed obvious hypometabolism of the bilateral caudate and putamen (Figure 1C), which distinguished the patient’s condition from PD. Although no obvious decrease in cortical metabolism was found, the pattern found in network analysis was observed to be closer to that of adult-onset HD (AOHD), which is characterized by marked striatal hypometabolism and relative decreases in the metabolism of the temporal cortex (5). 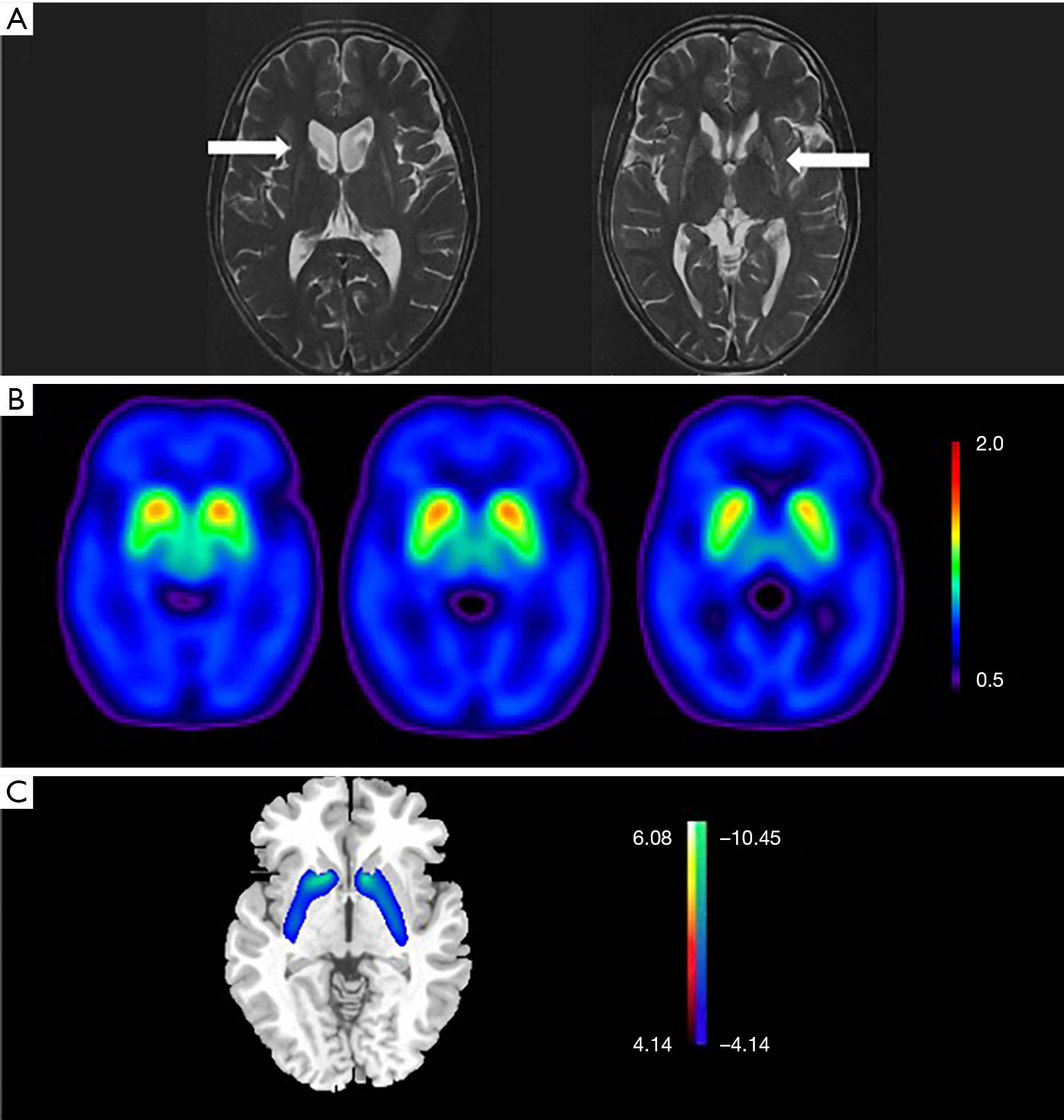 The patient was considered as juvenile hypokinetic-rigid HD according to his medical history and was further confirmed by genetic testing of 18/68 CAG repeats in Huntingtin (HTT). The patient scored 22 out of 120 in the motor section of the United HD rating scale (UHDRS).

Usually, HD is a midlife-onset disease with a typical cytosine-adenine-guanine (CAG) size range of 40–55 CAG repeats. AOHD patients typically present with choreic movements, neuropsychiatric symptoms, and dementia. However, a larger CAG size (>60 CAG repeats) is associated with juvenile-onset HD (JOHD). The atypical age at onset is accompanied with multiple atypical clinical features, including gait impairment, oral-motor dysfunction, seizures, and development delay. Moreover, instead of chorea, dystonia and parkinsonism are the predominant neurological motor symptoms at onset in almost all JOHD patients. Thus, in many cases, juvenile hypokinetic-rigid HD mimics juvenile onset PD and genetic testing is helpful in differential diagnosis. Further, MRI and PET scans, especially 18F-FDG PET, are also of great value in the diagnosis of JOHD. The major difference between JOHD and PD in molecular imaging lies in the metabolism of the striatum; hypometabolism is present in JOHD, while PD involves hypermetabolism.

PET scans have long been used to evaluate patients with JOHD; however, to our knowledge, this case is the first dual-tracer PET study of JOHD to be reported. Although our patient’s patterns on 18F-DTBZ and 18F-FDG PET scans were found to be closer to that of AOHD, the difference in glucose brain metabolism between JOHD and AOHD assisted with differential diagnosis. While decreased metabolism of the temporal cortex is a typical feature of AOHD, it is not observed in JOHD. In fact, recent MRI and postmortem studies (6,7) in JOHD have reported a selective and severe loss of volume in the striatum with preserved cerebral cortex volume. In contrast to AOHD, JOHD exhibits a unique lack of cortical involvement, which was supported by the almost normal metabolism of the cortex in our patient.

In conclusion, although HD patients with differing clinical profiles may share a common pathway, independent of the CAG repeat length, other pathways may explain the marked heterogeneity in the phenotype of HD. In the future, cohort studies focusing on molecular imaging should be carried out to further distinguish between JOHD and AOHD, as well as to provide evidence for the neurobiological basis of different clinical presentations.

Conflicts of Interest: All authors have completed the ICMJE uniform disclosure form (available at http://dx.doi.org/10.21037/qims-19-992). The authors have no conflicts of interest to declare.

Ethical Statement: This paper has not been submitted for publication in any other journal. The study was approved by the Human Studies Institutional Review Board, Huashan Hospital, Fudan University. Written informed consent for publication of this study and any accompanying images was obtained from the patient. A copy of the written consent is available for review by the Editor-in-Chief of this journal.