Early diagnosis and effective treatment of prostate cancer (PCa) are essential for prolonging survival time and improving the quality of life of affected patients (1). Transperineal template-guided prostate biopsy (TTPB) is one of the most effective procedures for the detection of prostate cancer (2,3). However, the biopsy may cause more pain than that caused by transrectal puncture (4). Approximately 20% of patients have rejected prostate biopsy without anesthesia (5). Therefore, adequate anesthesia is a prerequisite of performing prostate puncture (6).

Currently, periprostatic nerve block (PNB) is safe, easily performed, and highly effective, and it is widely considered the preferred method for minimizing insertion pain from the biopsy needle in the prostatic tissue (7,8). Accurately locating the neurovascular bundle (NVB) is the crucial step of PNB. The current method of locating the NVB is to locate the prostate-bladder-seminal vesicle angle (9,10). However, unlike other solid tumors, the growth of the PCa is irregular (11); the position of the angle easily changes, leading to location difficulty and reduced anesthetic efficacy. Also, the distribution of the NVB in some patients is mutated (12,13). Recently, studies have shown that multiparametric magnetic resonance imaging (mpMRI) has a high value in the localization of NVB (14,15). Therefore, this study combined mpMRI and transrectal ultrasound (TRUS) to locate the NVB for performing targeted PNB accurately, and made comparisons with traditional PNB to evaluate whether targeted PNB offers better anesthetic efficacy.

The Epi Info™ 7 (WHO, Geneva, Switzerland) program was used to calculate the sample size. The limits were set as 95% CI, 5% α error, 80% power, and 90% population. It was estimated that ≥36 men would be needed for each of the two groups. And according to the predicted 20%, clinical missed follow-up rate, ≥44 patients in each group were required.

Before the prostate biopsy, a complete blood count with differentiation, coagulation test, and a comprehensive metabolic panel was routinely performed. The patients were given oral intestinal clearance drugs one day before the operation and emptied their bowels on the morning of the operation.

All biopsies were conducted with a mpMRI/TRUS biopsy system (MIM Symphony, MIM Software, Cleveland, OH, USA), providing a real-time fusion of TRUS and mpMRI images to guide the biopsy needle using a transperineal approach. Firstly, the original data from the mpMRI in digital imaging and communications in medicine (DICOM) format were introduced into the image fusion system. Then, we marked the suspicious areas on the T2WI (Figure 1A); the NVB was also marked on T2WI in the intervention group (Figure 1A). Second, the virtual probe was placed in the rectum (approximately 3 mm from the posterior wall of the prostate). Next, the angle of the probe was adjusted until the base plane was aligned with the underlying prostate, and the virtual grid was adjusted to ensure that the prostate was in a suitable place. Finally, a biplanar TRUS probe (Flex Focus 1202 rectal ultrasound, BK, Naerum, Denmark) was inserted into the patient’s rectum. The prostate base was used as the fiducial landmark for registering the MRI and ultrasound images. The reconstructed MRI axial images were synchronously displayed adjacent to the TRUS axial image on the same monitor (Figure 1B). Morphological MRI data, including the suspicious areas, were superimposed on the TRUS images in real-time to guide the PNB and the biopsy needle. 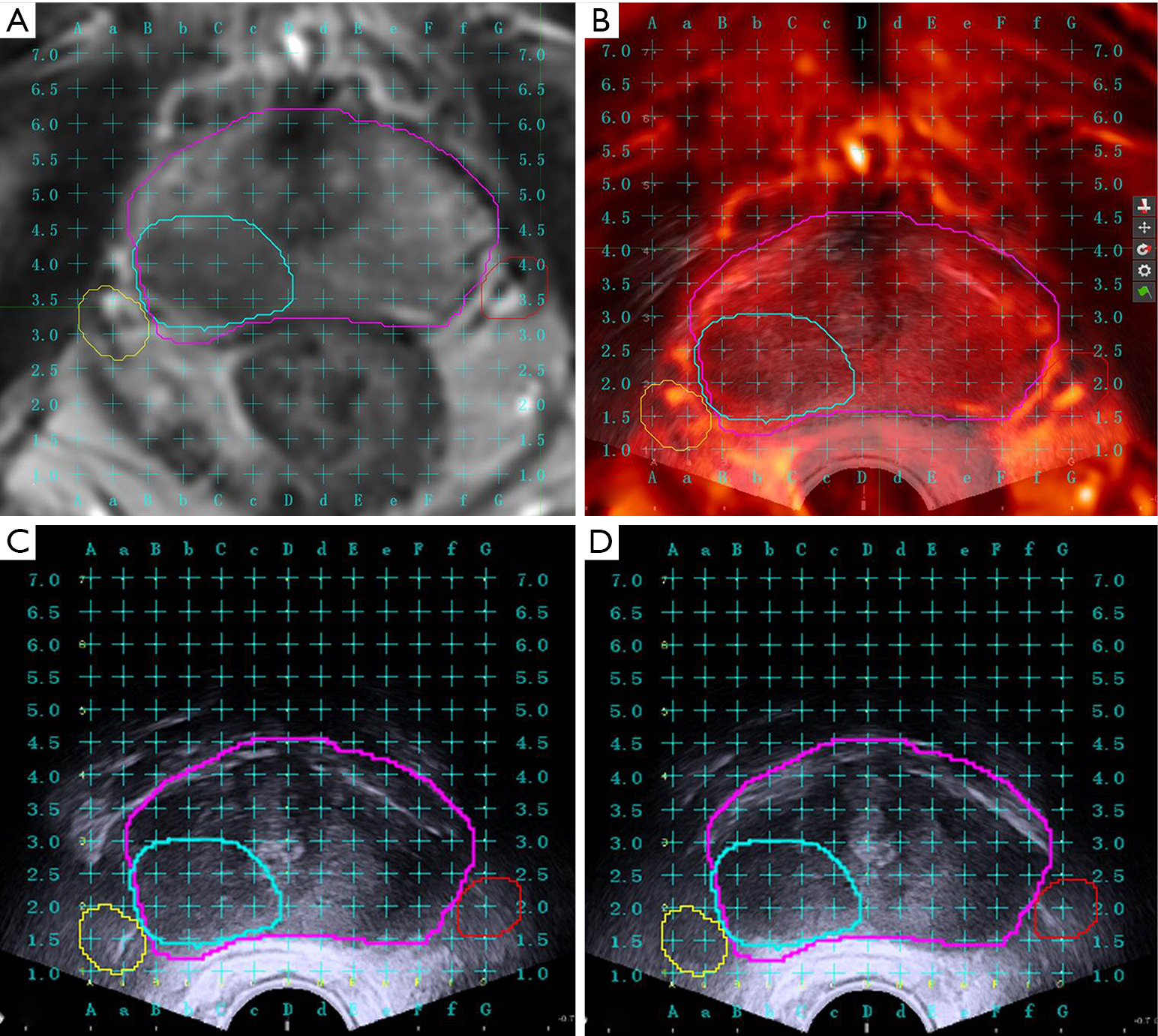 Figure 1 mpMRI/TRUS image fusion. (A) Multiple sequences of mpMRI, the regions of interest are delineated on T2WI. The prostate target is contoured in purple. The suspected area of prostate cancer target is contoured in blue. The bilateral NVB target is contoured in yellow and red, respectively. (B) The reconstructed MRI axial images are synchronously displayed adjacent to the TRUS axial image on the same monitor. With the brightness of MRI image adjusted, the MRI image with a red background can be seen behind the TRUS image, and the goodness of fit between the MRI and the TRUS image could be observed and adjusted. (C,D)Targeted PNB was performed under the guidance of the mpMRI/TRUS image fusion. Infiltrative anesthesia for NVB in yellow and red contours was performed, respectively. The bright white spots inside yellow (C) and red (D) contours were the needlepoint of the ANSll 0.5 mm × 112 mm spinal needle.

A visual analog scale (VAS; 0, none; 10, intolerable pain) was used to evaluate pain, and a visual numeric scale (VNS; 0, terrible; 4, perfect) was used to quantify their satisfaction; only whole numbers were accepted for both scale ratings (18,19). An independent resident and the participants were blinded to the anesthesia method. The independent resident explained the VAS and VNS to the patients and requested them to rate their level of pain and satisfaction, respectively. The VAS and VNS were rated at two intervals. VAS-1 and VNS-1 were determined during the biopsy procedure, and VAS-2 and VNS-2 were determined 30 min after the procedure. The patients recorded the VAS and VNS scores without any other assistance.

Patients were given a nonvalidated, self-administered questionnaire about complications, such as hematuria, urinary retention, infection, hemospermia, and vasovagal reaction.

Statistical software SPSS (version 19.0; IBM Corp, Armonk, NY, USA) was used for data processing. Quantitative statistics were described using mean ± SD, and grade data were displayed as a median (interquartile range), whereas enumeration data were expressed as percentages. The Mann-Whitney U test was used for pain and satisfaction score comparisons. The chi-squared (χ2) test was used to compare the rates of complications. A two-tailed P<0.05 indicated statistical significance.

Figure 2 The flow diagram of the study according to the Consolidated Standards of Reporting Trials (CONSORT) guidelines.

The TTPB method has become one of the most commonly used for the diagnosis of PCa. As an invasive procedure, it is associated with signiﬁcant pain and discomfort. Currently, PNB is considered the ‘gold standard’ for pain control during prostate biopsy (7,8). It was first reported in 1996 by Nash et al. (20) that PNB decreased pain during TRUS-guided prostate biopsy. Conde Redondo et al. (21) found that bilateral PNB had a better anesthetic efficacy than oral morphine. A meta-analysis of 14 studies conducted by Hergan (22) showed that PNB was better than a placebo or no anesthesia. The most critical step in PNB is to locate the NVB. Currently, the most effective localization method is to find the blood vessels of the NVB by TRUS and locate the prostate nerve plexus with blood vessels, and the location used is the prostate-bladder-seminal vesicle angle (23). Therefore, irregular hyperplasia of the prostate causes this angular position to change, which may affect the efficacy of anesthesia. Also, some studies found that NVB distribution is variable in some patients, and not all the peripheral nerves of the prostate are located at that angle (24). Hence, there is a need for a method that is sensitive enough to accurately position the NVB, to improve the anesthetic efficacy of PNB.

With the advancement of technology, the mpMRI can now scan any plane and provide more accurate measurement tools, with good tissue and high spatial resolution (25). Wei et al. (15) found that MRI was advantageous in identifying the NVB. On the MRI, the prostate peripheral vessel and nerve formed quasi-circular low-signal structures, connected serially in grape-like structures, or fused into an arc structure which was distributed in the pelvic fascia on both sides of the prostate. Furthermore, Kwon et al. (14) found that T2WI was superior to T1WI for locating the NVB. Meanwhile, mpMRI/TRUS fusion navigation technology has become an accurate targeted biopsy method for suspicious lesions because mpMRI/TRUS can display real-time TRUS images and display MRI images of the same ultrasound section concurrently. This fusion significantly improved the positive rate of puncture, hence reducing the number of puncture needles required (26,27). However, currently, spinal or even general are the predominant anesthesia methods used for mpMRI/TRUS fusion-guided prostate biopsy, these methods are time-consuming, laborious, and present increased anesthesia risks (28,29). There have been previous studies that applied PNB to mpMRI/TRUS fusion-guided prostate biopsy (30); however, only the traditional PNB was performed. Hence, our study aimed to achieve increased anesthetic efficacy when mpMRI/TRUS fusion-guided prostate biopsy was performed; targeted PNB was performed with accurate location enabled by fusing the image of NVB displayed on MRI with the TRUS image. Our study revealed that the pain scores in the intervention group were signiﬁcantly lower than in the control group, and that satisfaction scores in the intervention group were significantly higher than in the control group. However, complications, including hematuria, urinary retention, infection, hemospermia, and vasovagal reaction, were not significantly different between the groups. Hence, targeted PNB provided improved anesthesia compared to traditional PNB and did not increase the incidence of complications. Moreover, targeted PNB enabled mpMRI/TRUS fusion-guided biopsy to be performed in the outpatient facility; conversely, lumbar or general anesthesia procedures need to be performed in the operating room.

Our study involved some limitations. In the process of registering MRI and TRUS images, prostate displacement and deformation are easily caused by changes in the patient’s position, ultrasound probe diameter inconsistencies, and the MRI rectal coil; these variables lead to deviations in registration. Additionally, the corresponding TRUS images must be subjectively selected for registration to determine the level following MRI image selection of the marker point, which results in the error of image registration to a certain extent. Moreover, although VAS and VNS scores are relatively objective indicators of pain, assessment is based on patients’ subjective sense of pain and is, therefore, lacking in objective quantitative indicators. Further research is needed to address these limitations.

The images of MRI are high resolution and have a large number of parameters; when combined with the real-time imaging of TRUS, the fusion of the two imaging techniques will improve the localization accuracy of the NVB. Targeted PNB, based on the fusion of MRI and TRUS images, can reduce the pain of puncture without increasing the incidence of complications.

Funding: This work was supported by the Jiangsu Provincial Commission of Health and Family Planning Research Project (no. H201550).

Conflicts of Interest: All authors have completed the ICMJE uniform disclosure form (available at http://dx.doi.org/10.21037/qims-20-369). The authors have no conflicts of interest to declare