Mechanical ventilation is a life saving intervention given to patients requiring airway support in the intensive care unit (ICU). However, this intervention requires an endotracheal tube (ETT), which has been associated with an increased risk of ventilator-associated pneumonia (VAP) (1-5). VAP has been reported to develop within 48 hours post intubation and is associated with a mortality rate between 20% to 50% (6-8). The formation of bacterial biofilms within these ETTs provides a vessel for infectious bacteria to colonize and become resistant to antibiotics. Current standard-of-care suctioning of the ETT is used as a management strategy to reduce airway colonization by pathogenic bacteria, reduce resistance to airflow, and decrease biofilm formation. However, reports have shown that standard-of-care suctioning is not adequate to fully eliminate secretions from the ETT, and additional measures to reduce the formation of ETT biofilms have been proposed in an effort to reduce VAP (9). In this in vivo study, we quantify the volume of secretions and biofilm formed within the ETTs in intubated ICU patients using fiber-optic based three-dimensional (3D) optical coherence tomography (OCT) to determine the effectiveness of standard-of–care suctioning.

This observational study was conducted in a cohort of 4 subjects, irrespective of ethnicity, gender, or race, where a total of 23 suctioning procedures were performed, collectively from the 4 subjects. The subjects included in this study were admitted to the ICU at Carle Foundation Hospital, Urbana, IL, USA, and required intubation with an ETT (HALYARD* MICROCUFF* Adult Endotracheal Tube) and mechanical ventilation for over 24 hours. Prior to participation in the study, informed consent was obtained from the guardian/relative of the subject as per the protocol approved by the Institutional Review Boards of Carle Foundation Hospital and the University of Illinois at Urbana-Champaign. A comprehensive procedure for catheter-based OCT (Model C7XR, St. Jude Medical, Inc.) imaging and data analysis, including relative attenuation coefficient (RAC) analysis for in vivo detection of ETT biofilms in intubated patients, has been described in an earlier study (10). This study focuses on determining the efficacy of ETT suctioning in vivo in intubated patients using the catheter-based OCT technology. While the imaging protocol and data analysis remain the same as described in our earlier study, OCT images in this study were acquired before and after suctioning procedures. Figure 1 shows the schematic and cross-sectional OCT image of an ETT and the position of the catheter during imaging. The OCT catheter was marked to indicate when the tip of the catheter was at the distal end of the ETT, ensuring positioning of the catheter within the ETT lumen and not extending into the trachea. The same marker position was used to determine the orientation of the catheter to ensure the position remained approximately the same for the scan post suctioning.

Briefly, longitudinal OCT imaging was performed in four intubated subjects before and after suctioning procedures (11). While suctioning was performed as needed according to the standard-of-care, OCT imaging was performed with a suctioning procedure approximately every 24-hour until extubation. Four fresh and sterile OCT imaging catheters were used in this study, one for each subject. Each OCT catheter was disinfected between each imaging session, and then re-used in the same subject. No OCT catheter was shared between subjects. Extubated ETTs were collected and subsequently analyzed in the lab with fluorescence microscopy and Gram staining. OCT and attenuation coefficient image analysis results were correlated with microscopy and clinical data to verify the presence of bacteria and/or biofilm. In addition to the OCT-based attenuation coefficient images, we incorporated a secretion density metric to quantify the amount of secretions present before and after the suctioning procedures. The secretion density metric is obtained by converting the OCT image into a binary image, and is defined as:

Statistical analysis of the measurements between the before-suctioning and after-suctioning groups was done using a two-tailed Welch’s t-test. A significance level of P<0.05 was considered statistically significant. Data variables were expressed as mean ± standard deviation.

Acquired OCT images were processed for each subject. Secretion density and RAC metrics were derived from each volume dataset. Figure 2 shows representative reconstructed 3D OCT cylindrical volumes for ETT (Subject 1, Day 10 and Subject 2, Day 5) conditions before and after suctioning. The suctioning procedure showed minimal effect on clearing the secretions. Furthermore, we observed with OCT that the introduction of the suction catheter actually displaced and moved secretions to the distal end of the ETT (Figure 2, red bar). Quantitative analysis of secretion density and RAC for the ETTs from all subjects (row wise) is summarized in Figure 3A. The mean secretion density metric (left column) showed minimal difference in clearing the secretions by suctioning, while the RAC (right column) showed a higher degree of optical attenuation over the intubation time. Figure 3B shows the mean secretion density and mean RAC (N=23) between the before- and after-suctioning groups. After suctioning of the ETT, the mucous will be cleared, leaving behind biofilm, and resulting in an increase in the RAC. The presence of lower-scattering mucous has the effect of reducing/diluting the RAC. Previously reported studies show suctioning is ineffective at clearing formed biofilms (9). The blue line corresponds to the threshold obtained from a previous study using the same OCT system. We had used a bimodal distribution method to separate the signal from the biofilm positive data. 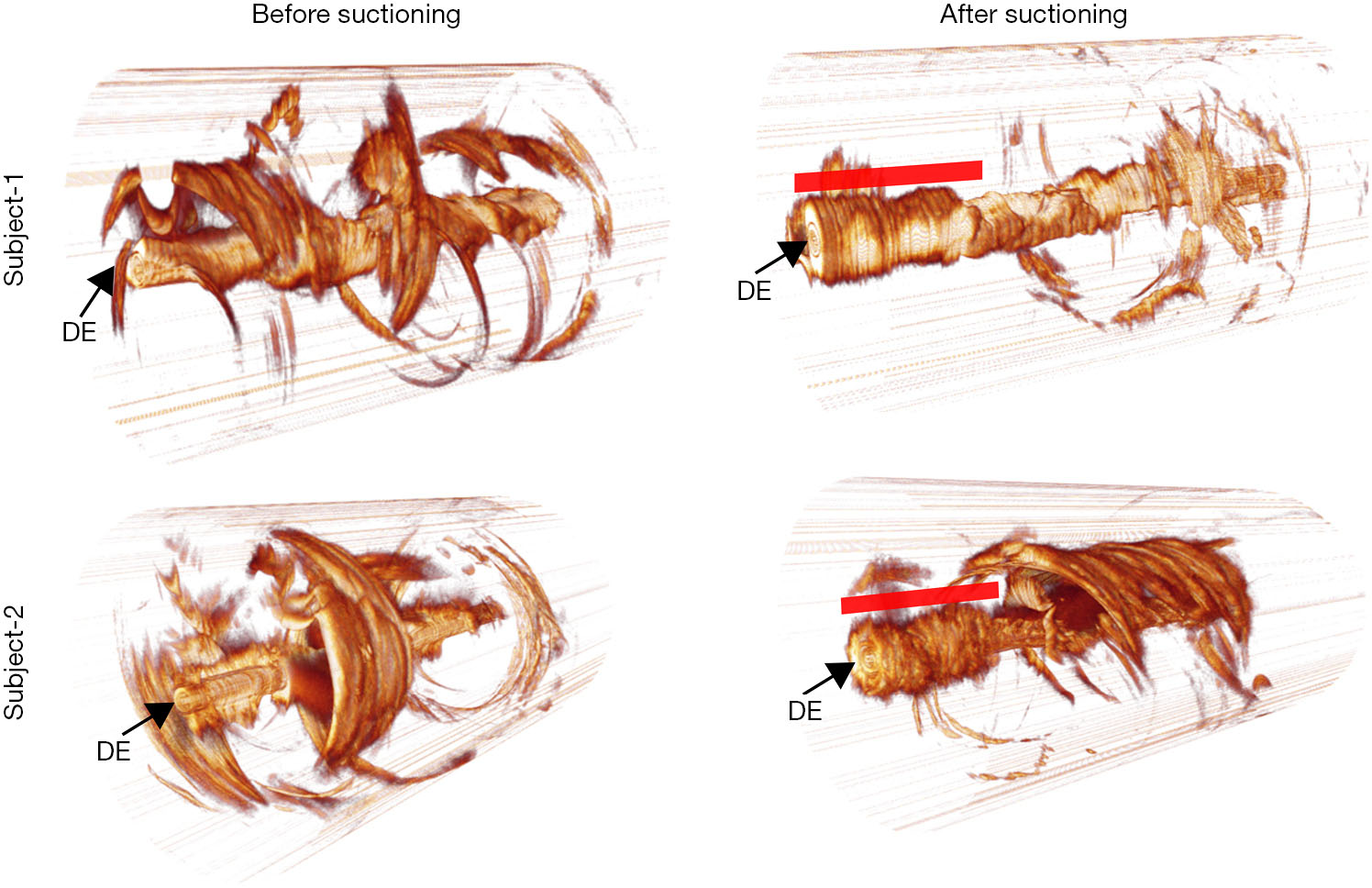 Figure 3 Quantitative analysis of ETTs based on secretion density and RAC metrics. (A) Quantitative analysis of ETTs based on secretion density (left column) and RAC metrics (right column) for all subjects (S1–4) from the day of intubation until extubation. The bar plots in green represent before suctioning and the bar plots in red represent after suctioning. (B) Measured average overall RAC values, secretion density, standard deviations, and statistical analysis presented by group. The blue dashed line in (A) corresponds to the threshold obtained from a bimodal distribution method to separate the signal from biofilm positive data. ETT, endotracheal tube; RAC, relative attenuation coefficient.

To substantiate and validate the presence or absence of biofilm in the ETTs, and correlate with OCT and RAC, extubated ETTs were immersed in a fixative solution, then processed to remove biological material from the inner luminal wall, which was then imaged using conventional microscopy techniques. Material from all extubated ETTs was processed for Gram staining and fluorescence staining for the presence of biofilm. Figure 4 shows representative microscopic images of an ETT (Subject 1) sample staining positive for biofilm. OCT findings and microscopy data were further correlated to clinical reports. Table 1 summarizes the clinical records of each subject from Day 1 of intubation until extubation. The OCT, RAC, and secretion density data from all four subjects were in agreement with the microscopy data and clinical reports. These results demonstrate that the standard-of-care suctioning procedure is largely ineffective at fully clearing secretions or biofilms from within an ETT. 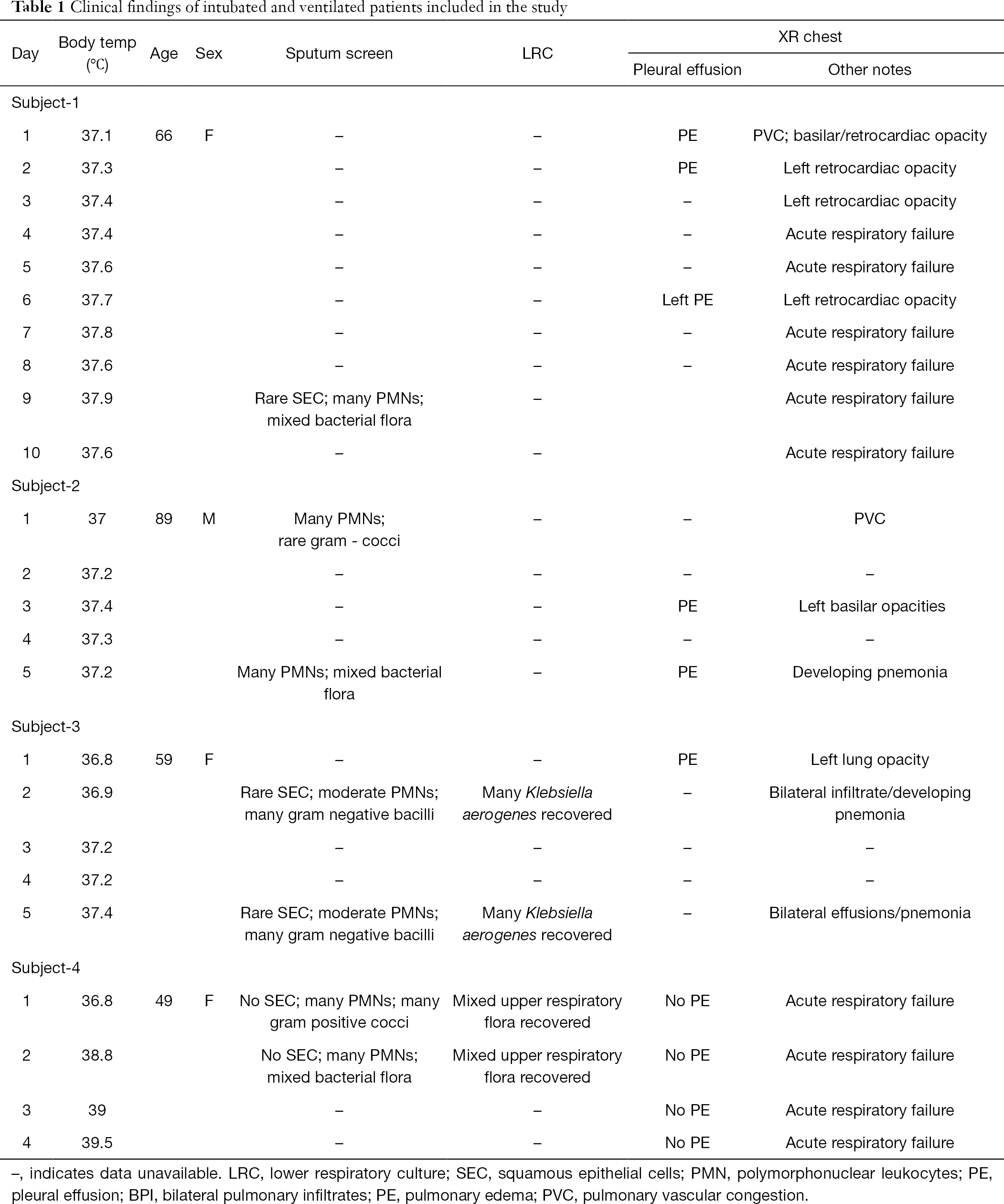 In this study, catheter-based OCT was used to demonstrate that suctioning of ETTs in not completely effective at clearing secretions nor eliminating established biofilms. Furthermore, 3D OCT volumes of ETT biomass showed that insertion of a suction catheter displaces and moves secretions and biomass to the distal end of the ETT, which may increase the chance for depositing this biomass into the trachea. Our technology based on in vivo catheter-based OCT imaging enables new research and clinical investigations into current ETT suctioning procedures, and can be used to evaluate additional strategies to effectively clear secretions and reduce the development of ETT biofilms.

The presence of secretions and associated pathogenic bacteria and biofilms in ETTs has been known to cause VAP (12). Traditionally, ETT suctioning is performed every 1–2 hours to remove secretions and to reduce the risk of pneumonia (13). However, some studies have shown that due to the considerable risks and adverse effects, it is now recommended to suction only when necessary (14). Our study showed that the conventional ETT suctioning procedure does not effectively clear secretions nor reduce the formation of biofilms. Hence, suctioning only when necessary may reduce the risks associated with suctioning, but does not efficiently eliminate the secretions or biofilms. This was also confirmed by an earlier report where a novel suctioning procedure showed improved clearance of secretions compared to the conventional one (9). Nonetheless, catheter-based 3D OCT uniquely enables longitudinal in vivo monitoring of ETT secretion density and biofilms, which may be used in management strategies to help reduce the associated risks of VAP and death.

Despite the noted advantages, the present study has a few limitations. While 23 suctioning procedures were imaged, both before and after, only 4 subjects were involved in this feasibility study. Our method detects the formation and presence of biofilms in the ETT based on an attenuation coefficient image, but does not diagnose pneumonia in a subject. It is evident from the literature that an increased number of intubation days results in an increased risk of the development of biofilms, leading to an increased risk of VAP (15). Due to the limited number of subjects and corresponding suctioning data included in this study, we calculated the significance of the suctioning procedure based on data from all four subjects. We observed from OCT analysis that all four subjects had developed biofilms over their intubation period, which was subsequently confirmed in the microscopy results. However, the clinical assessment reports indicated pleural effusion (Subject 1) or bilateral infiltrate/developing pneumonia (Subjects 2 and 3). This feasibility study did not include a sufficiently large number of subjects to draw meaningful conclusions about the correlation between the presence of biofilm found in the ETT with the clinical findings of the bilateral infiltrate and developing pneumonia. The OCT imaging results for Subject 4 showed an increase in attenuation coefficient, indicating the development of biofilm. However, the clinical reports of this subject do not indicate pleural effusion/respiratory illness/failure. Larger future studies will focus on exploring this correlation based on OCT image data. A future study should include additional subjects, as well as a greater number and multiple types of suctioning procedures.

This study utilized a commercial OCT system with commercial fiber-optic catheter probes. The optical working distance of these catheters was shorter than what would be preferred for full 3D imaging of the luminal wall of a larger diameter adult-sized ETT. New ETT-specific OCT catheters with longer working distances and a centering mechanism to position the OCT catheter directly in the center of the ETT lumen would be preferred in future studies. Furthermore, data presented in this work was processed, displayed, and analyzed offline, requiring approximately 10 minutes per volume. Future studies will resolve this issue by implementing GPU-based processing to analyze and display the 3D cylindrical volumes of data in real-time.

This investigation demonstrated the use of catheter-based 3D OCT for determining the efficacy of ETT suctioning in intubated critical care patients. In vivo catheter-based 3D OCT offers the potential to rapidly and longitudinally determine the efficacy of ETT suctioning in order to effectively compare suctioning and brushing strategies to help reduce the presences of residual biofilm and secretions following suctioning, and to subsequently help reduce the incidence of VAP.

We acknowledge the logistical assistance from the research staff at Carle Foundation Hospital. This work was performed, in part, by utilizing the shared equipment and services of the Microscopy Suite and Visualization Laboratory at the Beckman Institute for Advanced Science and Technology at the University of Illinois at Urbana-Champaign (UIUC-BI-MS, UIUC-BI-VL).

Ethical Statement: The study was approved by the Institutional Review Boards of Carle Foundation Hospital and the University of Illinois at Urbana-Champaign (No.: 16CRU1498), and informed consent was obtained from all the patients who participated in this study. All experiments were performed according to Declaration of Helsinki guidelines and regulations.