Acromegaly is a chronic hormonal disease characterized by chronic overproduction of growth hormone (GH) caused by a benign pituitary tumor (1). Wide range of cardiovascular alterations could be detected in acromegaly including hypertension, left ventricular (LV) hypertrophy and dysfunction, valvular abnormalities and arrhythmias (2,3). Diabetes mellitus (DM) is a strong cardiovascular risk factor known to be able to modify LV function (4). Three-dimensional (3D) speckle-tracking echocardiography (3DSTE) is a new non-invasive imaging technique, which is able to quantify LV deformation including LV strains, which are objective features of LV contractility (5). Moreover, LV is able to wring itself called LV twist, which can be characterized by different LV rotational parameters (6). The present study aimed to assess the relationship between LV deformation and twist in the presence of DM in acromegaly.

Thirty-seven acromegaly patients were involved in the study, but due to insufficient image quality 13 have to be excluded from analysis. Therefore, the present study comprised 24 acromegaly patients, from which 5 had DM. Bromocriptine and long-acting somatostatine analogues were used in 4 and 4 patients, respectively, while hypophysectomy was performed in 6 patients previously in the presence of active acromegaly. In the inactive acromegaly group, 2 and 3 patients were taking bromocriptine and/or long-acting somatostatine analogues, respectively, while 4 patients had previous successful hypophysectomy. Their data was compared to 35 age- and gender matched healthy controls. Diagnosis of DM and acromegaly was based on current guidelines (4,7). The present study is part of the MAGYAR-Path Study (Motion Analysis of the heart and Great vessels bY three-dimensionAl speckle-tRacking echocardiography in Pathological cases), which was organised to assess diagnostic and prognostic value of different 3DSTE-derived parameters (‘magyar’ means ‘Hungarian’ in Hungarian language). The study conformed to the provisions of the Declaration of Helsinki (as revised in 2013). The study was approved by institutional ethics committee of the University of Szeged (No.: 71/2011) and informed consent was taken from all the patients.

Classic cardiovascular risk factors, activity of acromegaly and 2D echocardiographic data in all, diabetic and non-diabetic acromegaly patients and healthy controls are presented in Table 1. Diabetic patients were older and had higher ratio of hypertension as compared to non-diabetic subjects. Higher LA and LV end-diastolic dimensions, thickened LV posterior wall and interventricular septum and diastolic dysfunction could be demonstrated in acromegaly subjects. No differences could be detected in the routine 2D echocardiographic data between diabetic and non-diabetic acromegaly cases. 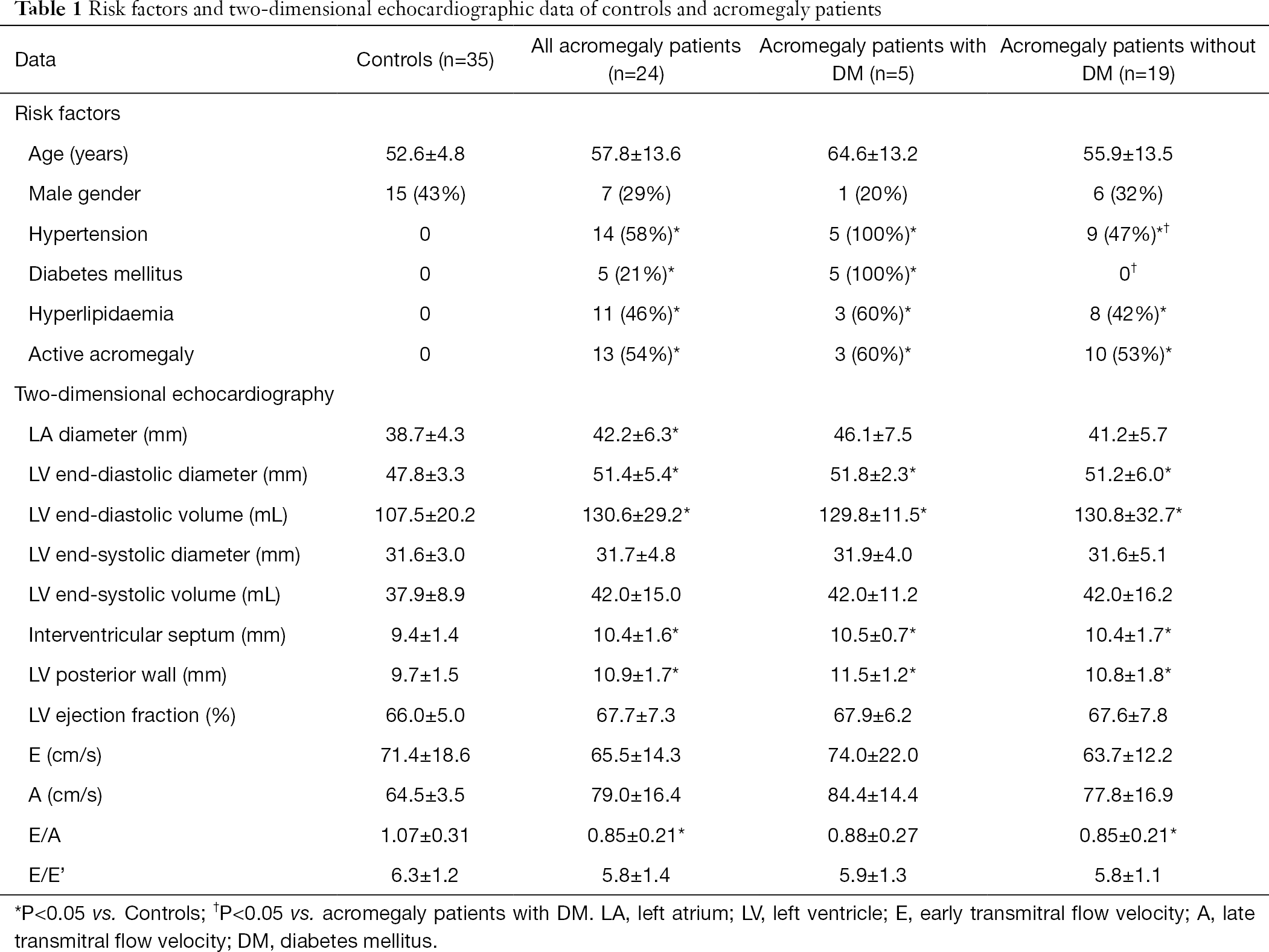 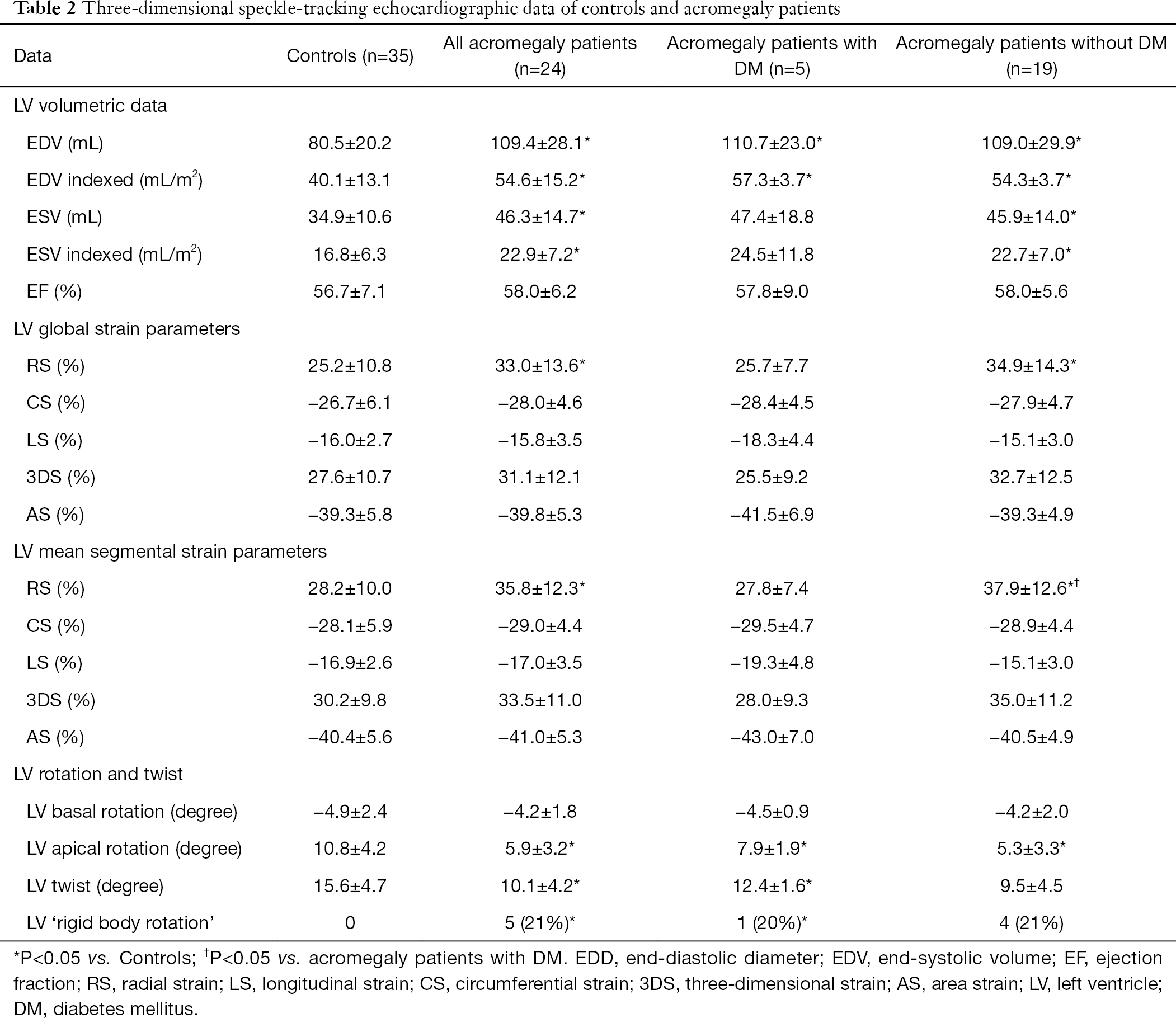 Both acromegaly and DM are known to be associated with severe, but different LV deformation abnormalities including strain and rotational changes (4,9-11). Aortic stiffness is increased in both diseases (12,13), and the presence of DM facilitates aortic stiffening in acromegaly (14). Therefore, a question has been arisen, whether it has any effect on otherwise supranormal LV deformation (strain) in acromegaly (10).

In a recent study, severe abnormalities in LV twisting mechanism could be detected in acromegaly including significant reduction in LV apical rotation and twist (9). Moreover, absence of LV twist called as LV-RBR was found in 20% of acromegaly patients (9,15). These significant abnormalities could be theoretically explained by acromegaly-related hormonal changes and their effect on fiber structure. Although these abnormalities are present, LV systolic (pumping) function is normal in these patients due to compensatory increased LV contractility represented by increased LV-RS, which was found to be related to disease activity (10). These studies confirmed significant deterioration of LV twisting mechanism with a compensatory increased LV contractility, giving us deeper insight into the acromegalic cardiomyopathy. With the finding of the present study, this knowledge was widened demonstrating a relative reduction in LV-RS in acromegaly patients with DM from hypercontractility to the level of LV-RS seen in healthy, non-acromegalic, non-diabetic subjects as compared to non-diabetic cases. Moreover, LV apical rotation was found to be lower in acromegaly patients with tendentiously higher values in diabetic acromegaly patients as compared to that of non-diabetic acromegaly cases suggesting a possible compensatory mechanism. Interestingly, the ratio of LV-RBR did not differ between diabetic and non-diabetic acromegaly patients suggesting no effects of DM on the development of LV-RBR. All diabetic patients had hypertension as well, which could affect results. However, further studies with more acromegaly patients are warranted to confirm our findings with other methods. Finally, it can be concluded that DM deteriorates LV deformation in acromegaly.

Conflicts of Interest: All authors have completed the ICMJE uniform disclosure form (available at http://dx.doi.org/10.21037/qims-20-159). AN serves as an unpaid editorial board member of Quantitative Imaging in Medicine and Surgery. The other authors have no conflicts of interest to declare.

Ethical Statement: The authors assert that all procedures contributing to this work comply with the ethical standards of the relevant national guidelines on human experimentation and with the Helsinki Declaration of 1975, as revised in 2013, and has been approved by the institutional committee of the University of Szeged. The study was approved by institutional ethics committee of the University of Szeged (No.: 71/2011) and informed consent was taken from all the patients. Written informed consent was obtained from the patient for publication of this study and any accompanying images. A copy of the written consent is available for review by the Editor-in-Chief of this journal.