Silicone gel breast implants produced by the French company Poly Implant Prothèse (PIP) containing hydroxypropyl cellulose, also known as M-Implants and Rofil-implants, have been introduced worldwide, since 1991 and approximately 400,000 women may have PIP silicone implants (1). The company went into liquidation in 2010, after the French Medical Device Regulatory Agency (AFSSAPS) revealed that had been using industrial grade silicone, rather than the purer medical grade silicone filler, originally tested for the award of the European commission mark of approval (2).

On December 2011, the French government recommended that 30,000 French women who had PIP breasts implants, should have removed them, due to the high rupture rates. Similarly, in the UK, the Medicines and healthcare products regulatory agency (MHRA) issued a device alert advising clinicians not to use PIP implants; in addition, they stated that the rupture rates was in the order of 1% compared to the rate of 5%, suggested by the French regulator. Furthermore, fears about the increased rupture rates of these implants and risks of toxicity have subsequently led to increased patient anxiety.

To date, few clinical trials in the English literature, have confirmed a higher incidence of rupture of PIP hydrogel implants, compared to other breast implants (3-7).

Contrast enhanced magnetic resonance imaging (MRI) is an established diagnostic tool in the evaluation of the extent of disease in patients with known breast cancer, in monitoring the response to neo-adjuvant therapy and screening of patients at high risk for breast carcinoma (8-11). Among the most important clinical application of breast MRI, there is the assessment of patients after breast augmentation therapy (12-14).

The purpose of this retrospective study was to describe the MRI features of PIP hydrogel implants in a group of 64 patients and to assess the incidence of implants rupture, compared to other clinical trials.

In this double-center study, we retrospectively reviewed the data sets of 64 consecutive patients (mean age, 43±9 years; age range, 27-65 years), who underwent breast MRI examinations, between January 2008 and October 2013. History from each patient included: age of implant; any symptoms and history of previous implants other than PIP prosthesis.

The most common clinical indication to breast MRI, was re-evaluation of patients with suspected implant rupture on the basis of clinical assessment or after conventional imaging examination (either mammography or ultrasound). All patients had undergone breast operation with bilateral textured cohesive gel PIP implant insertion for aesthetic reasons. The mean time after operation was 8 years (range, 6-14 years). One patient had undergone breast augmentation in Colombia in 2004. The implantation time in this case was 9 years. No patients reported history of direct trauma to their implants.

All MR images were retrospectively reviewed by two experienced breast imagers with respectively 16 years (M. I.) and 10 years (B. C.) expertise in breast MR imaging and three groups were identified: group 1, patients with normal breast prosthesis or with signs of mild collapse or coarctation and with no evidence of rupture; group 2, patients with clear signs of intra-capsular rupture, with evidence of silicone within the fibrous capsule or with associated signs, such as the linguine sign (including the sub-capsular lines), the keyhole or noose sign and the droplet sign; and group 3, patients with extra-capsular rupture and evidence of free silicone outside the capsule or peri-prosthetic and or axillary or mediastinal cavity collections (silicomas).

In the overall group of patients, in 43 cases there was a sub-glandular breast implant; in the remaining 21 a sub-pectoral prosthesis. At the time of clinical examination, 41 patients were asymptomatic, 16 complained of breast tenderness and 7 had clinical evidence of rupture. Normal findings were observed in 15 patients and in 26 there was evidence of mild collapse, with associated not significant peri-capsular fluid collections and no evidence of implant rupture (Group 1); in 23 patients, there was suggestion of implant rupture, according to breast MRI, leading to an indication for surgery. In particular, 14 patients (Group 2) showed intra-capsular rupture, with associated evidence of the linguine sign in all cases; the key-hole sign and the droplet sign were observed in 6 cases. In 9 patients (Group 3), there was evidence of extra-capsular rupture, with presence of axillary collections (siliconomas) in 7 cases and peri-prosthetic and mediastinal siliconomas, in 5 cases. The overall rupture rate was of 36% (23 out of 64 patients). No cases of breast implants related cancer were observed in our series. Table 1 summarizes results in patients populations. 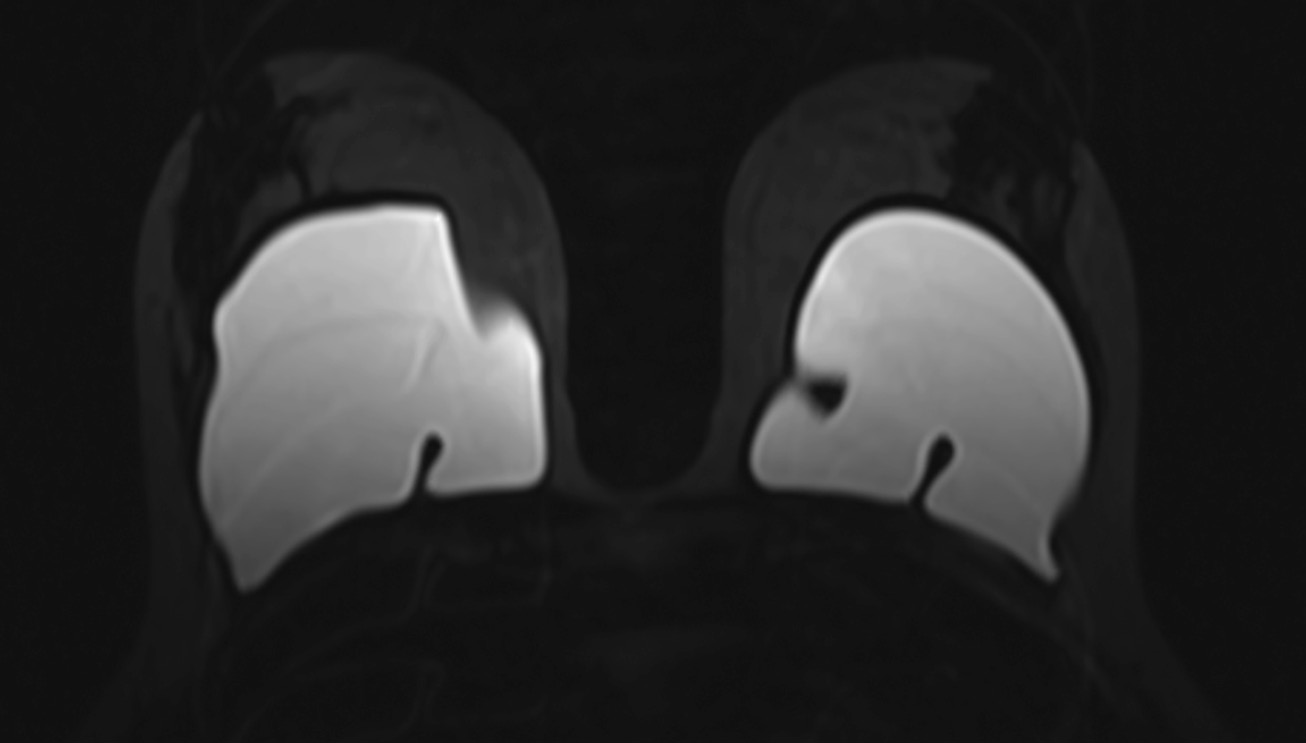 Figure 3 Axial (A) and sagittal (B) T2 TIRM Water Saturation image, in a 44 year-old female, showing right extra-capsular rupture, with evidence of peri-implant silicoma and within the right internal mammary chain and with associated multiple lymph nodes along the axilla. 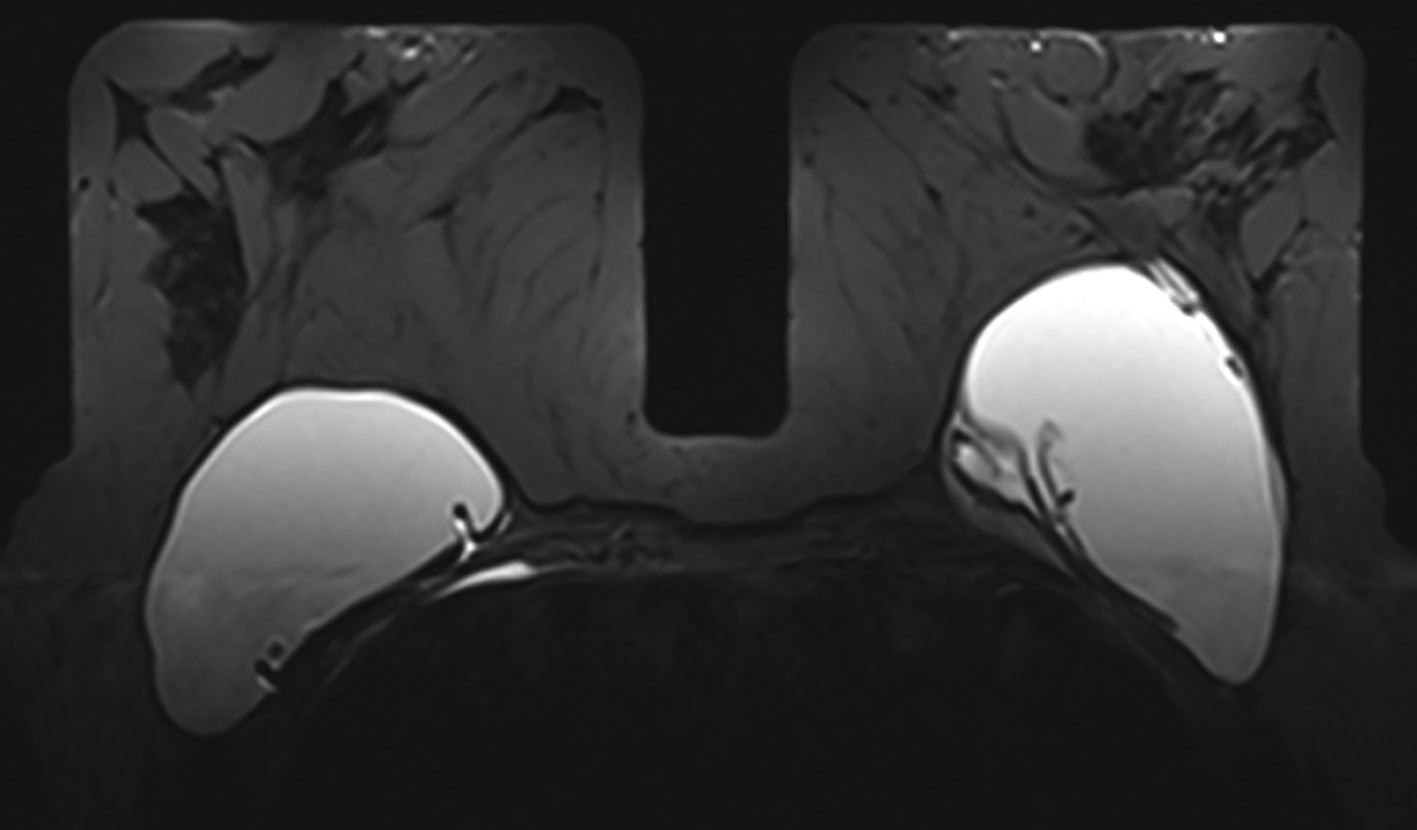 Figure 4 Axial T2 TIRM Water Saturation, in a 30-year-old female, showing right extra-capsular rupture and silicoma within the pectoralis muscle; on the contralateral side, there is evidence of intra-capsular rupture, with associated linguine sign.

The results of this double-center retrospective study, show an incidence of PIP implants rupture of 36%, compared to other breast implants.

Breast augmentation is one of the western world’s most common cosmetic surgical procedures (7). The majority of breast implantations are done for augmentation purposes and a minority are done for correction of congenital abnormalities (15). Like any medical device, silicone breast implants have a limited product life. This is particularly important considering the young age of the majority of patients. Complications of breast implantation include tenderness, capsular contracture and rupture. Rupture may result from trauma, deterioration of implant shell with time or manufacturing defect. The resulting leaked silicone gel may remain within the scar tissue capsule as an intra-capsular rupture or may migrate outside the capsule but remains in the breast tissue as an extra-capsular rupture (16).

Silicone implants rupture incidence is estimated to be 8% in asymptomatic women and 33% in symptomatic women (17-19). Hölmich et al. in a prospective study of third-generation breast implants, demonstrated on average, 2 per 100 implants rupture per year (20); they also showed that the probability that a device would be intact after augmentation mammoplasty was 98% after 5 years and 83-85% after 10 years. In more recent papers, the reported rupture rate ranged from 8% to 11.1% at 9-11 years, with a rupture rate per patient, ranging from 15.1% to 15.4% (21-23).

In 2006, early reports were published on the unusual rupture rates of PIP implants and mechanical testing of the PIP implants, demonstrated the implants were more susceptible to rupture and more of an irritant potential, in contrast to the conventional silicone implants. The PIP Company went into liquidation in 2010 after the AFSSAPS revealed that had been using non-medical grade silicone filler and on December 2011, consequently, French government advised removal of all PIP implants. Official chemical analysis has recently revealed, that the filler of the PIP implant contains a higher proportion of low molecular weight silicone, compared to a medical-grade product, and it is this, that is responsible of the early shell weakening and rupture (2).

In a recent paper, Berry reported a PIP implant rupture rate of 15.9-33.8%; however, these results were obtained from explantation data based on less than 10% (42 patients) of the original cohort of 453 women who had PIP implants in their series (7). In a previous work by Maijers et al. (6), the authors studied 224 PIP implants in 112 women; in particular, the authors compared two cohort of patients, respectively from 2000 (using medical grade silicone) and 2001 (using non medical grade silicone), with surgery as end point in all patients. The authors found a higher incidence of extra-capsular rupture (overall rupture prevalence of 24%), compared to other implants; although no significant difference was observed in rupture rates between the two cohorts.

Oulharj et al. in the largest published series to date, conducted a retrospective study to define the rupture rate of PIP implants and the complications that arise. A total of 828 PIP breast implants were removed in 455 patients. The rate of ruptured implants was 7.73% (64/828), corresponding to 11.6% of patients. A peri-prosthetic effusion was associated with rupture in 44% of cases. Peri-prosthetic capsule biopsy demonstrated the presence of a foreign body, which seemed to be silicone, in 26% of cases and the presence of inflammation in 13% of cases. A statistically significant difference was found between the rates of rupture for texturised implants as compared to the smooth-surfaced implants. These authors advice a preventive explantation of PIP breast implants that is justified given the high failure rate and patients’ exposure to silicone gel that do not comply with European community standards in the absence of rupture, through the early perspiration of implants (24).

Quaba et al. have shown higher rates of PIP implant failure; these authors observed a total of 144 ruptured implants removed from 119 patients, giving a rupture rate of 35.2% per patient and 21.3% per implant, over a mean implantation period of 7.8 years (5). Our data in agreement with this latter study, confirm a high incidence of PIP implants rupture (36%) compared to other breast implants, although the populations are different. The final expert report from the department of health (DoH) recognize the possibility that PIP implants are 2 to 6 times more likely to rupture compared to other implants, with the events occurring within the first 5 years (25).

Another important finding of our study, is the observation of a high incidence of spread of silicone to axillary nodes, compared to other cohesive gel implants; in a previous study, no evidence of gel migration was observed in a series of 106 patients (17); in a recent pictorial review, on ruptured PIP breast implant, Helyar et al. have shown several cases of silicone adenitis (18); in our study we observed an overall incidence of silicone axillary spread, as assessed by MRI of 11% (7 out of 64 patients). In addition, we also observed in 5 out of 64 (8%) patients, migration of silicone into the anterior mediastinal and thoracic cavity. Despite recent publications of sporadical cases of anaplastic large cell lymphoma in breast implants (26,27), no such cases of breast implants related cancer, were observed in our series. In agreement with our results, recent studies carried out by the AFSSAPS, have allayed any fears of toxicity, of the silicone gel filler used by PIP (28).

To the best of our knowledge, no study has been published so far, in the English literature, reporting the incidence of PIP implants failure in Italy, as assessed by MRI.

Limitations of this study include the small number of patients recruited and the limited follow up period after breast augmentation therapy of 8 years; further multi-center studies in larger patients population, are warranted to confirm our results and more in general to define a correct strategy for the long-term assessment and management of silicone breast implant ruptures.

In conclusion, physicians should be aware of the possibility to encounter in their clinical practice, patients who had undergone breast augmentation with PIP hydrogel implants. The higher failure rate and incidence of local signs in patients carrying PIP implant, as shown in this study, accentuates the importance of performance and interpretation of breast MR examinations by radiologists with high expertise and training in breast MR imaging and reinforces the need for appropriate counselling and investigations of patients with such implants, to avoid diagnostic mistakes and eventually possible legal issues.