The multi-element RF transmit or transceiver arrays (1-14) have been used to improve the transmit efficiency and parallel excitation performance for MR imaging at high and ultrahigh field fields. In this work, we propose and investigate a quadrature transmit array design strategy by using single-feed circularly polarized (CP) patch antennas (15) as the RF source. It is known that use of quadrature RF coils can improve MR sensitivity by up to 41% and reduce the required excitation power by half compared with linear RF coils, therefore, they are often desired in MR imaging. However, the conventional quadrature coils with two feeding ports are geometrically cumbersome, and extremely difficult to cooperate in building RF coil arrays. In addition, the conventional quadrature coil designs show difficulties in achieving sufficient electromagnetic decoupling in an array, particularly at ultrahigh magnetic fields. Because of these technical difficulties, such quadrature coil arrays for parallel excitation currently are not readily available. It has been demonstrated that with appropriate design, a single-feed microstrip patch antenna is able to generate CP magnetic fields (16,17). The single-feed patch antenna has a very simple structure, geometrically similar to a conventional linear surface coil, and thus can be easily used for building quadrature RF coil arrays for parallel transmission (18-37), making the design of quadrature coil arrays practical. Another merit of the patch antennas using the microstrip design (7,8,13,14,38,39) is their confined magnetic fields which provide the improved element decoupling in a coil array. To validate the feasibility of the quadrature transmit array design using the single-feed CP patch antennas, an 8-element planar transmit patch array was designed and modeled at 298 MHz (the proton Larmor frequency at the ultrahigh field of 7 Tesla) and the corresponding RF field distributions, element decoupling performance, and excitation accuracy when used for parallel excitation, were investigated. The numerical calculation was implemented by using Finite-Difference Time-Domain (FDTD) method (40-42) while the excitation accuracy was evaluated by simulating the Bloch Equation (43,44).

The structure of 8-element quadrature patch array is shown in Figure 1. Each element was built as a nearly square ring microstrip patch antenna (15) using copper tape. The outer dimension of the ring was 12.2 cm by 12 cm, while the square slot cut was with side length of 4.4 cm. This square cutting was used to increase the path length of the surface current so as to reduce the resonant frequency to 298 MHz. This nearly square ring structure is able to generate two orthogonal modes, leading to a CP field (15). The coaxial feed port (blue points in Figure 1) was along the diagonal and very close to the square slot. The eight patch elements were equispaced distributed on the substrate and the distance between the neighboring elements was 4 cm. The ground was a copper sheet placed on the bottom of the substrate which was a piece of 6 mm thick TMM 13I material with permittivity of 13.1 (Rogers Corp., Chandler, AZ). The FDTD method was used to model this 8-element quadrature patch array, calculate the reflection and transmission parameters and evaluate the magnetic field distribution. The Yee cell size was 1 mm on three directions. The boundary condition was set as Perfectly Matching Layers (PML). The Gauss waveform was used to determine the exact frequency of the antenna array while then the Sinusoid waveform was used to calculate the RF field distribution. The stop criteria were set as the calculation converged to –30 dB. The FDTD simulation was performed by using the software XFDTD 6.4 (Remcom Inc.) on a Dell workstation with 2.33 GHz CPU. The total computation time for each setup was around ten hours. Given the size and geometry, this planar design could be potentially used for human spine imaging. 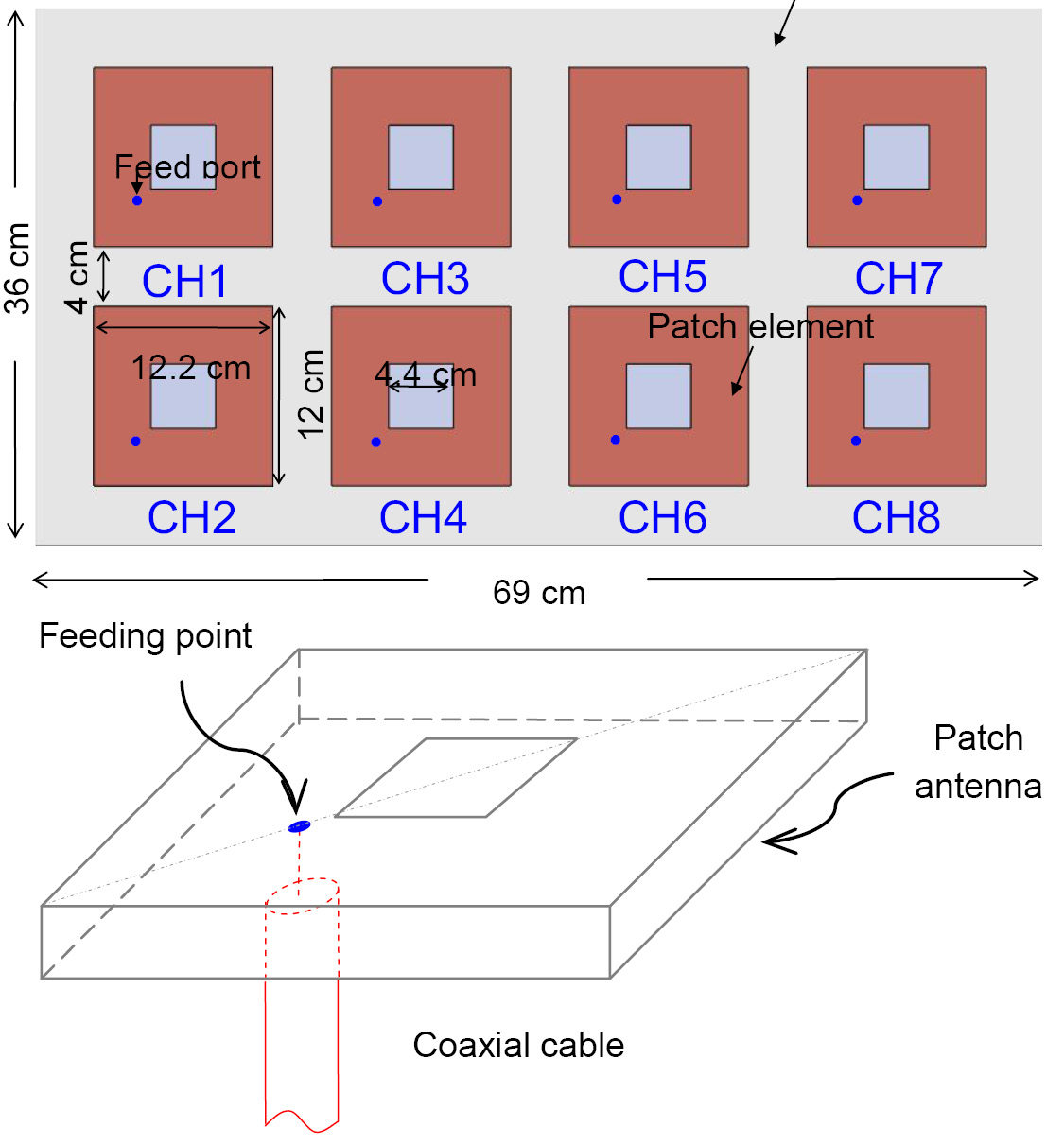 Figure 1 The prototype of the 8-element planar patch array and the physical structure of the patch antenna.

To demonstrate the transmission performance of the proposed single-feed patch antenna array, an example of parallel transmission was simulated by solving the Bloch equation. The desired excitation target is a 2-dimensional cylinder with 4 cm diameter on X-Y plane. The desired pattern was then excited using the 8-element patch antenna array at the reduction factor of 4. A constant density spiral trajectory with six turns was used in this simulation, the k-space extension was 0.5 cycle/cm. The eight RF pulses for the eight array elements were designed by using the spatial domain method (16,17), and then the Bloch equation was solved to simulate the excitation procedure to obtain the actual excitation pattern.

The simulated reflection coefficient S11 and the transmission coefficients S21 to S81 are plotted in Figure 2. At 298 MHz the S11 is –8 dB and the S21 to S81 are all better than –35 dB. Also, the S11 of a single patch coil is plotted in Figure 2C where the shape is almost identical to that of Figure 2A. All these demonstrate excellent decoupling between patch elements. Figure 3 demonstrates the current distribution on each patch antenna when individually excited, further proved the decoupling performance between the elements. Figure 4 shows the B1 field distribution of coronal plane at 10 cm above the array. The eight individual B1 profiles are shown when driving independently, each with good sensitivity pattern. Their combined B1 field has a homogeneous distribution when driving simultaneously. The axial and sagittal planes shown in Figure 5 demonstrate that the penetration of the patch array can reach 35 cm depth in unloaded case. The input RF power was normalized to 1 Watt. The average B1 at 5 mm above array surface is 3.2×10–6 Tesla while that at 35 cm depth is 2.2×10–7 Tesla, which is 7% of the field strength at 5 mm position. The B1 field is a CP magnetic field as can be seen from Figure 6, in which the B1 rotates with the time in one period. 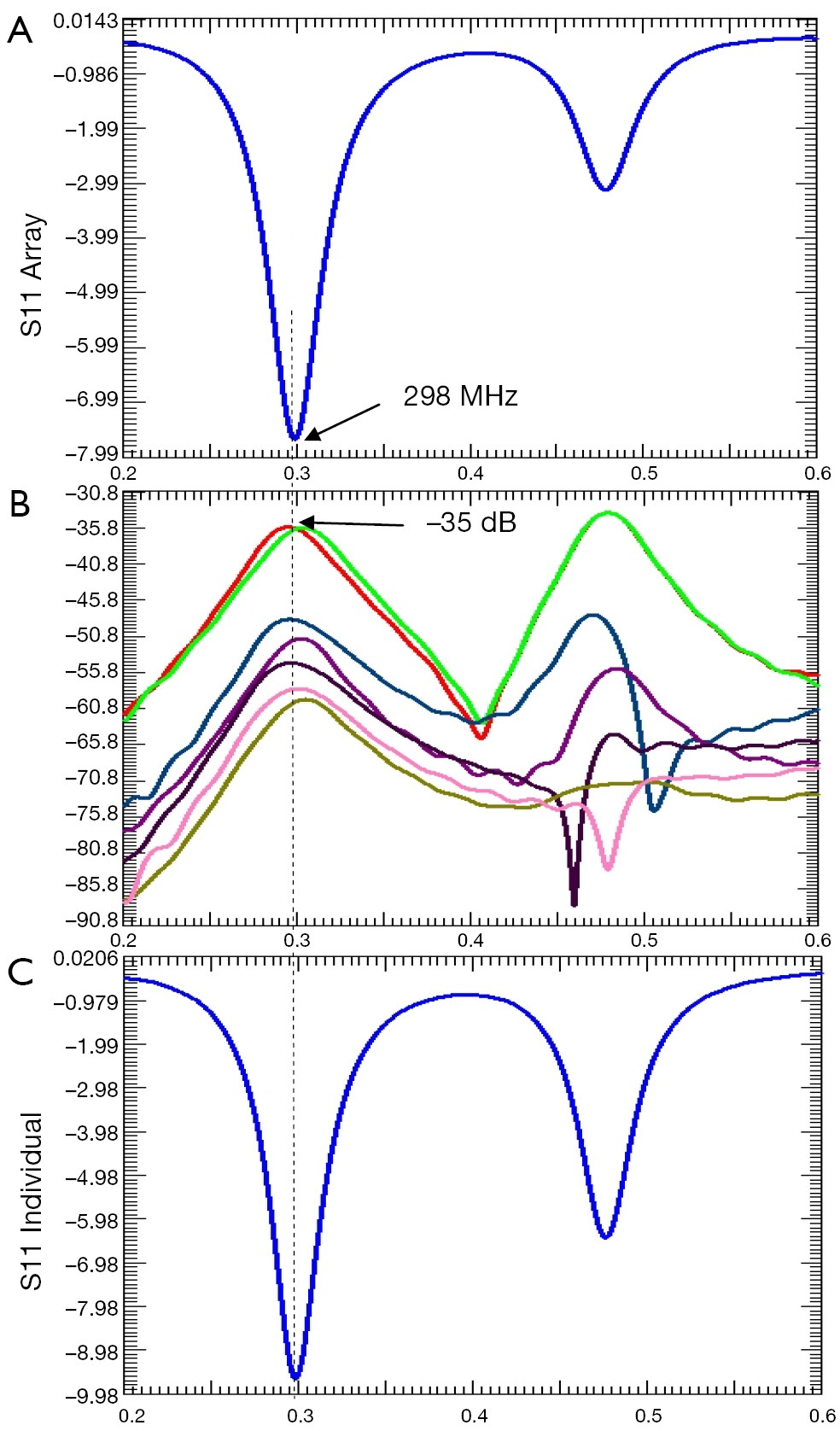 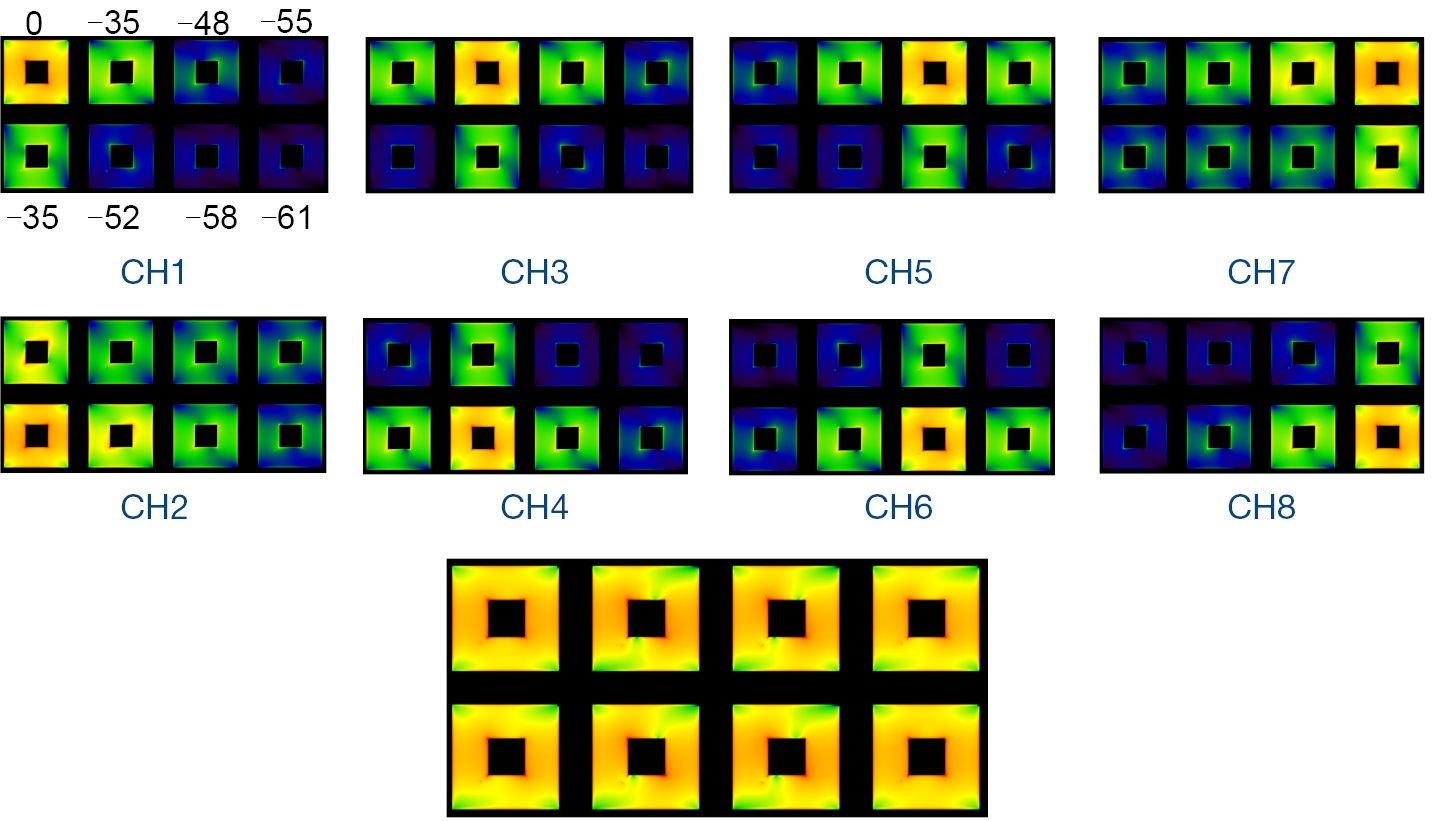 Figure 3 The current distribution on each patch antenna when individually excited, demonstrating excellent decoupling performance. The numbers on the first element denotes the relative current strength (dB) at the same feed power. 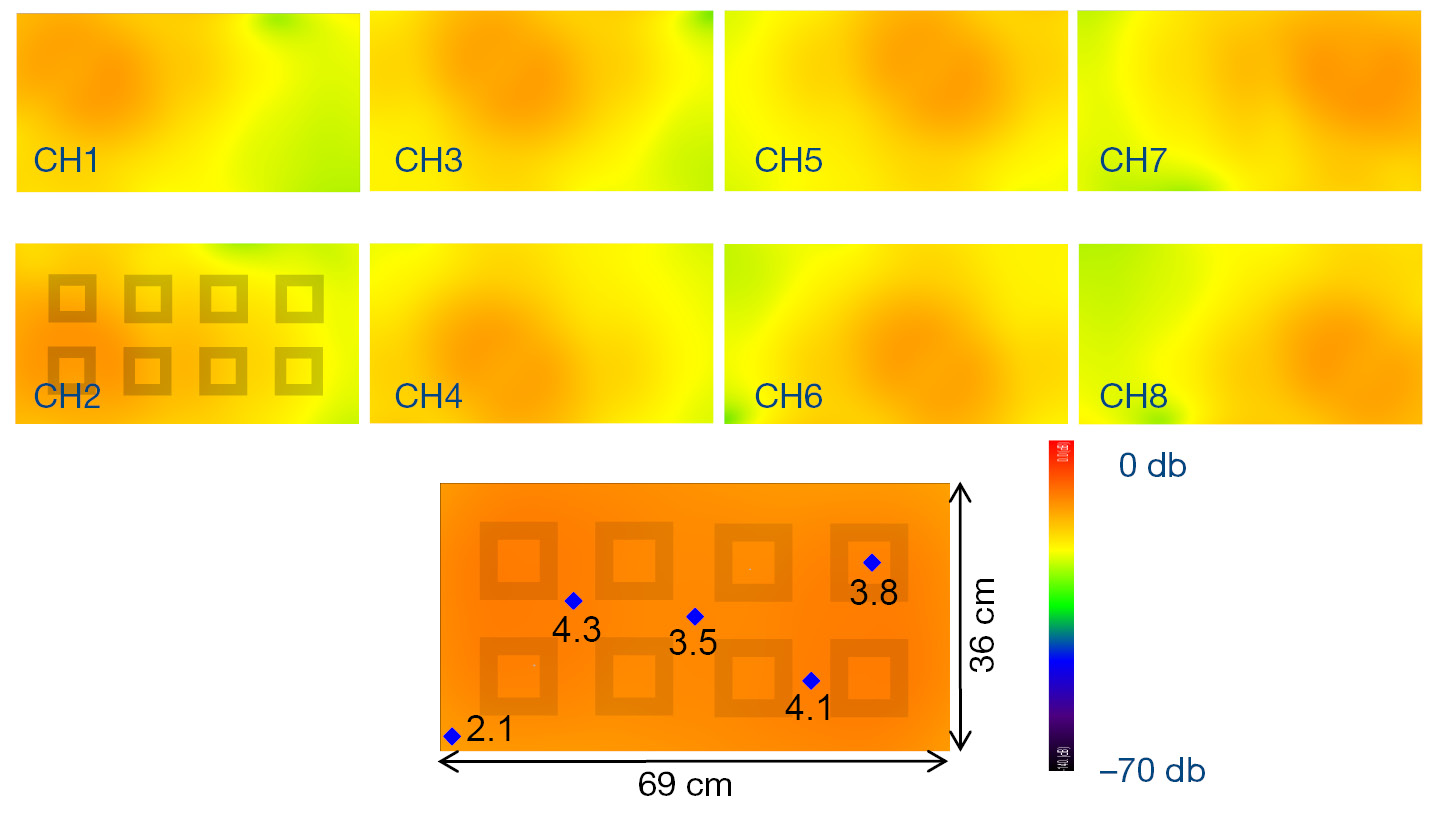 Figure 4 The individual B1 fields of eight elements and their combined B1 field of the coronal plane at 10 cm above array surface. The blue points denote the B1 field strength and the unit is mGauss. The net input power is normalized to 1 Watt.

Figure 5 (A) Sagittal plane and (B) axial plane of the B1 field near the center of the patch array. The blue points denote the B1 field strength and the unit is mGauss. The net input power is normalized to 1 Watt. 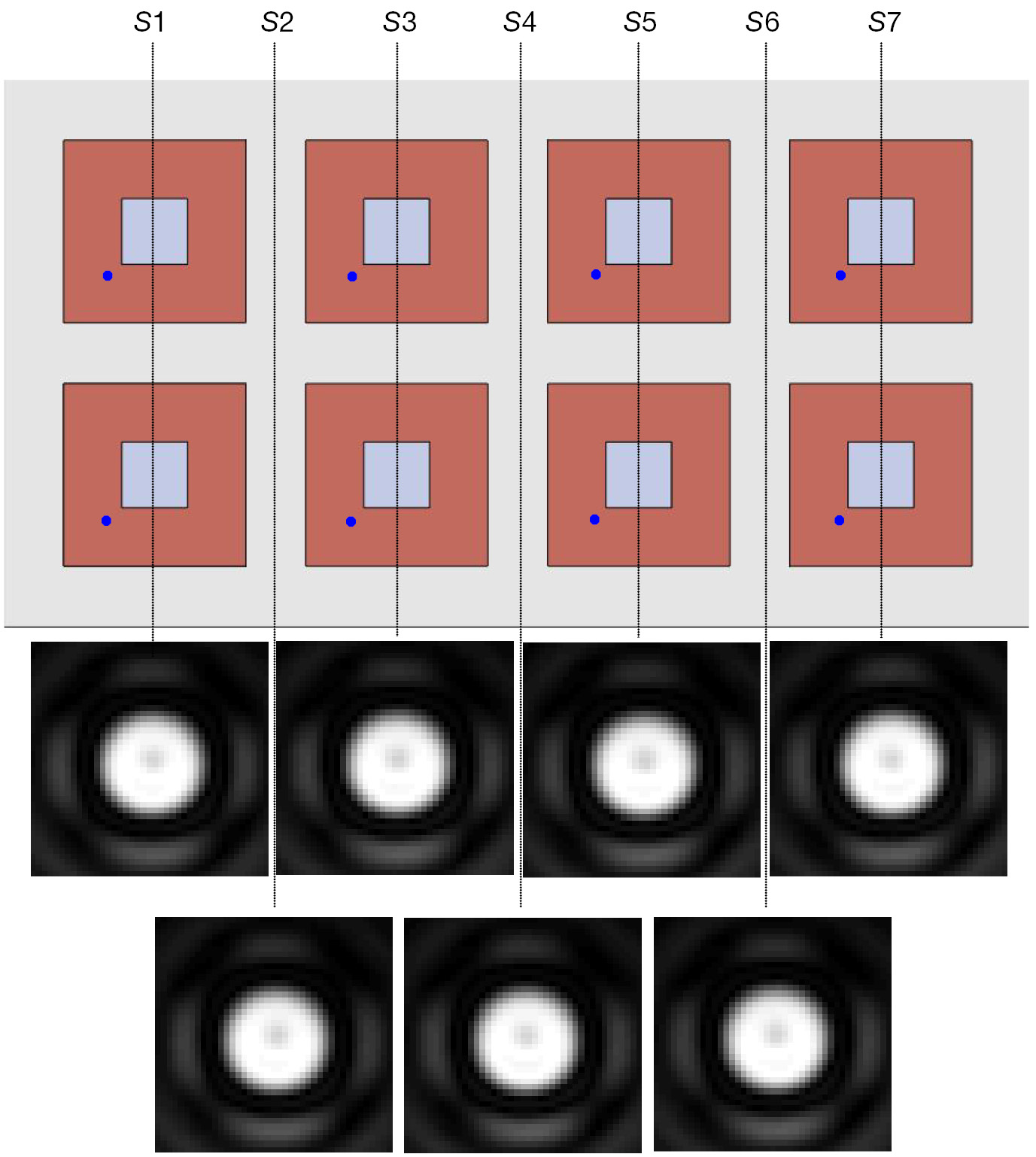 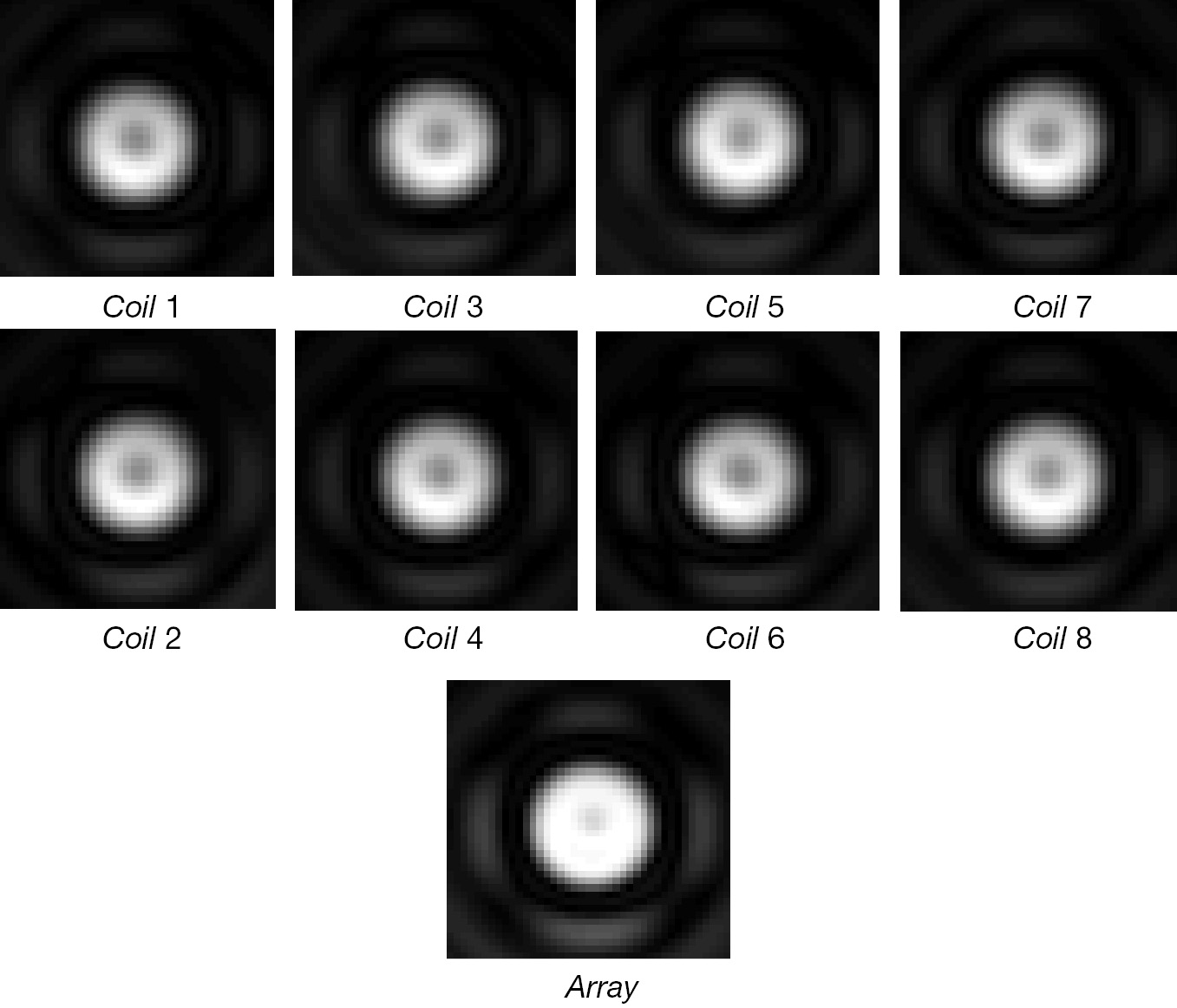 Figure 8 The excitation profile of the first slice and the individual excitation patterns of the eight patch array elements.