Unlike positron emission tomography (PET)-computed tomography attenuation correction (CTAC) of images, whereby Hounsfield units are converted to linear attenuation coefficients, PET-magnetic resonance attenuation correction (MRAC) of images relies on proton density and tissue relaxation times that cannot be easily “translated” to linear attenuation coefficients. Moreover, tissues with low MR signals, such as bones and lungs, necessitate special consideration as both produce similar MR images but differ considerably in their attenuation properties. As a result, segmentation models have been applied whereby the body is divided into four major compartments—fat, air, lung and soft tissue—each of which is assigned a fixed linear attenuation correction (AC) number (1). However, several studies have shown that MRAC using the four-compartment segmentation model results in underestimation of standardized uptake values (SUVs) compared to CTAC, particularly in the presence of bone lesions or lesions that are adjacent to bones (2). As attenuation coefficients of soft tissues are often applied to bones, a five-compartment segmentation model that includes the bones has been introduced recently. This model has yielded improved accuracy of MRAC in studies using the radiotracers 18F-fluorodeoxyglucose (18F-FDG) and 18F-Fluciclovine (3,4).

68-gallium-labeled prostate-specific membrane antigen 11 (68Ga-PSMA-11) PET/MR is an emerging modality that combines, in one procedure, information on PET-derived PSMA receptor expression in prostate tumours and MR-derived anatomical and functional information. In contrast to the sequential acquisition of PET and CT images for PET/CT studies, which necessitates good registration between the images in order to obtain good image quality and accurate SUV measurements, in PET/MR studies the MR and PET images are acquired simultaneously, resulting in theoretically ideal image co-registration. Several studies have shown the added diagnostic value of 68Ga-PSMA-11 PET/MR, over multi-parametric MRI, for detection (5), localization (6) and characterization (7,8) of tumours and involved lymph nodes (5) in patients undergoing initial evaluation for prostate cancer. 68Ga-PSMA-11 PET/MR has also been shown to be accurate and reliable, compared to 68Ga-PSMA-11 PET/CT, in depicting nodal and osseous metastases (9,10) and in the pre-operative prediction of T and N stages in high-risk prostate cancer patients (11). Limited pelvic 68Ga-PSMA-11 PET/MR has also been shown to be useful for the initial evaluation of histological biopsy-proven prostate cancer and to be superior to PET/CT in detecting extensions of localized disease, mainly due to the high soft tissue resolution of MR (12).

We evaluated the five-compartment segmentation model, which incorporates bones, in 68Ga-PSMA-11 PET/MR studies in patients undergoing evaluation for prostate cancer.

This retrospective study of prospectively collected data was approved by the institutional ethics committee (approval number, 2015024). Between December 2017 and February 2018, 26 consecutive prostate cancer patients scheduled for a clinically-indicated 68Ga-PSMA PET/CT study—either for initial staging of prostate cancer or due to biochemical recurrence after therapy—were contacted by the study coordinator and offered to participate in the study. Written informed consent was obtained from all patients prior to study participation.

The patients underwent a dedicated 68Ga-PSMA-11 PET/MR of the prostate immediately after receiving a tracer injection dose of 2–4 mCi (75–150 MBq). The patients were instructed to urinate before the study and none of them underwent urethral catheterization.

68Ga-PSMA-11 PET/MR was performed on the Biograph mMR (Siemens AG, Healthcare Sector, Erlangen, Germany) using the syngo MR E11P operational system. The patients were placed in the supine position and only their pelvis was covered with a 24-channel spine radiofrequency (RF) coil integrated within the MR bed and a surface body coil (each of them comprising 6 channels). PET scanning of the pelvis began immediately after 68Ga-PSMA-11 administration with an acquisition time of 20 minutes. PET data were acquired in the list mode with the following reconstruction parameters: high definition PET + ordered subset expectation maximization (OSEM) iterative algorithm, 3 iterations and 21 subsets, Gaussian filter: full width at half maximum (FWHM) 4.0 mm; scattered correction.

MRAC was based on three-dimensional (3D) Dixon VIBE sequence using the controlled aliasing in parallel imaging results in higher acceleration (CAIPIRINHA) technique acquired in transaxial orientation and reconstructed in coronal orientation (Table 1). A coronal µmap was created by segmenting the image data into four compartments with fixed attenuation coefficients: air (0 cm−1), lung (0.0224 cm−1), fat (0.0857 cm−1) and soft tissue (0.1 cm−1). Bone attenuation coefficient was similar to that of a soft tissue. The five-compartment segmentation model was based on the method described by Paulus et al. (13). Briefly, µmap images are produced with the four- compartment model, then bone information is added using a model-based bone segmentation algorithm that assigns continuous attenuation coefficients for bones, ranging from 0.1 to 0.2485 cm−1. Only major bones (skull, spine, pelvis and proximal femurs) are included in this model. 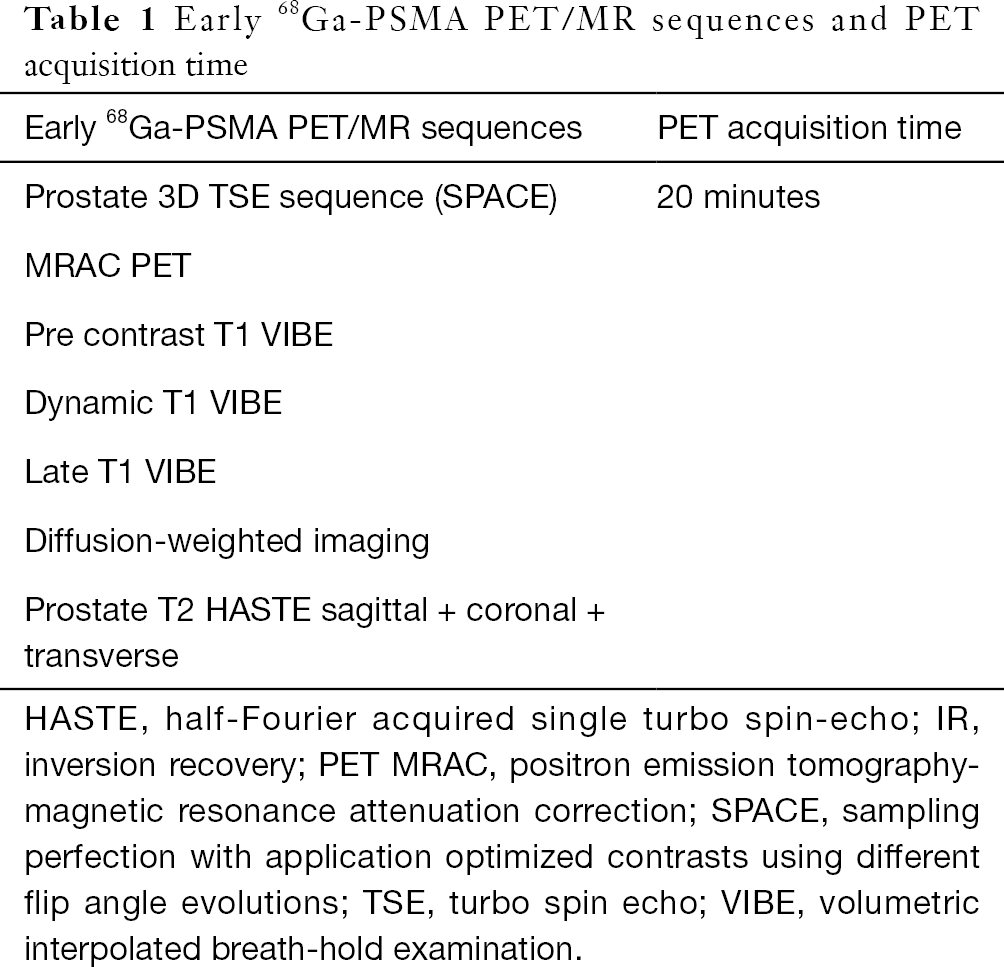 Following the PET/MR imaging study, and 60 minutes after the 68Ga-PSMA-11 injection, PET/CT imaging was performed on an integrated PET/CT scanner (GEMINI TF, Philips Medical Systems, Cleveland, OH). Prior to the PET/CT study, intravenous iodine contrast media 1.5 cm3/kg (Omnipaque 300; iohexol 0.623 g/mL, GE Healthcare, Chicago, IL, USA) was administered to all patients except to those with a known iodine hypersensitivity or renal insufficiency. Contrast-enhanced 64-slice multidetector computed tomography (MDCT) was performed from the skull base to the mid-thigh with tube voltage of 120 kVp, spiral CT at 0.8 sec per rotation with modulated 30–250 mAs, section thickness of 3.0 and 3.0 mm intervals with image reconstruction every 3.0 mm. PET emission images were obtained using a weight-based protocol, 2 minutes of acquisition per bed position, with five to six bed positions from the skull base to the mid-thigh. PET data was reconstructed using 3D-OSEM (3 iterations and 20 subsets) on a 144 matrix with CT-based AC. 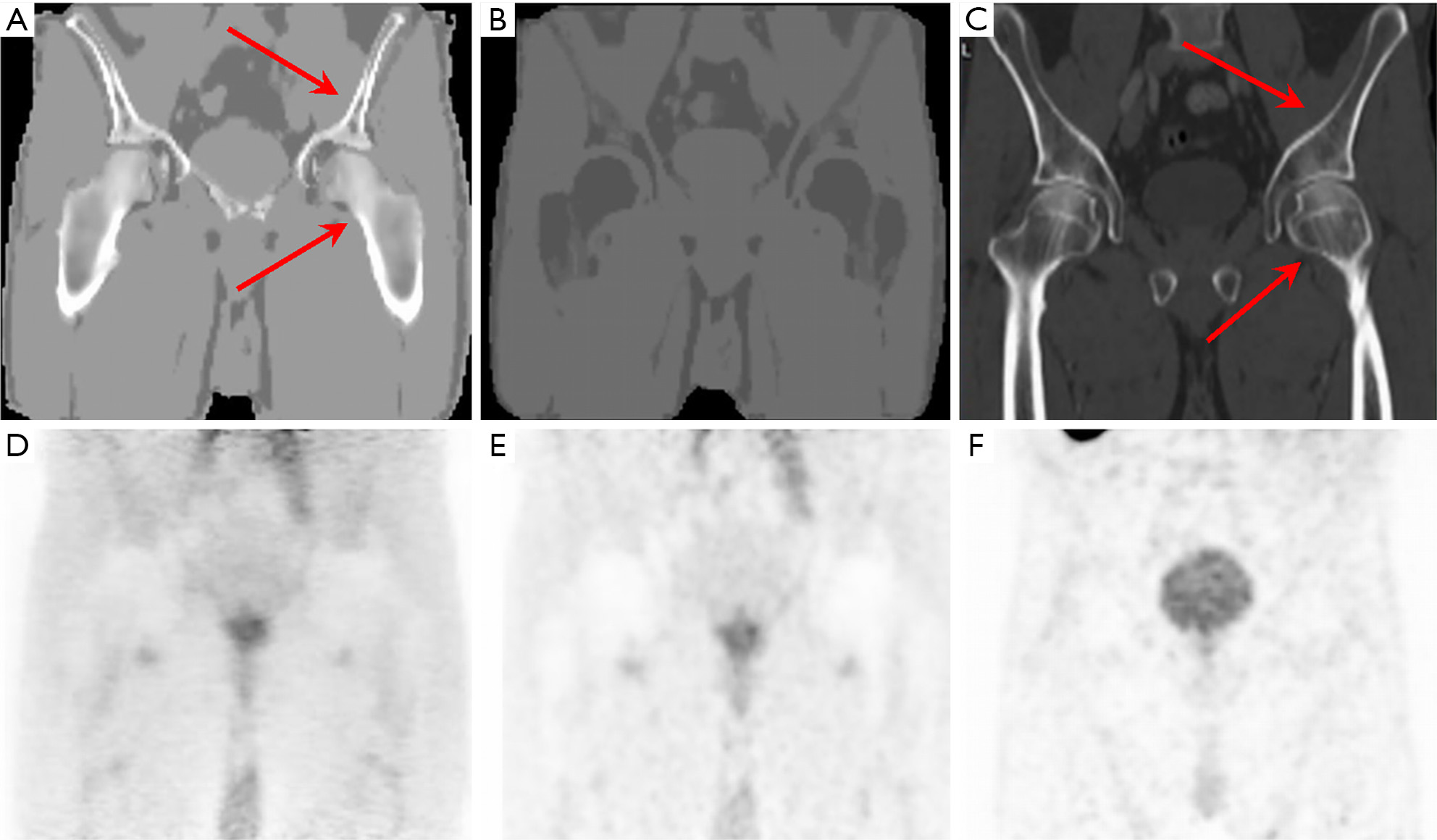 Figure 1 Coronal µmap images of the pelvis of a 63-year-old man with prostate cancer, derived from (A) five and (B) four compartment segmentation model with corresponding MRAC (D,E). A coronal plane CT image of the same area with corresponding CTAC (C,F). These images of the pelvis demonstrate the effect of adding the iliac bones and the femurs (arrows) on AC images. MRAC, magnetic resonance attenuation correction; CTAC, computed tomography attenuation correction.

The means of SUVmax and SUVmean of the two MRAC models were compared using paired t-test.

The effect size (ES), which shows the magnitude of the difference between the two MRAC models for each tissue, was calculated by Cohen’s d statistic:

The coefficient of determination (R2) was calculated for each tissue.

Comparison of correlation coefficients was performed using the Z test.

Twenty-six patients (mean age, 69.4±9.3 years) were included in the study and underwent 68Ga-PSMA-11 PET/CT and 68Ga-PSMA-11 PET/MR of the pelvis. Of these, 25 patients presented for staging of prostate cancer and one patient had a prior radical prostatectomy and was evaluated for recurrent disease. Twenty-two prostate lesions were evaluated (one patient had a prior prostatectomy and three patients had no 68Ga-PSMA-11 uptake in the prostate gland). Five involved lymph nodes and three bone metastases from different patients were analysed collectively due to their small number. In addition, normal prostate SUVs were measured in 21 patients (of the remaining 5 patients, one had prior prostatectomy and 4 patients had diffuse involvement of the prostate gland). Sacral and gluteal SUVs were measured in all of the patients.

There was a statistically significant difference between SUVs of the gluteus, sacrum, prostatic lesions and normal prostate tissue measured by the four-compartment vs. the five-compartment MRAC models (P=0.001, 0.013, 0.003 and 0.005, respectively; Table 2). No statistically significant difference was noted for SUVs of metastases and L/G ratio. The ES for the difference between the models was small for L/G ratio and medium for all other tissues that were measured.

Correlation between four- and five-compartment MRAC models and CTAC model 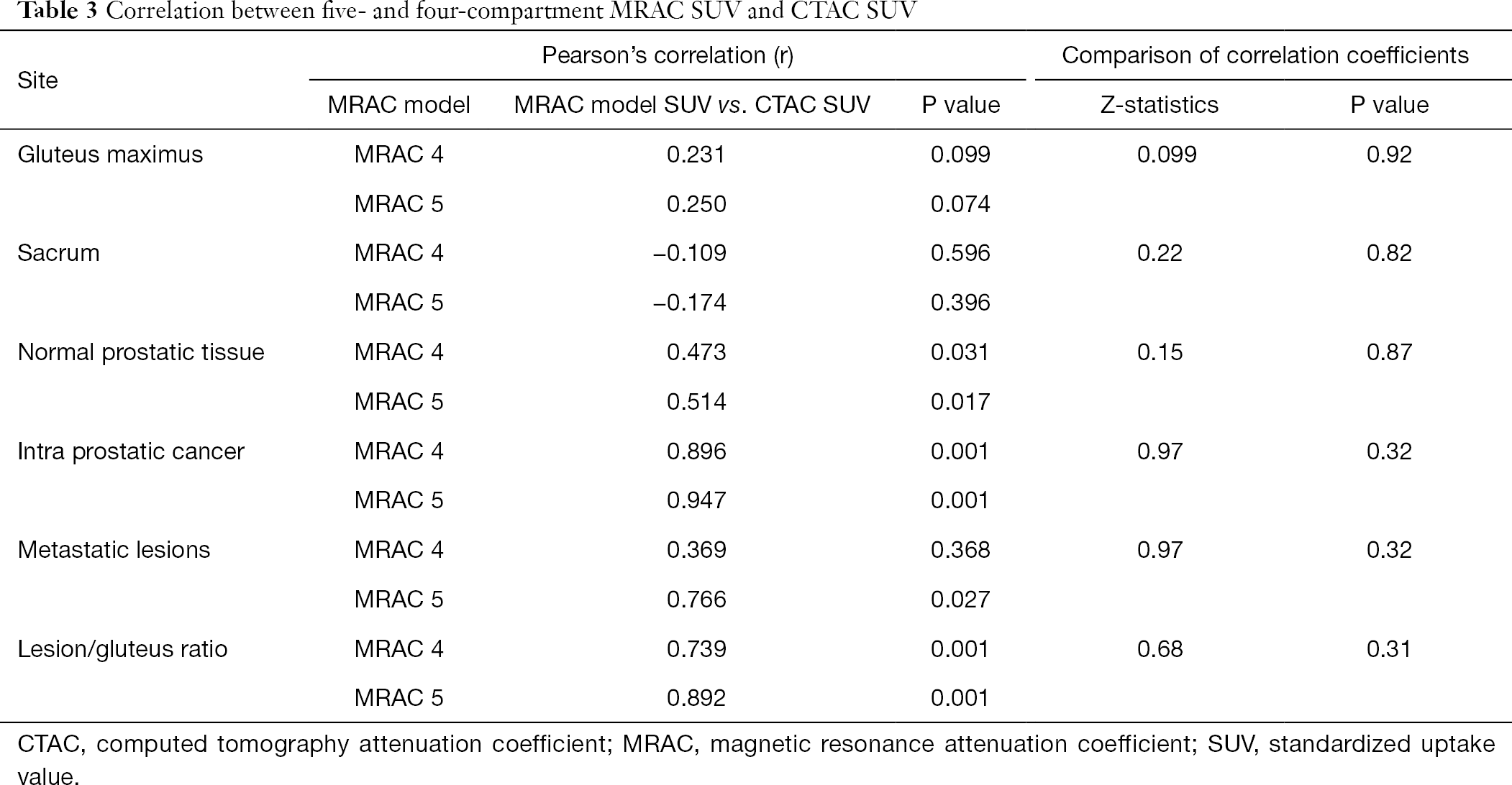 At present, µmap images in PET/MR are commonly attained by using fast volumetric Dixon-based sequences with fat/water separation, yielding four compartments with fixed attenuation coefficients (air, lung, fat and soft tissue). MRAC of bones has been a technical challenge because the MR signal of cortical bones is very low, resembling the AC of air, and dedicated sequences for bone imaging using ultrashort or zero time to echo (UTE and ZTE, respectively) are time consuming. As a result, dedicated bone sequences have been applied in limited cases, such as head imaging. In other cases, such as whole-body imaging, attenuation coefficient of soft tissues was assigned to bones. Several studies have evaluated the effect of soft tissue to bone AC substitution on PET quantification and reported differences of approximately 10% in tracer uptake in soft tissue lesions and bone lesions (2). Keereman et al. have shown a difference of 2–17.5% in tracer uptake when cortical bone AC was replaced with soft tissue AC in a simulated phantom model. In that study the relative error for uptake in the prostate gland was 4.2% (14). Samarin et al. examined the impact of replacing bone AC with soft tissue AC in PET/CT and reported an underestimation range of 1.5–30.8% for uptake in bone lesions and of 0.2–4% for uptake in lesions located adjacent to bone (15). All of these studies have emphasized the importance of adding a bone compartment for accurate PET quantification.

Our PET/MR software uses a model-based AC method for bone segmentation. Paulus et al. reported that SUV underestimation in bone lesions decreased from 7.3% to 2.9% using this model (13). Oehmigen et al. (3) evaluated the impact of applying a five-compartment segmentation model with bone segmentation over the four-compartment model. Quantification of SUVmax in 99 lesions showed that the highest increase in SUVmax was in bone lesions with an average of 1.4%±2.5% (3).

In contrast to previously mentioned studies, which used 18F-FDG as a radiotracer, Elschot et al. have investigated the effect of adding bone segmentation to PET quantification in prostate cancer patients who underwent PET/MR with 18F-fluciclovine, a dedicated prostate cancer radiotracer. They found that the differences in SUVmax in the prostate bed and in lymph node lesions were 2–3%, and concluded that inclusion of bone segmentation is of no value for clinical evaluation of soft tissue lesions (4).

To the best of our knowledge, the current study is the first to evaluate the effect of incorporation of bone segmentation on PET quantification using 68Ga-PSMA-11. We found significant differences in SUV between the four-compartment and the five-compartment model (which includes bone segmentation), with an average difference of 12% for prostatic lesions and 8% for normal prostatic tissue. These differences are more prominent than those reported in other studies. This might be attributed to the higher specificity of 68Ga-PSMA-11, compared to FDG, in prostate lesions, which resulted in higher SUVs and therefore in a more prominent effect on AC. The normal sacrum also demonstrated significant difference in uptake between the four-compartment model and the five-compartment model, whereas the lack of difference between the two models in uptake in metastases might be attributed to the small number of lesions that were assessed and to the summation of SUVs from bone lesions and involved lymph nodes. As PET quantification is very important for characterizing lesions and for evaluating the response to therapy on sequential studies, our results suggest that follow-up studies must be performed with the same body segmentation.

Our study has several limitations. First, the small number of patients limits its power. Second, the study’s retrospective nature has inherent limitations. Third, the small number of lesions, particularly the small number of metastases precludes reaching a definitive conclusion, which is reflected in the relatively low ES. Fourth, although very good to good correlation was found between MRAC and CTAC for prostatic lesions, SUVmax was not compared among the models due to the different time interval between radiotracer injection and scanning of the patient; therefore no definite conclusion can be drawn regarding the superiority of one model compared to the other.

Ethical Statement: This study was approved by the institutional ethics committee (approval number, 2015024). Written informed consent was obtained from all patients prior to study participation.