The clinical features are variable, which range from mild neck discomfort and radiculopathy to progressive quadriplegia. The spectrum of presentation is attributed to the speed of haematoma development and degree of compression on the cervical spinal cord (1). Early diagnosis is key to optimal management, so that patients who warrant urgent surgical decompression are identified. If missed, SCEH can result with permanent neurological deficit (2). The first imaging investigation is typically CT/CTA, performed to exclude more common entities such as arterial dissection or disc prolapse, but SCEH can be diagnosed if the relevant imaging features are sought.

In this paper we present 4 cases of SCEH initially diagnosed on CT/CTA, with subsequent MRI confirmation, and describe the radiological features and clinical outcomes.

An 82-year-old male presented with acute neck pain which progressed to asymmetrical incomplete quadriparesis. He was therapeutically anticoagulated on warfarin with an initial INR of 3.2.

CTA of the cervical and cranial arteries performed 4 h after symptom onset demonstrated no major arterial pathology. The pre-contrast study showed a hyperdense right posterolateral extradural collection from C2–C5, hyperdense to normal spinal canal content, raising suspicion for SCEH (Figure 1A). A small focus of enhancement was identified on the post-contrast study, thought to represent contained extraluminal contrast from damaged vessels (Figure 1B). 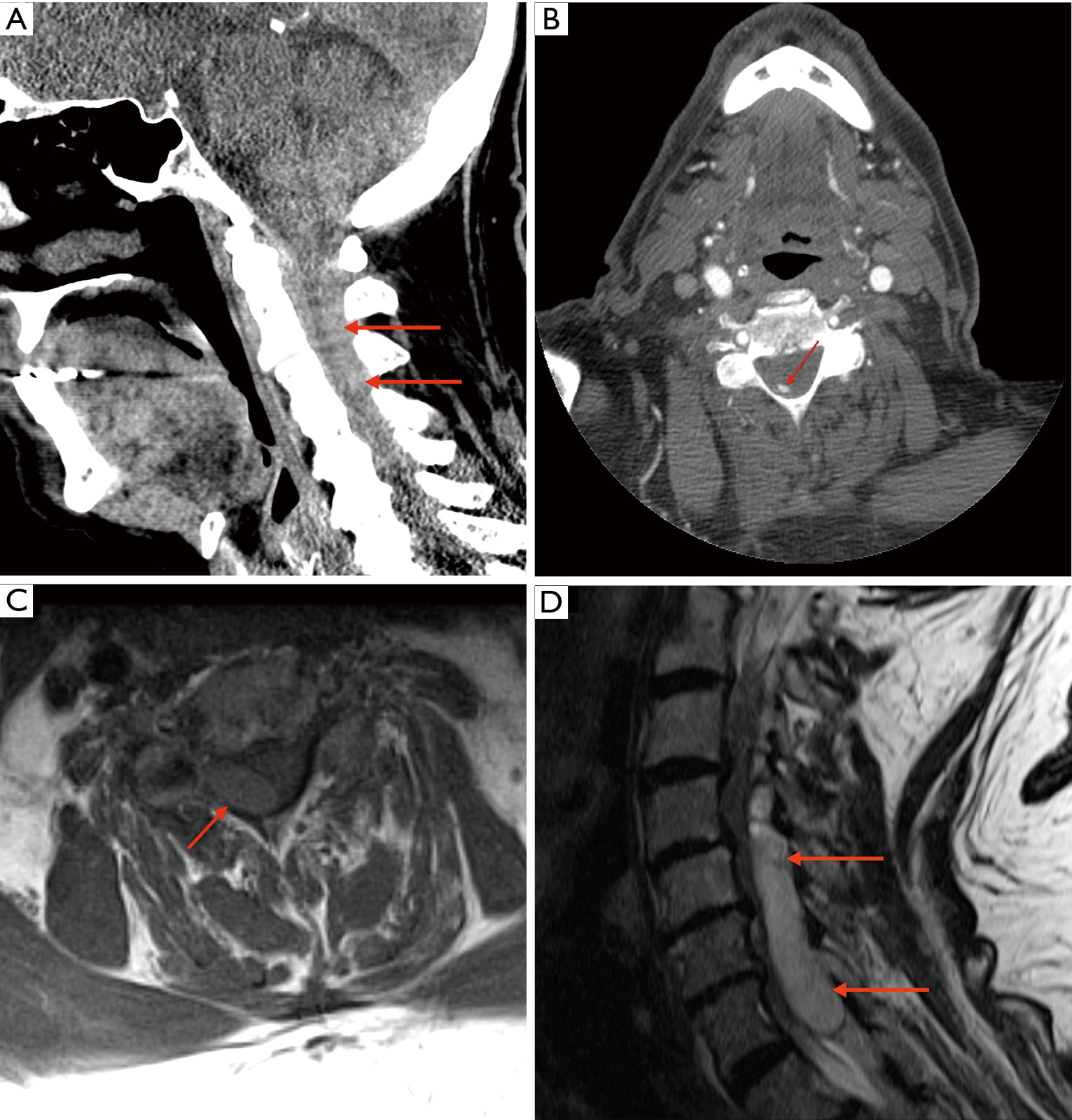 A 67-year-old male presented with acute neck and interscapular pain, which progressed to right upper limb weakness. He was therapeutically anticoagulated on warfarin with an INR of 3.1.

A 63-year-old male presented with neck and interscapular pain, which progressed to right upper limb weakness. He was taking clopidogrel only.

CTA performed one hour after presentation demonstrated mildly hyperdense right posterior extradural collection. There was thecal effacement and cervical cord compression (Figure 3A). MRI 18 hour later confirmed SCEH with heterogenous T2 hyperintensity (Figure 3B) and homogenous T1 isointensity (Figure 3C). After discussion with the neurosurgical team, the patient was managed conservatively. A repeat MRI performed 24 h later showed substantial resolution of the haematoma, and she was discharged home with complete resolution of all neurological deficits.

A 65-year-old female presented with atraumatic sudden neck and interscapular pain, with full range of movement of her cervical spine. She developed bilateral arm paraesthesia associated with hyperventilation and increased anxiety. The symptoms resolved after reassurance. 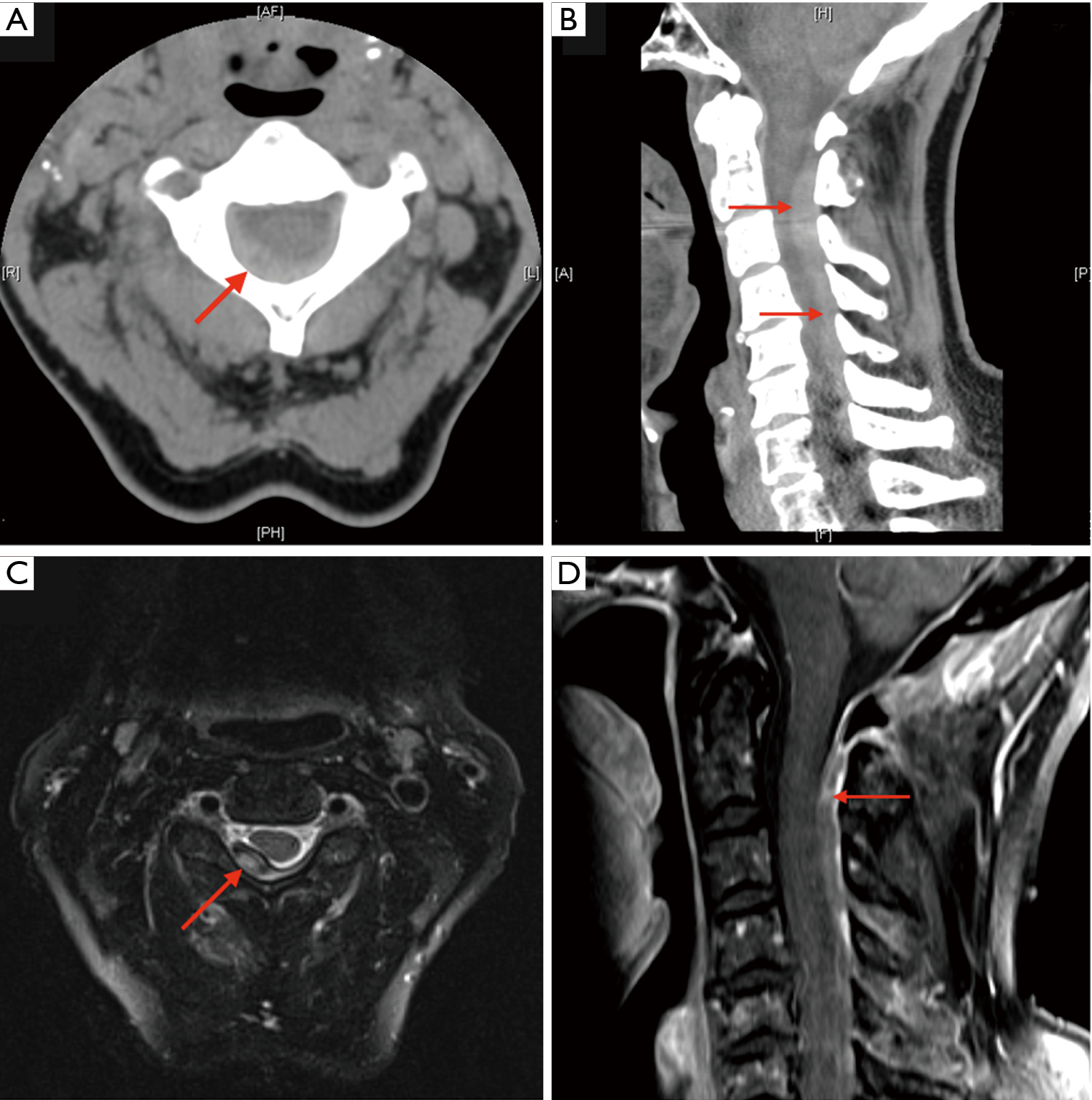 There was no acute fracture or significant prevertebral soft tissue swelling.

MRI cervical spine with gadolinium contrast was performed 36 h later confirmed SCEH. Axial T2 demonstrated heterogeneous signal with central hyperintensity and peripheral hypointensity secondary to aging of acute blood (Figure 4C). Sagittal T1 demonstrated isointense/hyperintense with patchy enhancement (Figure 4D). There was impression on the posterior dura and partial impingement of the spinal cord but no intramedullary oedema signal. The patient underwent a spinal angiogram which was normal. She remained neurologically intact and was managed conservatively. Follow up MRI performed one month later showed complete resolution of the SCEH.

SCEH is a rare neurological presentation which was first diagnosed in 1869 (1). The incidence is estimated to be around 1 in 100,000 with a male/female predominance of 1.4:1 (2,3). Reported incidence has been increasing partly due to easier access to CT and MRI, which has led to increasing recognition of SCEH even when this pathology is an unexpected finding (4).

Risk factors of SCEH include hypertension, coagulopathy, vascular malformations, pregnancy and anticoagulation use, which was of relevance in the first three cases (1,4,5). It is unclear whether the pathophysiology of SCEH is arterial or venous. The case for an arterial source has been hypothesised to be secondary to the free anastomotic arteries that connect with radicular arteries in the epidural space. The high prevalence of an SCEH expanding and causing acute spinal cord compression supports an arterial origin (1). The more widely accepted hypothesis however is that most cases of SCEH are venous in origin, with rupture of the epidural venous plexus (1,4,5). Epidural veins are thin and valveless which may lead to venous pooling; therefore, any subsequent high intra-thoracic pressure can lead to rupture. This may explain why patients might develop SCEH after performing sudden movements, such as bending, lifting a heavy object or after neck manipulation (1,6). The posterior predominance that has been noted in all of the cases presented suggests rupture of the posterior internal vertebral venous plexus, which is also supported in literature (4). Another factor for posterolateral location of SCEH is the dura being adherent to the posterior longitudinal ligament (7).

As demonstrated in all the presented cases, the common presenting symptom of SCEH is acute neck and interscapular pain, which is supported in literature (2,4-6). There can be varied neurological findings with sometimes only minimal neurological deficit (4). When there is substantial compression of the spinal cord and nerve roots, motor and sensation deficits are seen. Paraplegia or quadriplegia can result, depending on the rate and level of compression. Rarely hemiparesis can occur due to the involvement of the corticospinal tracts, which may be associated with delay in diagnosis (1,8). This is due to acute stroke or arterial dissection being the initial clinical impression, which leads to CT/CTA screening studies, as appose to MRI cervical spine (1,9). In light of this, heightened awareness is required to review spinal canal appearance when reporting these studies. Furthermore, in rare instances the neurological deficit can be transient, which can lead to diagnostic difficulty as the patient is initially investigated for a transient ischaemic attack (TIA) (10).

CT/CTA is typically the first imaging modality performed in patients subsequently diagnosed with SCEH (9), which usually manifests as an extradural lentiform hyperdense collection mildly hyperdense to expected density of normal spinal canal content, average Hounsfield Unit of 70. MRI remains more sensitive when diagnosing SCEH compared to CT (1). Previous studies report experienced radiologists not detecting SCEH on CT in up to 13% of cases (11). Furthermore, MRI is advantageous for assessment of the extent of any spinal cord compression or oedema, which is key to guiding surgical decompression and predicting neurological deficit (11). On MRI SCEH often show fusiform or spindle appearance on a sagittal view (12). They typically demonstrate acute haemorrhage signal character of homogenous T1 isointensity within the first 24 h (1,2,9,13) and then hyperintensity at 36 h due to degradation of haemoglobin to methaemoglobin (1). T2 imaging demonstrates heterogenous hyperintensity with foci of hypointensity (1,5). Contrast enhancement, either with CT or MRI can occur and correlates with contained extraluminal leaking contrast from ruptured posterior epidural venous plexus (7). Enhancement may also be secondary to aberrant vessels or enveloped vascular soft tissue (7). Contrast enhancement on CT or MRI typically appears as a ‘spot sign’ (12) or peripheral and internal enhancing septations (2). The presence of extraluminal contrast secondary to damaged epidural venous plexus may predict an expanding haematoma which correlates to poorer prognosis (12). The primary management of SCEH requires treatment of predisposing medical conditions and urgent discussion/referral to a neurosurgical centre, particularly in the presence of contrast enhancement within the haematoma.

SCEH is a rare emergency pathology which requires early diagnosis and urgent referral to specialist neurology/neurosurgery team for optimal management. High index of suspicion is encouraged in any patient whom presents with acute neck pain and variable neurological deficits on a background of anticoagulant use, hypertension, coagulopathy, pregnancy or vascular malformations. Clinical features can be variable and are commonly initially misleading.

Typical CT findings of spontaneous SCEH show a biconvex hyperdense extradural collection, with variable cord compression. Sensitivity for detection of SCEH by CT is suboptimal, and requires a routine review of the density of the spinal canal content on all neck studies. Patients with strong clinical suspicion should proceed to MRI if the CT is negative, which is gold standard in diagnosis and is also able to assess for spinal cord compression. On T1 assessment a SCEH demonstrates an age-related variation in signal intensity, changing from isointense to increasingly hyperintense signal over 36 h. T2 signal typically demonstrates heterogeneously hyperintense signal.

Post contrast images should be performed which can occur with either CT or MRI. There are a variety of causes for enhancement but of most significant is secondary to rupture of a posterior epidural venous plexus which portends further haemorrhage. Therefore, heightened awareness is encouraged for any presence of contrast enhancement shown by either modality.