Effects of acupuncture on craving after tobacco cessation: a resting-state fMRI study based on the fractional amplitude of low-frequency fluctuation

Tobacco use is a significant threat to human health and social development, which is estimated to cause approximately 7 million global deaths each year (1). It is one of the main risk factors driving the growing epidemic of non-communicable diseases (NCDs), especially in China. Currently, a staggering 44% of the world’s cigarettes are smoked in China (2), and one million people die of tobacco-related diseases every year (3), many of them in the prime of their productive years.

Acupuncture, as one of the ancient non-pharmaceutical therapies, is widely accepted in China and is used for pain, stroke, neuropsychiatric diseases, etc. for more than 2000 years. In 1973, acupuncture was firstly used for tobacco cessation in Hong Kong (4). Following this inspiration, a large number of studies explored the efficacy of acupuncture on tobacco cessation. Our previous study has recruited more than 8000 smokers who were treated with acupuncture at Baihui (GV 20), Lieque (LU 7), Hegu (LI 4), Zusanli (ST 36), Sanyinjiao (SP 6), and Taichong (LR 3) for 8 weeks; the self-reported 7-day point abstinence rate was 34.00% at 8 weeks and 18.40% at 52 weeks, indicating acupuncture was safe and effective for smoking cessation (5). The other previous study was Chinese Acupuncture for Tobacco Cessation Research (C-ATCR) (6), which was the most rigorous randomized controlled trial to date; the 24-h point abstinence rate verified by carbon monoxide was 43.00% at 24 weeks in the acupuncture group, which was similar to 44.00% in the NRT group; it provided stronger evidence to support the safety and efficacy of acupuncture for smoking cessation.

However, despite its acceptance and efficacy, the neural mechanisms underlying acupuncture for tobacco cessation have not been well understood and still need to be further investigated. Fortunately, functional neuroimaging technologies have provided a new perspective to improve our understanding of the acupuncture mechanisms by measuring associated changes in blood flow, and emerging evidence suggests that the acupuncture effect was mediated by the central nervous system in humans (7). However, there is little high-quality data about the mechanisms of acupuncture for smoking cessation in China and elsewhere. In the only study reported to date (8), it showed “acupuncture alleviates cue-induced cravings through the regulation of activity in brain regions,” but this study was limited by small sample size and inappropriate methods for acupuncture.

Therefore, built on our previous clinical trials and fMRI studies (9), we designed this study to aimed to (I) observe the immediate effects of acupuncture on smoking craving, and (II) to analyze the resting-state brain function in the participants with 24-h tobacco abstinence by using the fractional amplitude of low-frequency fluctuation (fALFF) approach (10). We hypothesized that acupuncture might relieve the smoking craving through regulation on the reward system.

The study was approved by the China Ethics Committee of Registering Clinical Trials (ChiECTCT-2013014) and registered in the Chinese Clinical Trial Registry (ChiCTR-TRC-13003544). All the participants signed the consent forms after informing the purpose and protocol of this study. The scanning site was Guang’anmen Hospital of China Academy of Chinese Medical Sciences (Beijing, China).

In the scan period, the scan process was scan – acupuncture – scan. During the scan, the participants were in supine position; a foam pillow was used to minimize head movement, and rubber headphones were used to reduce the noise. The participants were required to rest with closed eyes and quiet breathing, not deliberately think. Acupuncture was applied between two scans. After two scans, fMRI data were collected. 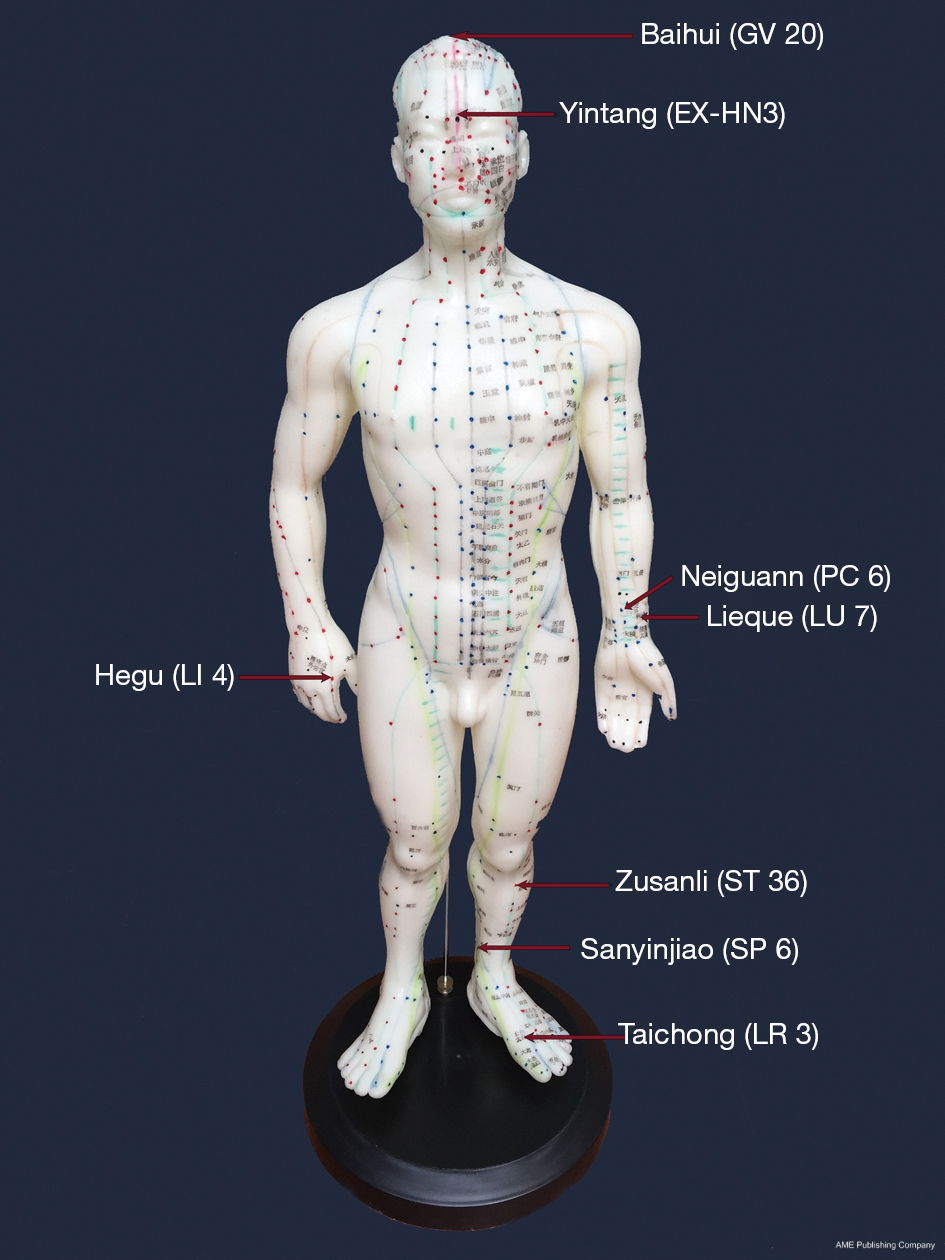 Subjects were in supine to expose the body acupoints.

Routine fertilization was given on the selected acupoints with 75% medicinal alcohol before acupuncture. Needles were horizontally inserted at Baihui (GV 20) while vertically inserted at other acupoints with a depth of 25 to 50 mm. The mild reinforcing and reducing technique were applied at all acupoints. The arrival of qi (needle sensation) was required, and needles were required to stay at the acupoints for 30 min. Meanwhile, electroacupuncture device (HuaTuo SDZ-III type) was used and connected at Lieque (LU 7) and Zusanli (ST 36) with continuous wave (15 Hz) for 30 min. The needles were withdrawn quickly to avoid bleeding or hematoma.

Measures of craving for smoking

A self-made one-item ten-point scale, a 9-item version of Minnesota Nicotine Withdrawal Scale (MNWS) and a 9-item version of Questionnaire of Smoking Urges (QSU) were used to measure the pre-scan and post-scan craving for smoking. High score of the three scales indicated intense craving for smoking. Each subject completed the three measures before the beginning of the 1st scanning session and after the end of the 2nd scanning session.

Study flow and description of participants 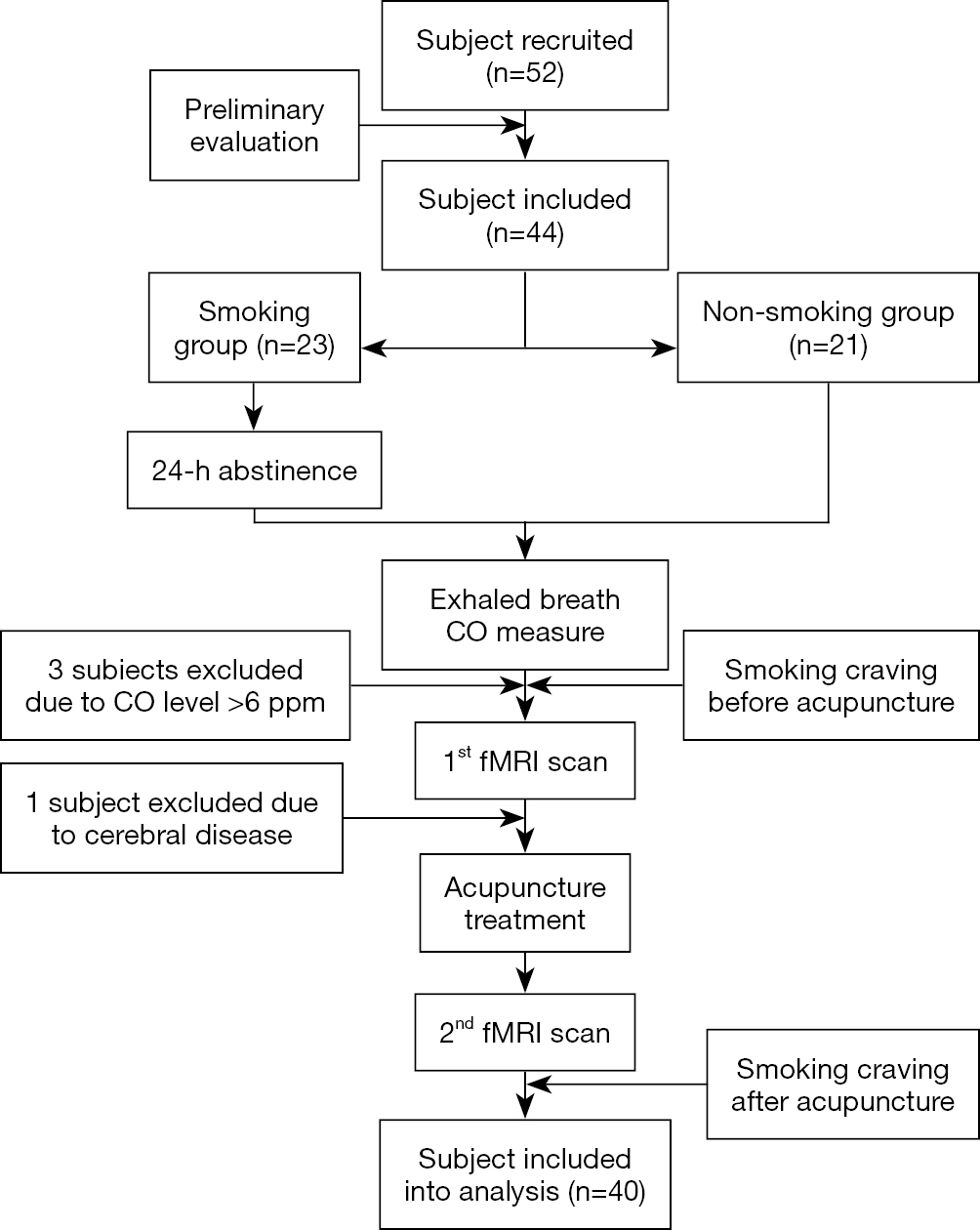 The baseline characteristics were well balanced between the two groups (Table 1). The only imbalance noted was a self-reported health score on a scale of 0–100 points (P<0.05). Also, the smoking pattern indicated moderate tobacco dependence in smoking participants, while the three craving scales indicated an intense craving for smoking before acupuncture. 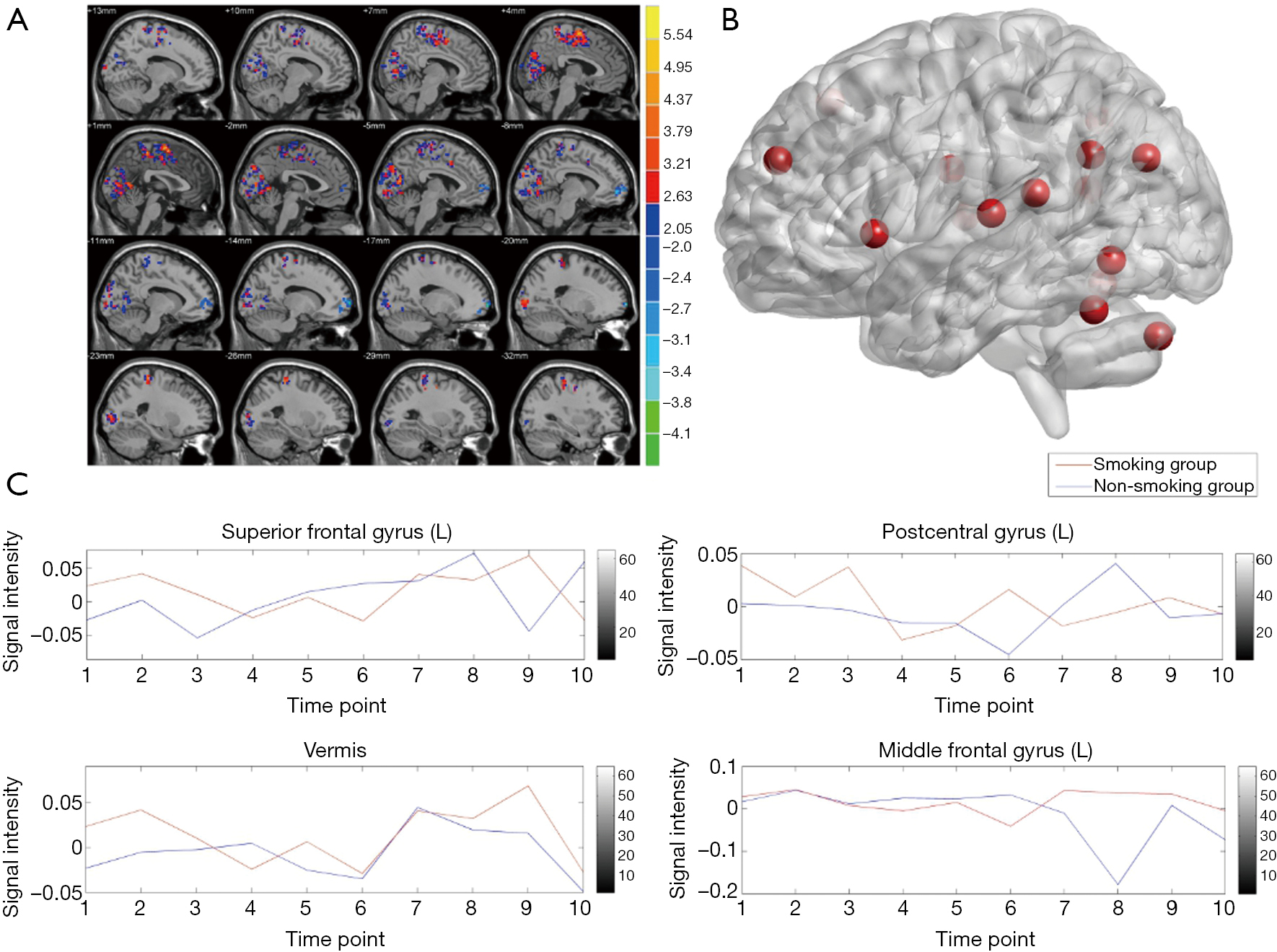 fALFF before and after acupuncture in the smoking group 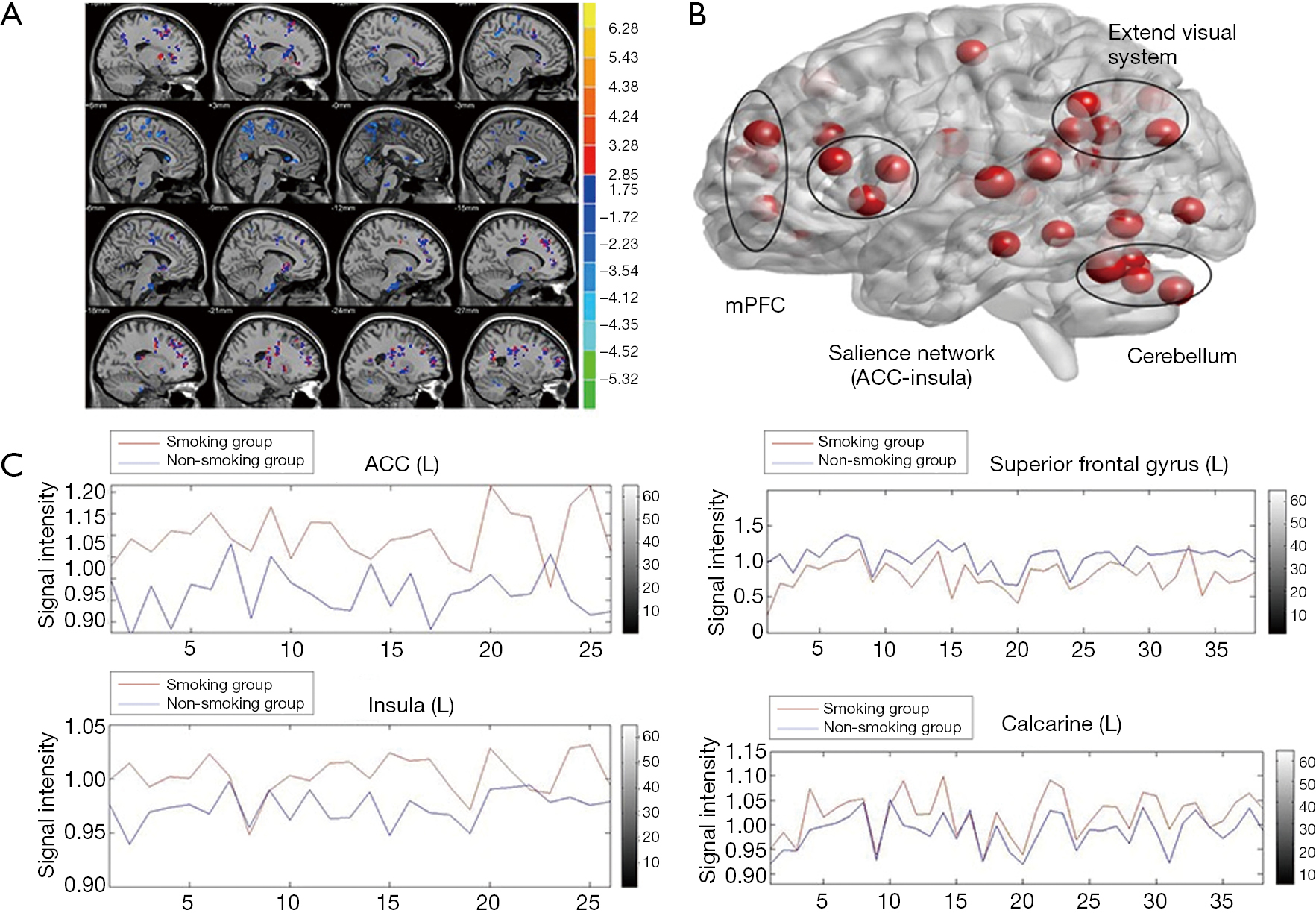 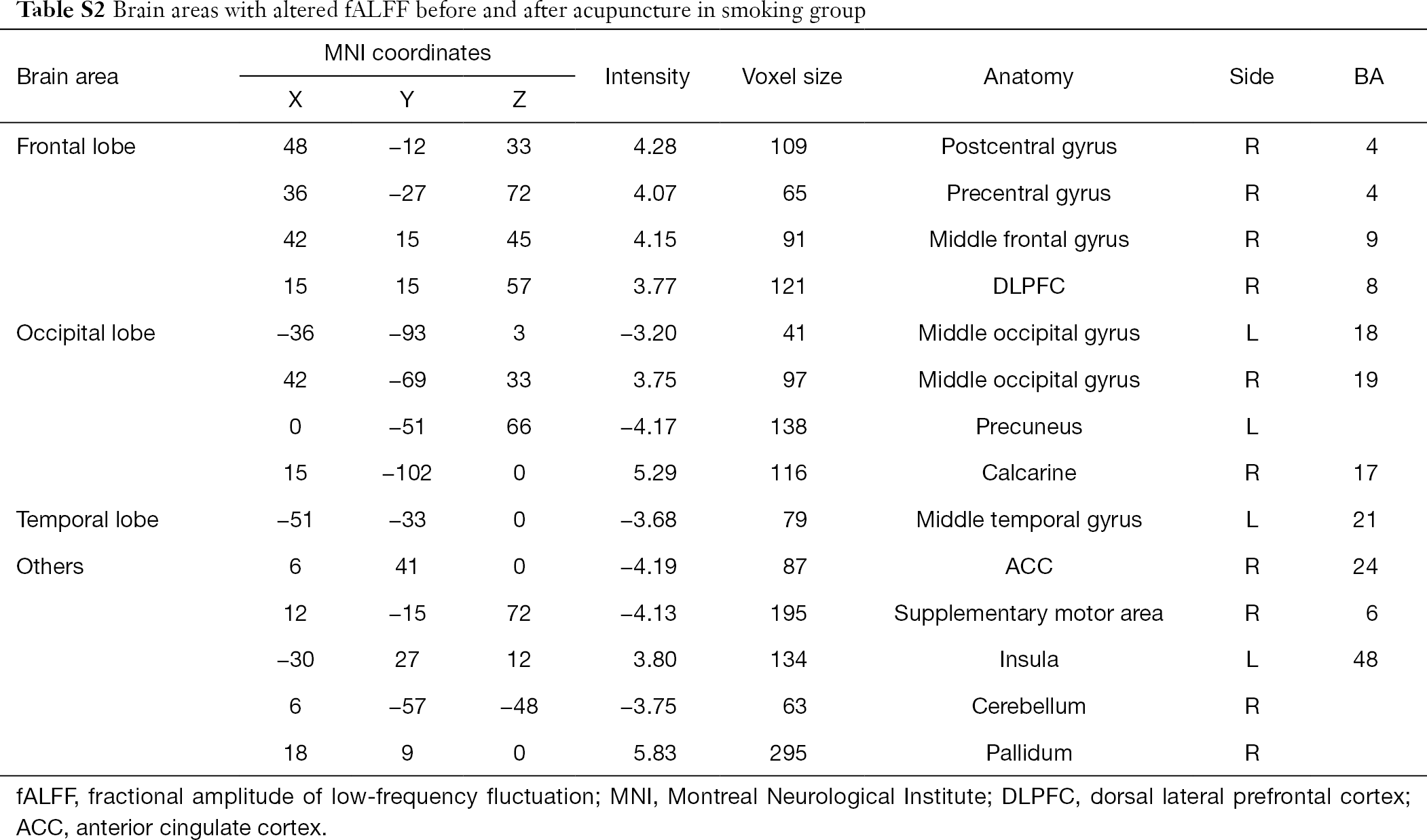 According to our knowledge, this was the first study in China to explore the neural mechanisms of acupuncture for smoking craving. The results indicated that the immediate effects of acupuncture on smoking craving were significant and identified ACC, insula, PFC, visual cortex, and cerebellum as key brains area. Consistent with the previous study, these changes might be related to decreasing salience of smoking and increasing the ability to resist the craving, respectively.

Nicotine-addicted individuals are known to exhibit deficits in central neural systems. A review by Jasinska (13) summarized that nicotine had a dual action in the brain: it promoted addiction, and it modulated cognition. Nicotine’s role in addiction was associated primarily with mesolimbic DA pathways connecting the VTA with the amygdala, whereas its effect on cognition was mediated by the mesocortical DA pathways connecting the VTA with the cortical regions. From the anatomical and fMRI evidence, ACC was the final projections of the mesocorticolimbic dopamine system and was known to control the urge to smoke (14). The insula played a critical role in tobacco dependence. Smokers with damage to insula were reported to more likely to quit and remain abstinent (15). More importantly, salience network (SN) (16), consisted of ACC and insula, was a switch between default mode network (DMN) and central executive network (CEN), and was thought to facilitate the processing of relevant stimuli arising from internal or external sources. Furthermore, the results showed that MNWS scores in the smoking group were negatively correlated with the fALFF in the insula and positively correlated with fALFF in the ACC. As such, on the contrary to our hypothesis that acupuncture might relieve the smoking craving through regulation on the reward system, we speculated the immediate effects of acupuncture on smoking craving was to improve the cognition function through ACC and insula circuit, leading to better executive function and impulsivity control.

Apart from ACC and insula of SN, PFC, which covers the front part of the frontal lobe, was prominent in addictive behavior, and was considered as the command and control center of brain (17); and it was implicated in decision making and planning selection, which may contribute to withdrawal symptoms, tobacco craving, and cognitive impairments. This was consistent with our results, indicating that smokers with 24-h abstinence had impaired execution function and impulsivity control. Unlike cue-reactivity fMRI studies, no obvious smoking cues were provided during our study. However, smokers with 24-h abstinence still showed vision-related activity in the brain (calcarine and cuneus). The reasons may be the increased allocation of attention to the smoking signal due to smoking withdrawal. Also, the cerebellum is one of the brain areas of NAChRs in the brain (18). In the present study, the activity of cerebellar nerve in the smoking group was reduced after acupuncture. This might show that the regulation of acupuncture on cerebellum is one of the critical neurological points for the basis of acupuncture for stopping smoking.

The strengths of our study included biochemical verification of smoking status, verified acupuncture treatment procedure, and resting-state fMRI design. Firstly, we used biochemical verification in this study not only because it was highly specific, simple and relatively inexpensive (19), but also it guaranteed 24 h-abstinence from smoking so the effects of acupuncture on smoking craving could be investigated. Secondly, the acupuncture treatment adopted in this study was built on our previous literature research (4) and clinical studies (5,6). Lastly, acupuncture could induce sustained effects or even after needling manipulation being suspended (20), and the neural responses to acupuncture stimulation have carryover effects. In consideration of these characteristics, although task state was used as a classical method of acupuncture research, this study applied a resting-state type to simplify the fMRI protocol, avoid head movement during the scan period and accurately collect the data.

Our study had several limitations. Firstly, our study only investigated the short-term mechanism of acupuncture on smoking craving so the result might not reflect the overall efficacy of acupuncture. Secondly, the relatively small sample size was another limitation. Thirdly, the participants were mainly male, and the effects on female were still unclear. Finally, fMRI was an indirect method to measure blood oxygen saturation and the changes in blood flow, which could not directly display the function of nerve activity.

Funding: This paper is supported by the Special Scientific Research Fund of Traditional Chinese Medicine of China (Project No. 201307014) and the Fundamental Research Funds for National Natural Science Foundation of China (81774433).

Ethical Statement: The study was approved by the China Ethics Committee of Registering Clinical Trials (ChiECTCT-2013014) and registered in the Chinese Clinical Trial Registry (ChiCTR-TRC-13003544). All the participants signed the consent forms after informing the purpose and protocol of this study.