Ankylosing spondylitis (AS) is a chronic inflammatory disease which mainly affects the sacroiliac joints (SIJs), the axial skeleton, and peripheral joints, leading eventually to spinal deformity and stiffness (1). The SIJ is the most frequently involved location presenting symptoms with low back pain (2). The major treatment target is to reach remission or low disease activity in a treat-to-target strategy (3,4). Anti-tumor necrosis factor (TNF) agents have produced significant improvement of signs and symptoms in AS patients in numerous randomized clinical trials (5-7). However, in cases with patients with long periods of remission, severe or repetitive infections, or who are preparing for pregnancy or surgery, discontinuation of anti-TNF treatment may become necessary. Clinical trials indicate that discontinuation of anti-TNF therapy could lead to rapid relapse in almost all AS patients after several weeks or a few months (8-12). However, the literature is unclear as to the reason of relapse. Baraliakos et al. found that spinal inflammation was still existent in AS patients confirmed by MRI after administration of etanercept for 2 years, suggesting spinal inflammation may be the reason for relapse (13). Recurrence may be associated with the latent inflammation in the SIJ, so detecting the inflammation in the SIJ may be helpful in predicting relapse.

To our knowledge, nothing is known about the imaging tools predictive of relapse after discontinuation of anti-TNF therapy in AS patients. The most commonly used imaging techniques in the SIJ are conventional radiography, computed tomography (CT), and magnetic resonance imaging (MRI). Conventional radiography and CT only show structural damages of the SIJ, but cannot detect the existence of inflammation (14). MRI may be helpful in detecting inflammation but is relatively costly and time-consuming (15). Color Doppler ultrasonography (CDUS) allows for detection of abnormal vascularization in the SIJ (16), and plays a certain role in early diagnosis, disease monitoring, and prognosis evaluation (17-19). However, in spite of these promising results, it is sometimes difficult to detect any vascularization of the affected SIJ due to the deep location, small-size vessels, and/or low velocity blood flow. Thus, the use of contrast-enhanced ultrasonography (CEUS) may improve the detection of vascularization of sacroiliitis and help in recognizing the latent inflammation (20,21).

The purpose of this study was to investigate the value of CEUS both in improving the detection of vascularization of sacroiliitis in AS patients in remission and in predicting relapse after drug withdrawal in patients with AS.

This was a prospective observational study. A total of 130 SIJs in 65 patients between January 2014 and October 2018 were examined. This study was approved by the Ethical Committee of Peking University People’s Hospital. All patients gave their written informed consent.

The inclusion criteria were as follows: (I) age ≥18 years old; (II) patients fulfilling the modified New York criteria for the diagnosis of AS (22); (III) continuous and stable treatment with anti-TNFs for the last 6 months; (IV) patients achieving Ankylosing Spondylitis Disease Activity Score (ASDAS) inactive disease criteria (defined as <1.3) after discontinuation of anti-TNF therapy (23).

Exclusion criteria included the following: (I) spinal immobility on clinical examination and bony ankylosis by imaging technique; (II) past or present rheumatoid arthritis and other causes of arthritis; (III) current active tuberculosis or a history of active tuberculosis; (IV) contraindications for the application of SonoVue (Bracco, Milan, Italy) such as hypersensitivity to sulfur hexafluoride; (V) cardiac and pulmonary diseases; and (VI) pregnancy and breastfeeding.

Clinical data at the time of anti-TNF withdrawal were collected, including age, sex, disease duration, HLA-B27, Bath Ankylosing Spondylitis Disease Activity Index (BASDAI), erythrocyte sedimentation rate (ESR) (by the Westergren method), and C-reactive protein (CRP) (by nephelometry). All patients had a maximum follow-up of 52 weeks and completed the study when experiencing relapse or maintaining remission of 52 weeks. Relapse was recorded either on telephone visit or outpatient visit at any time if symptoms suggestive of relapse or other problems occurred, and if they did, their clinical symptoms were documented accordingly. Relapse was defined as an increase of two or more items in comparison with the BASDAI at the time of anti-TNF withdrawal (24).

An ACUSON S3000 Ultrasound System (Siemens Medical Solutions, Mountain View, CA, USA) and a My Lab 90 Ultrasound System (Esaote Biomedica, Genoa, Italy) with 4–6 MHz convex array transducer were used, operating at a pulse repetition frequency of 1.3 kHz, a color-mode frequency of 2.8 MHz, and low wall filters (125 Hz) which remained fixed throughout the study. The color Doppler gain was optimized by increasing gain until first noise appeared and then reducing gain just enough to suppress the noise. The color box was restricted to the area of the SIJ.

With the patient lying in the prone position, the probe was first oriented transversely at the sacral bone. It was inclined downward to identify the SIJ. The transducer was then turned counterclockwise to reveal the left SIJ and clockwise to reveal the right SIJ. We observed the blood flow in the area of the SIJ by CDUS after each SIJ was visualized. We selected the blood flow signal in the SIJ for the spectral measurement if the blood flow signal could be found both within and around the SIJ. If the arterial blood flow was detected, the resistive index (RI) was measured 3 times, reaching the mean value. Based on our previous research (25), we defined no blood flow, high RI of arterial blood flow (RI ≥0.7), the reversed phase in the diastolic phase or venous blood flow in the bilateral SIJs as negative CDUS; meanwhile, low RI of arterial blood flow (RI <0.7) in the unilateral or bilateral SIJs was defined as positive CDUS.

First, a bolus of 1.2 mL agent (SonoVue®) was injected intravenously, and the pipe was immediately washed with 5 mL saline water. At the same time, we started the contrast-enhanced mode for timing and observed the process of blood perfusion in both SIJs continuously and dynamically. After developing of the SIJ, color Doppler and spectral Doppler were used to measure RI. The definitions of positive CEUS and negative CEUS were the same as above.

All the ultrasonographic images, including static and dynamic types, were stored on a disk for each patient. All the examinations were performed by the same ultrasonographer who had more than 5 years of experience in musculoskeletal ultrasound.

The Chi-squared test was adopted to compare CDUS with CEUS in AS patients with remission after discontinuation of anti-TNFs. The differences of CEUS for the patients in remission were compared with those for the patients of relapse. A Kaplan-Meier survival analysis was used to calculate the probability of relapse with the duration of remission as survival time and relapse as a binomial covariate for the end point. A Cox proportional hazards regression analysis was exploited to identify possible factors predictive of relapse. P values ≤0.05 were considered statistically significant. In addition, patients were grouped according to the different results of both CDUS and CEUS at the time of discontinuation. The time to relapse in these three groups was compared using a log-rank test. 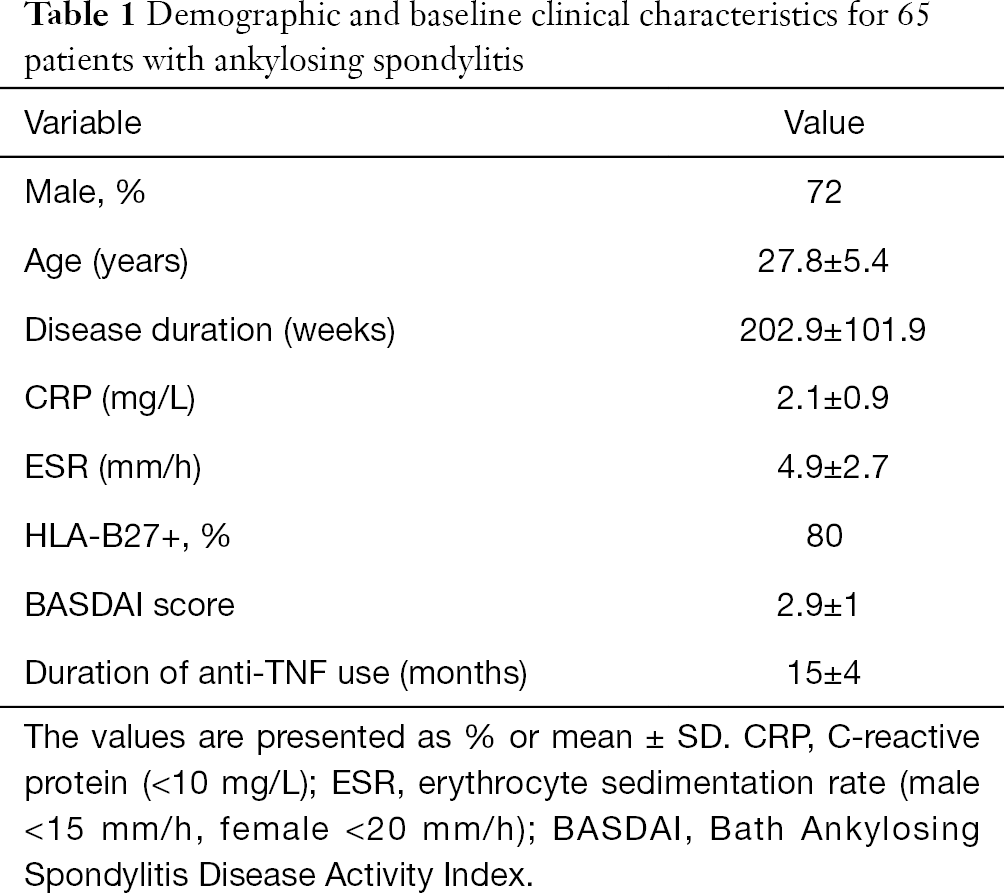 There were three result types of the CDUS and CEUS examinations: positive CDUS and CEUS, negative CDUS and CEUS, and negative CDUS but positive CEUS (Figure 1). After discontinuation of anti-TNF therapy, positive CEUS accounted for 61.5%; this was significantly more than positive CDUS (13.8%) (Table 2). The vascularization detected by CEUS for patients of relapse was significantly different from that of patients with remission (P<0.05). Between the time of withdrawal and relapse, the mean increase of the BASDAI, CRP, and ESR were 3.8 (±1.6), 14.6 mg/L (±21.2 mg/L), and 20.1 mm/h (±28.5 mm/h) respectively. All changes between the time of withdrawal and relapse were statistically significant. The changes in the BASDAI, CRP, and ESR correlated well with the positive CEUS results (P<0.05). 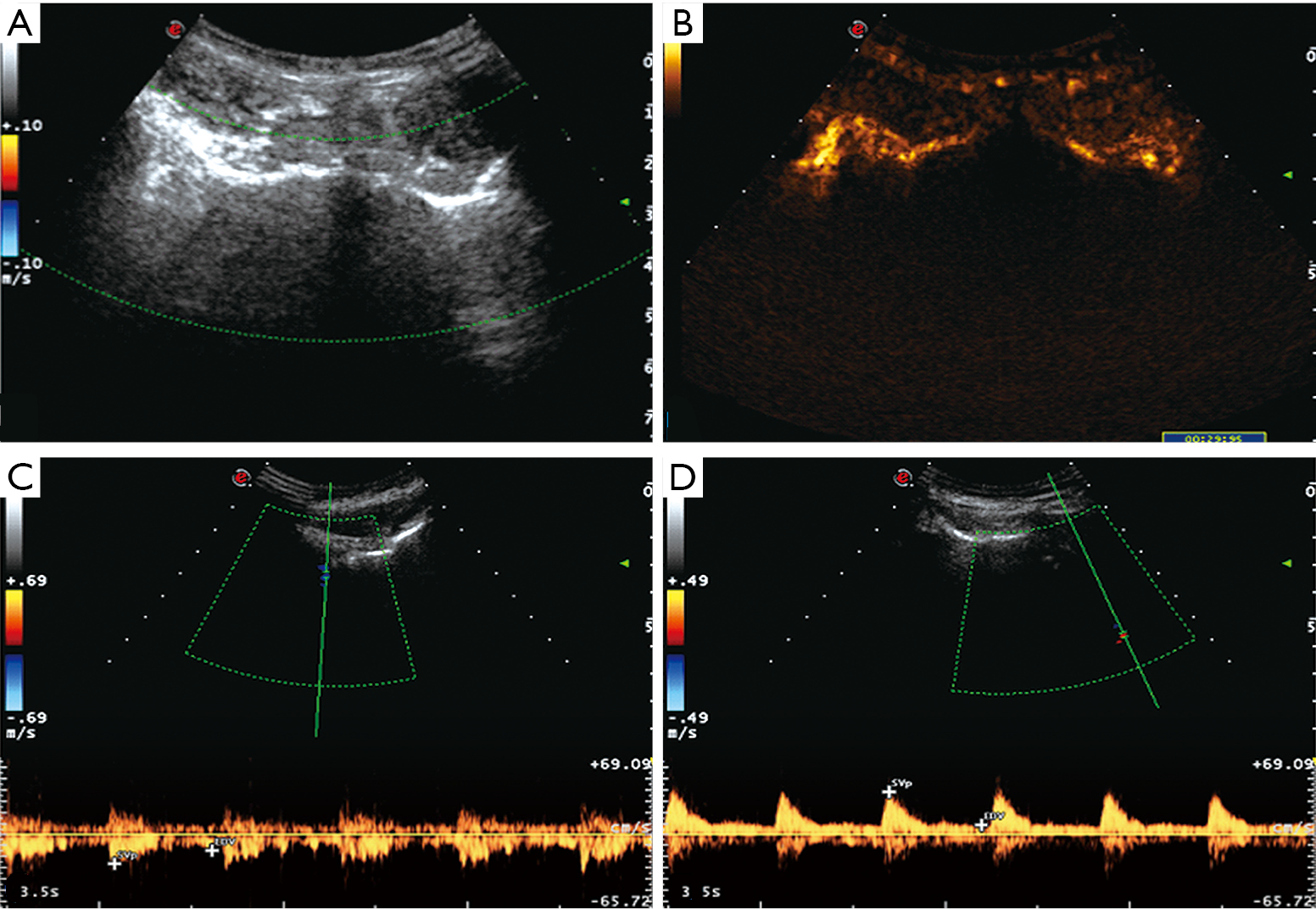 Table 2 The results of CDUS and CEUS examinations
Full table 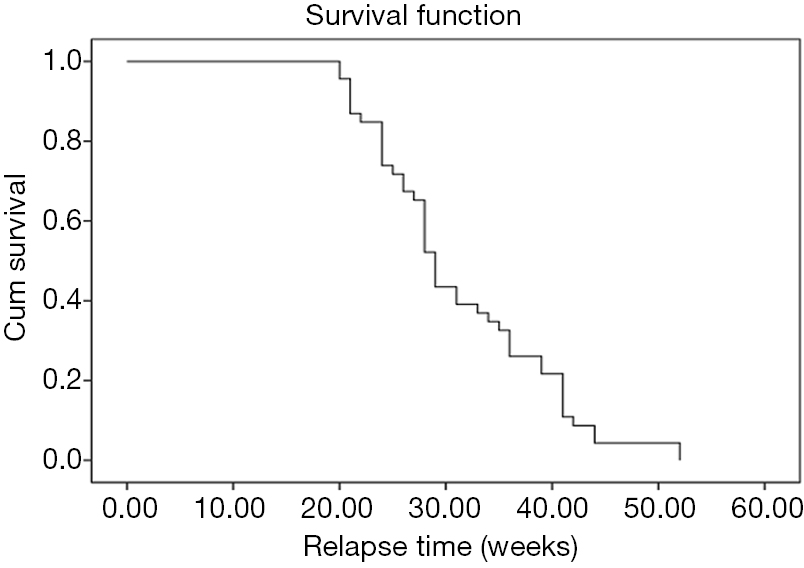 Figure 2 Kaplan-Meier curve of time to relapse in 65 patients with AS after discontinuation of anti-TNF therapy. AS, ankylosing spondylitis; TNF, tumor necrosis factor. 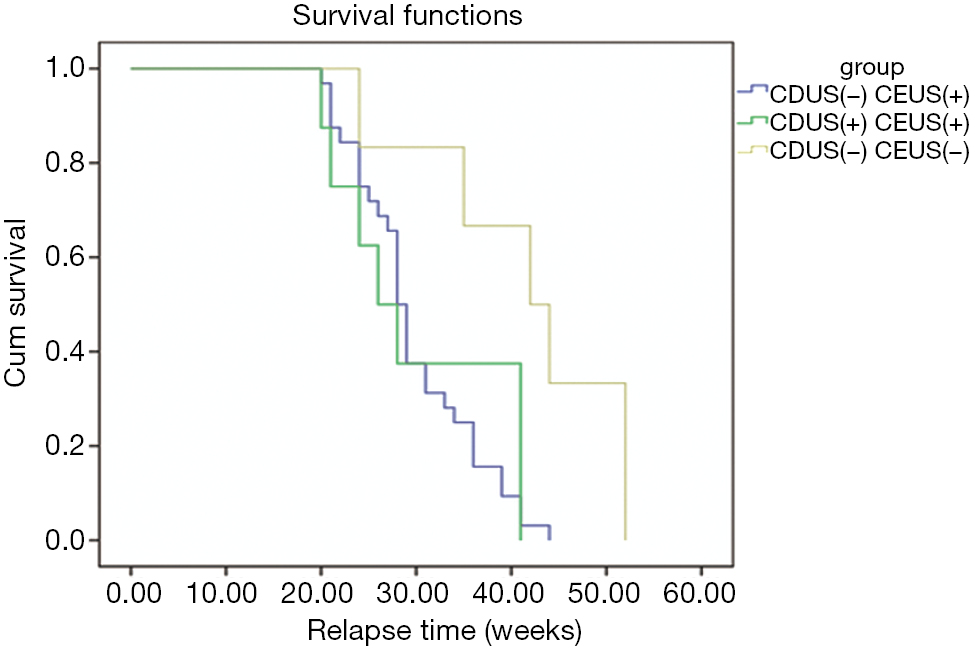 The prevalence rate of AS reported is different between countries and ethnicities, but for the Chinese population, the rate is about 0.20–0.54% (26). More than 95% of AS patients have SIJs involved, so the diagnosis of sacroiliitis appears to be very important. The salient features of sacroiliitis are neovascularization, inflammatory infiltration, and intra-articular fluid collection (27). Both ESR and CRP are not very specific in reflecting the inflammation condition (28). MRI might be helpful to detect sacroiliitis through subchondral bone marrow edema (29), but is time-consuming, costly, and limited in patients with contraindications such as metal implants, pacemakers, or claustrophobia. A few previous studies have reported that the vascularization of the SIJ could be revealed by CDUS (17,18). Furthermore, Klauser et al. reported that CEUS had high negative predictive value in the detection of inflamed SIJs for ultrasound contrast agents making the detection of small vessels and slow blood flow possible by increasing the signal-to-noise ratio (20). In our study, we were able to detect more vessels in the SIJ by using CEUS and thus this research supports the thesis put forth by Klauser et al. which states that CEUS can increase the detection of even minor perfusion (20).

The most prominent feature of our study was that we used CEUS to predict relapse of patients with AS in remission after discontinuation of anti-TNF therapy. To the best of our knowledge, there have been no studies that have predicted relapse of AS after discontinuation of anti-TNF therapy through CEUS thus far. The use of CEUS in the early detection of patients in remission could be necessary to some extent to direct the clinician’s choice concerning a retreatment regimen and prevent relapse of the disease. To be honest, although CEUS for the further assessment of the degree of vascularization and for treatment monitoring in joints is an active research field, at present, it cannot be recommended for routine clinical use (35).

All patients enrolled in our study fulfilled the 1984 modified New York criteria for the diagnosis of AS in which radiologic sacroiliitis criterion is an essential prerequisite which makes it possible to detect abnormal ultrasonic manifestation in the SIJ. However, patients with peripheral spondyloarthropathy may have no abnormal imaging manifestation in the SIJ. Therefore, in our future research, we could investigate the ultrasonic manifestations of peripheral arthritis, enthesitis, dactylitis, and synovial and tendon involvement to predict relapse (36-38).

There were several limitations to our study. Firstly, the examinations of CDUS and CEUS were performed by a single sonographer. Secondly, there were no comparisons made with a more standard method like MRI, and this was based on a few reasons. One reason is that some of our patients have a poor economic foundation and cannot afford the expense of MRI examination. Another reason is due to contraindications of MRI examination such as metal implants, pacemakers, or claustrophobia. This is a significant limit in our study. Further investigations are needed to overcome these limitations.

In conclusion, the vascularization in the SIJ could be improved by micro-bubble contrast agents compared with CDUS. CEUS is a safe and highly practical technique for the prediction of relapse in patients with AS after discontinuation of anti-TNF therapy.

Ethical Statement: This study was approved by the Ethical Committee of Peking University People’s Hospital. All patients gave their written informed consent.