Paranasal sinusitis is an inflammation of the mucosal lining of the paranasal sinuses (PNS) and is a common clinical problem in general populations (1). The sinusitis is diagnosed by the opacification of the sinuses and air/fluid level best seen in the Waters’ view of X-ray imaging or computed tomography (CT). Because CT is not routinely indicated in all patients with possible sinusitis, X-ray is still initially used for its diagnosis. However, there are several limitations to using PNS X-ray scans as a diagnostic tool. On plain radiographs, other facial bony structures overlap the sinuses, and the rate of false-negative results is high (2,3). Furthermore, the posterior ethmoids are poorly visualized, and the ostiomeatal complex cannot be adequately assessed. Therefore, it is difficult to visualize these characteristics to discriminate sinusitis from normal cases.

Deep learning algorithms through millions of data points to find patterns and correlations that often go unnoticed by human experts. These unnoticed features can produce unexpected results. Particularly in the case of deep learning-based disease diagnosis with medical images, it is important to evaluate not only the accuracy of the image classification but also the features used by the model, such as the location and shape of the lesion. However, one of the limitations is that there is a lack of transparency in deep learning systems, known as the “black box” problem. Without an understanding of the reasoning process to evaluate the results produced by deep learning systems, clinicians may find it difficult to confirm the diagnosis with confidence.

The objective of this study to investigate the ability of multiple deep learning models to recognize the features of maxillary sinusitis in PNS X-ray images and to propose the most effective method of determining a reasonable consensus.

Our institutional review board approved this retrospective study and waived the requirements for informed consent due to the retrospective study design and the use of anonymized patient imaging data. We included records from January 2014 to December 2017 for the internal dataset and from January 2018 to May 2018 for the external test dataset. A total of 4,860 subjects for the internal dataset, which included 2,430 normal and sinusitis subjects each, and 160 subjects for the external test dataset (temporal test dataset), which included 80 normal and sinusitis subjects each, underwent PNS X-ray imaging using Waters’ view. The temporal test dataset included newly collected data from subjects with a 1-year examination interval. The temporal test dataset was used to evaluate objective performance to ensure that the accuracy of the data for a specific period is not represented. If an image of the same subject that repeatedly scanned is included in the same dataset, it can affect the results with underestimate or, conversely too low. All X-ray images were compared with PNS CT as the reference standard for sinusitis of deep learning. After reviewing the imaging database, including the PNS X-ray images, 60 subjects were excluded because of artifact caused by sinus surgery (n=23), fracture (n=7), cyst or mass (n=15), severe movement (n=10), and incorrect scanning (n=5). To prevent overfitting, we conserved as many images as possible, including those with appropriate artifacts.

The pre-processing steps were conducted with resizing, patch, and augmentation steps. The first pre-processing step normalizes the size of the input images. Almost all the radiographs were rectangles of different heights and too large (median value of matrix size ≥1,800). Accordingly, we resized all images to a standardized 224×224 pixel square, through a combination of preserving their aspect ratios and using zero-padding. The investigation of deep learning efficiency depends on the input data; therefore, in the second processing step, input images were pre-processed by using a patch (a cropped part of each image). A patch was extracted using a bounding box so that it contained sufficient maxillary sinus segmentation for analysis. Finally, data augmentation was conducted for just the training dataset, using mirror images that were reversed left to right and rotated −30, −10, 10, and 30 degrees. Figure 1 shows a representation of PNS X-ray images in the pre-processing step described above.

All subjects were independently labeled twice as “normal” or “sinusitis” by two radiologists. Labeling was first evaluated with the original images on a picture archiving communication system (PACS) and secondly with the resized images that were used for the actual learning data. Datasets were defined as the internal dataset and temporal dataset, with the temporal dataset used to evaluate the test.

Figure 2 Representation of the process steps for the majority decision algorithm.

Statistical analysis of reproducibility for labeling and the AUC of the ROC curve was performed using MedCalc software (www.medcalc.org, Ostend, Belgium).

The reproducibility of the sinusitis labeling showed excellent agreement based on the two radiologists’ evaluations (kappa value >0.85).

Performance evaluation to recognize the features of sinusitis

The majority decision algorithm was shown to be significantly more accurate at lesion detection compared with the individual CNN models, and the activated features of sinusitis were visually confirmed to be closely correlated with the features evaluated by the radiologists using PNS X-ray images.

Performance evaluation to recognize the features of normal 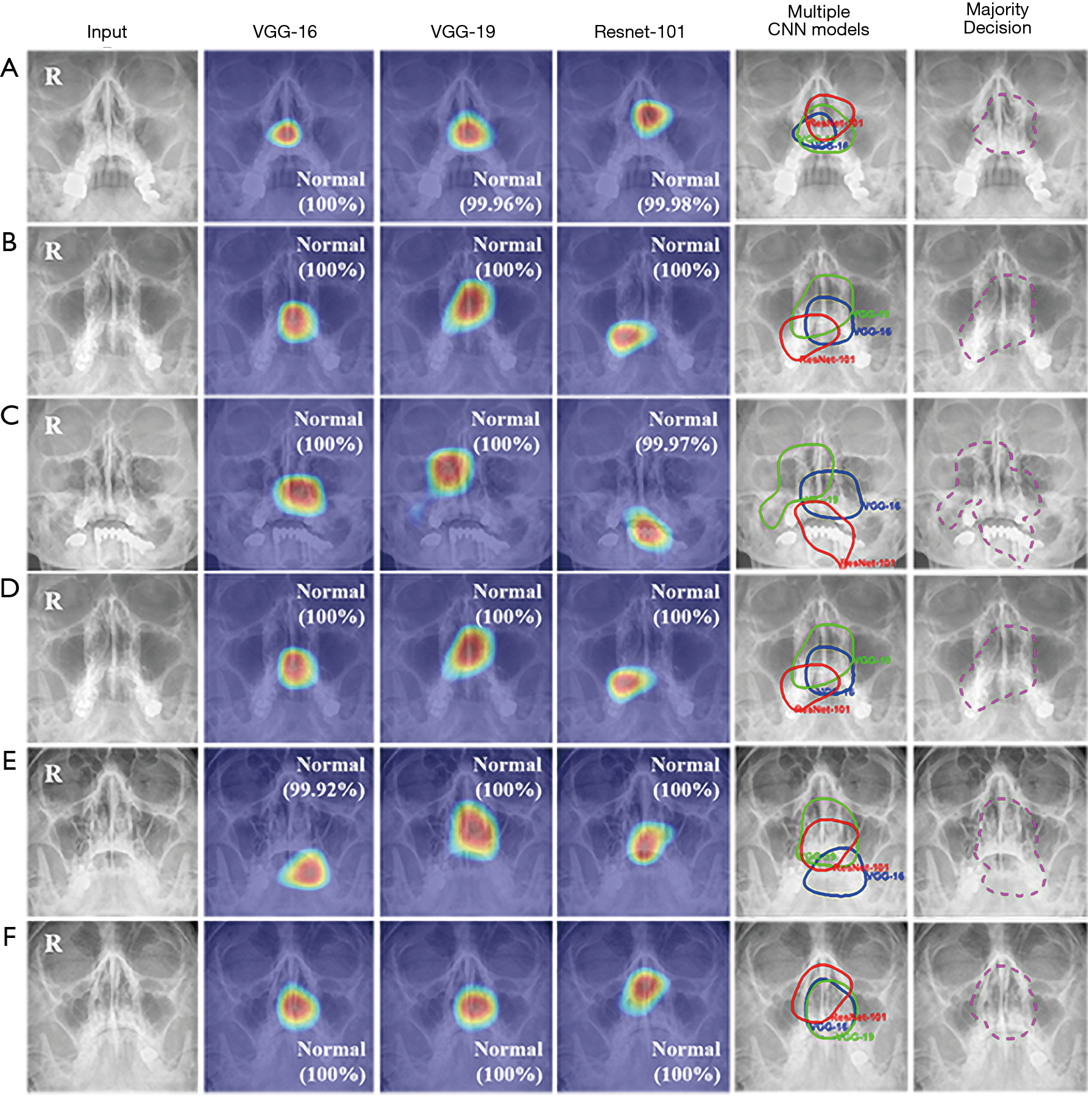 Figure 5 Performance evaluation to recognize the features of normal subjects for each CNN model and the majority decision algorithm. Internal test dataset (A, B, and C) and temporal test dataset subjects (D, E, and F). CNN, convolutional neural network.

The VGG-16, VGG-19, and ResNet-101 models detected features of normal subjects using activation maps. Multiple CNN models were analyzed using the union methods from each activated map. In the case of normal subjects, nasal septal area, midline portion of the maxillary sinus, was activated. All models, including the majority decision algorithm, were evaluated as ‘normal’ with high accuracy.

In this study, image resizing, patch extraction, and rotation for data argumentation were performed as preprocessing steps (Figure 1). Using patched images is an efficient method to detect lesions accurately as well as to achieve high classification accuracy in medical images (16). Image rotation was performed only within −30 to 30 degrees of the original images from the training dataset. Data argumentation has the advantage of improving the learning power, but learning that includes unnecessary data is meaningless. For example, the angle of rotation for data augmentation is also significant in the evaluation of an actual image and is determined by the range of head movements in the actual PNS X-ray scan. In this study, the angle of rotation was limited to ±30 degrees for that reason. If images with 90- or 180-degree rotations are used for learning, the wrong features might be activated. This is because a feature from a region that is not in the position of the actual maxillary sinus can be learned incorrectly, due to rotation angle being too large.

A review of the activation map in the test datasets for each model showed that the VGG-16 and VGG-19 models detected a relatively larger area than the actual lesion. Conversely, the ResNet-101 model detected a relatively smaller region than actual lesion, but it could also detect a lesion that was missed by the VGG-16 or VGG-19 models. The majority decision algorithm was shown to be effective in making a reasonable decision by compensating for the advantages and disadvantages of each deep learning model.

As a result of reviewing the classification accuracy with an activation map for normal subjects, a normal feature recognized the surrounding regions, not the maxillary sinus region (Figure 5). The reason is shown that CNN models recognize the differences in the characteristics between normal and sinusitis as a major feature of relatively bright signal intensity in the maxillary sinus. Previous papers showed only abnormal cases with a heat map; however, our study wants to secure reliability by showing the normal cases with multiple algorithms.

The selection criteria for the multiple CNN models included a high accuracy of classification and activation maps of the lesions. In addition to the VGG and ResNet models used in this study, to select multiple CNN models, Alexnet (17) and GoogleNet (18) were also evaluated for performance. However, the Alexnet and GoogleNet models were found to have less than a 90% ACC for classification, and they did not detect the sinusitis features. By contrast, the VGG and ResNet models showed reasonable feature extraction for sinusitis. One of the reasons for this difference is the kernel size that is used to extract features in an image.

The VGG-16 and VGG-19 architecture consist of large kernel-size filters with multiple 3×3 kernel-size filters, one after another. Within a given receptive field (the effective area size of an input image on which output depends), multiple stacked smaller sized kernels are better than a single larger sized kernel because multiple non-linear layers increase the depth of the network, enabling it to learn more complex features at a lower cost. As a result, the 3×3 kernels in the VGG architecture help to retain more fine details of an image (10). The ResNet architecture is similar to the VGG model, consisting mostly of 3×3 filters. Additionally, the ResNet model has a network depth of as large as 152. Therefore, it achieves better accuracy than VGG and GoogleNet, while being computationally more efficient than VGG (11). While the VGG and ResNet models achieve phenomenal accuracy, their deployment on even the most modest sized GPUs is a problem because of the massive computational requirements, both in terms of memory and time.

There are several limitations to this study. First, the external test dataset in multiple medical centers did not be included for reproducibility. In the case of X-ray equipment, there is a relatively small difference in performance compared to other medical imaging equipment, depending on the manufacturer or model. In this study, therefore, the external test dataset in other medical centers did not be included. In the case of a local medical center using relatively old equipment; however, an additional performance evaluation is also required to utilize artificial intelligence (AI) assistive software. Second, the proposed majority decision algorithm was optimized to evaluate only maxillary sinusitis. Therefore, there is a limitation to evaluate sinusitis in frontal, ethmoid, and sphenoid. In order to utilize AI based assistive software in the future, further study is underway because it is necessary to evaluate sinusitis at other locations as well as maxillary. Third, it lacks pattern recognition and representation methods that can solve black-box in deep learning. It needs to determine a reasonable consensus for solving the black-box problem. The feature recognition based activation map was used to solve the black-box problem in deep learning. As it can be shown from the results, not only classification but also lesion localization can be expressed as a result. It helps medical doctors make a reasonable inference about the deep learning analysis. However, it is not enough to understand all deep leaning procedures. For example, it is difficult to understand the pattern of each learned CNN model. By understanding the pattern recognition capabilities of each model, we can understand the advantages and disadvantages of each model and achieve the optimization of the overall AI system. To overcome this limitation, a feature connectivity representation should be available for each layer to determine which feature weights are strong (19). In addition to feature representation, text-based description algorithm can be applied to overcome the black-box limitation in a medical application using the convolutional recurrent neural network (CRNN) that is the combination CNN and recurrent neural network (RNN) (20,21).

The authors thank the ReadBrain Co., Ltd for consulting of deep learning analyses. All authors declare no competing interests with the company.