Kidney transplantation (KTx) is the preferred treatment for virtually all suitable candidates with end-stage renal disease (ESRD) (1). Compared to dialysis, KTx improves both survival and quality of the life of the patients. In patients following successful KTx, leading causes of death are cardiovascular diseases (CVDs) (1). Theoretically, early detection of CVD-related alterations in myocardial mechanics could help in the selection of high-risk patients. Echocardiography is a widely used method of choice in assessing different cardiac functions (2). Three-dimensional (3D) speckle-tracking echocardiography (3DSTE) has the ability to perform non-invasive 3D evaluation of cardiac mechanics including left ventricular (LV) volumetric, strain and rotational analysis at the same time from the same digitally stored dataset (3). The net difference between LV apical and basal rotations called as LV twist is considered to be a significant part of LV function (4,5). 3DSTE has been validated for quantitative assessment of LV twist (3). There is limited information on LV rotational mechanics post-KTx, therefore the present study aimed to assess it and to compare it to that of age- and gender-matched healthy controls.

The present study comprised 42 KTx patients, from which 4 patients were excluded due to insufficient image quality (mean age: 46.3±8.2 years, 29 males). All patients were sent from the KTx Unit at the Department of Surgery, University of Szeged minimum one year after the operation. The control group consisted of 81 age- and gender-matched healthy individuals (mean age: 43.5±10.8 years, 51 males). None of the healthy subjects and KTx patients had chest pain, other cardiovascular symptoms or previous myocardial infarction. None of KTx patients received anti-rejection therapy. All KTx patients and healthy controls successfully underwent transthoracic two-dimensional (2D) Doppler echocardiography extended with 3DSTE at the same time. The institution’s human research committee approved the study, which also complied with the ethical guidelines set by the 1975 Declaration of Helsinki. All patients gave informed consent. The present study is part of the MAGYAR-Path Study (Motion Analysis of the heart and Great vessels bY three-dimensionAl speckle-tRacking echocardiography in Pathological cases), which aimed to examine pathophysiological consequences of different pathological states on myocardial mechanics among others (‘magyar’ means ‘Hungarian’ in Hungarian language).

In some cases, LV basal and apical rotations were in the same direction called as LV ‘rigid body rotation’ (RBR) (6). In these subjects, proper LV twist data could not be gathered, therefore apicobasal gradient defined as end-systolic LV apical minus LV basal rotation was calculated (Figure 1).

All data are reported as mean ± standard deviation. Statistical significance was considered if P<0.05. Categorical variables were assessed by Fisher’s exact test. Shapiro-Wilks test was used to test normal distribution in every dataset. Levene’s test for equality of variances was used for assessing homogeneity of variance. Student’s t-test was used for assessing datasets in normal distribution and Mann-Whitney-Wilcoxon test in datasets that were not normally distributed. Statistical analysis was carried out by using RStudio {RStudio Team [2015]. RStudio: Integrated Development for R. RStudio, Inc., Boston, MA, USA}. Commercially available software package was used for offline data analysis and graph creation (MATLAB 8.6, The MathWorks Inc., Natick, MA, USA. 2015).

The ratio of risk factors and most important medications applied in post-KTx patients are listed in Table 1. Significant differences could be demonstrated in LA diameter, LV end-diastolic diameter and volume, interventricular septum, LV posterior wall thickness, LV ejection fraction and early and late filling transmitral flow velocities and in their ratio between post-KTx patients and controls (Table 1). None of the control subjects and post-KTx patients showed valvular stenosis or grade 2–4 mitral and/or tricuspid regurgitations. 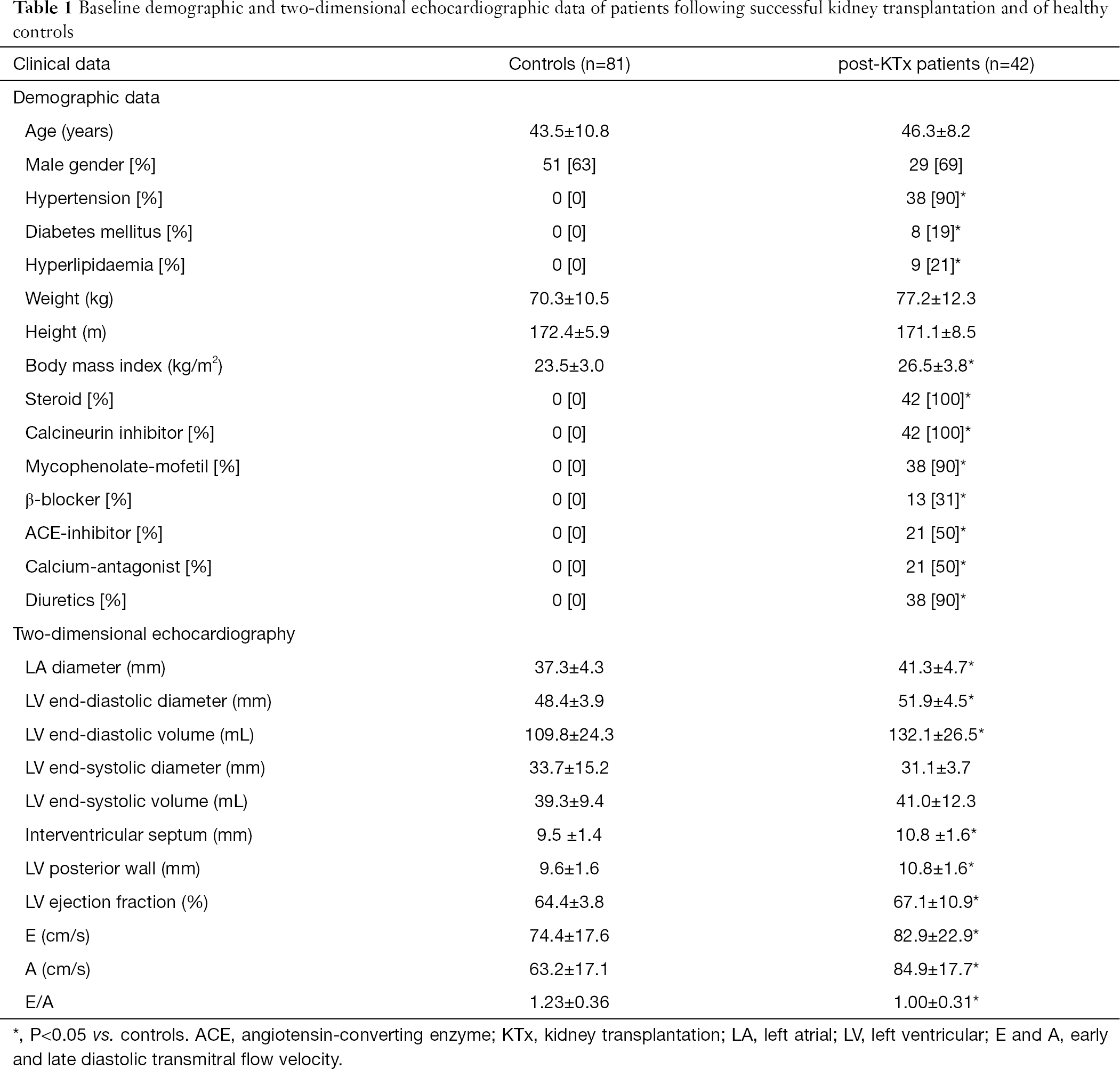 CVDs are the leading causes of morbidity and mortality in chronic kidney disease patients. KTx is the treatment modality of choice for virtually all suitable candidates with ESRD (7,8). The leading causes of death in patients who died with a functioning allograft are CVDs as well (9), which account for almost 40 percent of all deaths in this population. Studies suggest that the survival advantage of KTx may be largely attributed to the reduction in CVDs. In a retrospective analysis of the United States Renal Data System, data of 60,141 adult primary KTx recipients transplanted between 1995 and 2000 were compared with that of 66,813 adult patients on the waiting list over the same time period, Meier-Kriesche et al. have demonstrated progressive decrease in cardiovascular death rates by renal transplant vintage for both diabetic and non-diabetic recipients of both living and deceased donor transplants (10).

Diastolic dysfunction is frequently observed in ESRD, moreover, heart failure (HF) with preserved LV-EF is more common in hemodialysis patients than HF with low LV-EF (11). Hassanin et al. demonstrated that in chronic kidney disease, although longitudinal and radial systolic functions were reduced, LV-EF may remain within normal limits due to the preservation of the circumferential functions (12). KTx was found to significantly improve LV-EF and apical 4-chamber strain and to reduce LV mass index and relative wall thickness. Other variables including global longitudinal strain and diastolic dysfunction were not found to be improved significantly (13).

In a healthy subject, there are special LV rotational mechanics including smaller clockwise LV basal rotation and larger counterclockwise LV apical rotation resulting in LV twist due to two orthogonally directed LV muscle bands (4). LV twist has an essential role in maintaining LV pump function (5). However, its clinical importance is not well established in the general population, and in KTx patients either. 3DSTE-derived LV rotation and twist parameters have already been validated (14). It is known that LV twisting mechanism is affected by several conditions and disorders, but the results are conflicting (15-17). To this point, however, there is limited information on the relationship between CKD, KTx and LV rotational mechanics. According to Yildirim et al. LV rotational and twist parameters did not differ between those of predialysis and transplantation patient groups (18). In contrast, Deng et al. found that LV basal and apical rotations, average twist and torsion were higher following successful KTx as compared to pre-KTx results (19). Interestingly there was no significant difference between the absolute value of LV basal and apical rotations in this study.

The present study demonstrated reduced LV basal rotation and slight increase in LV apical rotation resulting in unchanged LV twist in KTx patients as compared to matched healthy controls. These results suggest a sort of remodelling of LV rotational mechanics in post-KTx patients. Moreover, significant LV rotational abnormalities (LV-RBR) could also be confirmed in some KTx cases due to abnormally directed LV basal rotation. Recently these sorts of LV rotational abnormalities could be detected in high ratio of patients with noncompaction cardiomyopathy (55–100%) (20,21), cardiac amyloidosis (60%) (22), acromegaly (25%) (23), but reports showed similar cases with other diseases as well. Significant apicobasal gradient (overrotation of the LV apex) suggesting a compensating mechanism could also be detected in these cases similarly to what happens during stress (24). In post-KTx patients, ESRD-related consequences could explain our findings, but the effect of surgical treatment could not be excluded either (18). Further studies are warranted to confirm our findings and to compare them to renal and other functional parameters.

Several important limitations arose during the assessments which are listed below:

KTx is associated with alterations in LV rotational mechanics with unchanged LV twist suggesting a remodelling of this sort of movement. The near absence of LV twist (RBR of the LV) could be demonstrated in some post-KTx cases.

Ethical Statement: The institution’s human research committee approved the study (ethical ID: 71/2011), which also complied with the ethical guidelines set by the 1975 Declaration of Helsinki. Written informed consent was obtained from all patients for publication of this manuscript and any accompanying images.