Elbow CT images were retrospectively selected from the picture archiving and communication system (PACS, GE Medical systems, Milwaukee, WI, USA) within our hospital over a 5-year period (January 2011 to December 2015). Patients were selected for this study if their age ranged 18 to 60, and had no previous history of elbow lesions such as a deformity, fracture and tumor. The exclusion criterion was any failure to retrieve 2D reformatted images. Our Institutional Review Board approved the protocol for the use of these scans.

We conducted image manipulation using Syngo MultiModality Workplace. The reconstructed slice width was 0.75 mm and with a reconstruction increment of 0.4 mm. For each patient, reformatted 2D CT images were used to determine the sagittal and coronal plane for measurements. The sagittal plane was defined by 3 anatomic landmarks: at the most medial point of the coronoid facet, the point at the tip of the coronoid process and at the most lateral point of lesser sigmoid notch of the proximal ulna. The maximum widths of medial and lateral facets of the coronoid process were measured in the coronal plane (Figure 1). Measurements of two facets in reference to the sagittal plane included: (I) height with respect to the line representing maximum facet height (Figure 2) and to the maximum height of diaphysis of the ulna (Figure 2); (II) the tilt angle of facet (Figure 3); and (III) the gradient angle and length of facet ridge in the middle of the coronal plane (Figures 4,5). 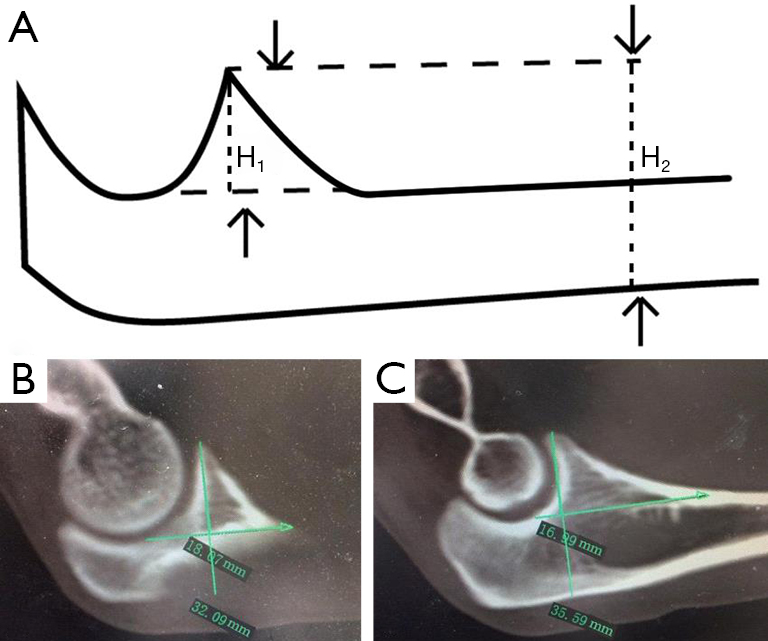 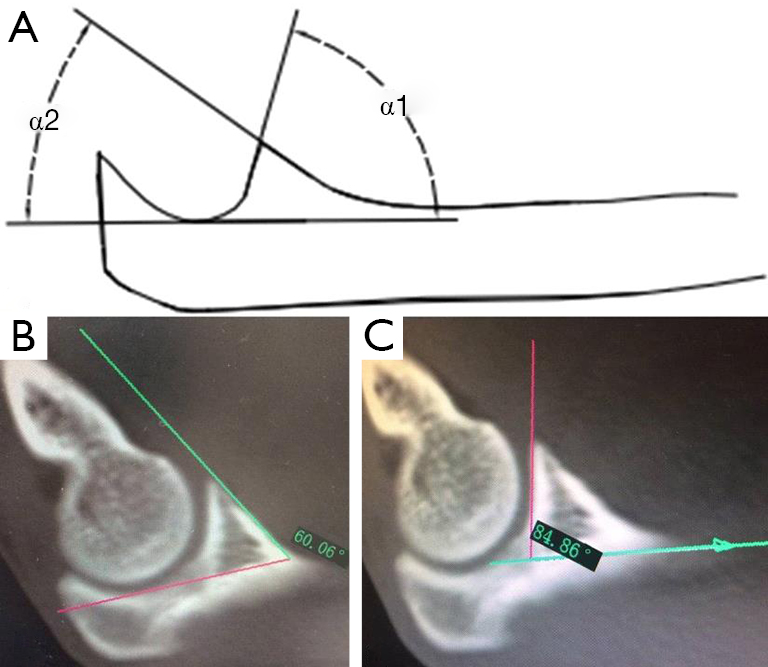 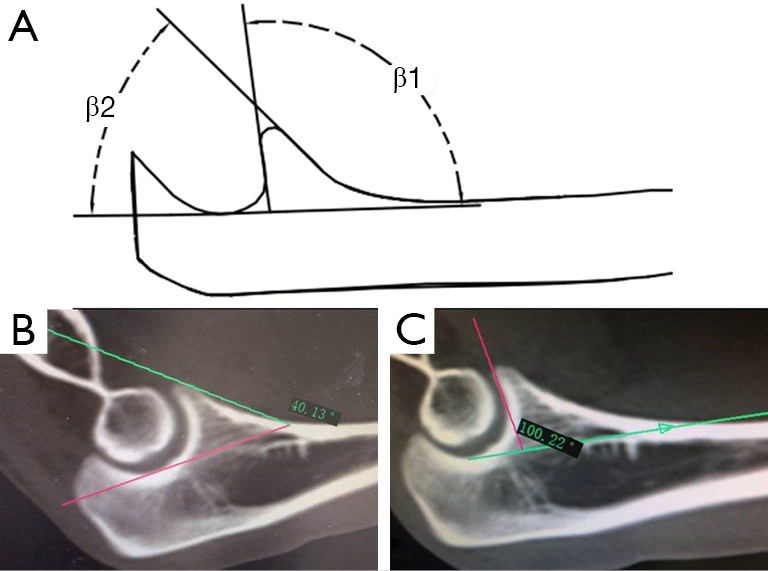 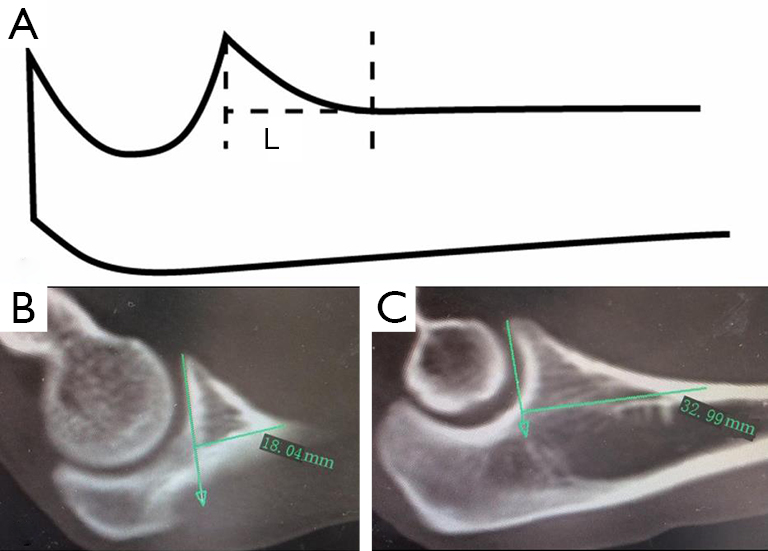 In order to avoid bias for this morphometric study, measurements of two facets of the coronoid process were performed independently by 2 observers with over 10- years experience in CT diagnosis of musculoskeletal system, with accuracy of 0.1 mm and 0.1°. The interobserver reliability was calculated. In order to evaluate intra-observer reliability, each measurer repeated the measurements after a 2-week interval. The Pearson product-moment correlation coefficient (r) was used to measure the level of intra-observer and interobserver reliability for measurements of coronoid facets. Correlations between 0.70 and 0.89 were regarded as good and r values of 0.90 or greater were considered excellent (9). Results were averaged. All measurements were compared between left and right elbows of different patients, males and females, as well as medial and lateral facets. Two-sample test was conducted using SPSS software (version 12.0, SPSS Inc, Chicago, IL, USA). All results were shown as mean ± standard deviation and a difference was considered to be statistically significant at P<0.05.

The measurement techniques had good or excellent intra-observer and interobserver reliability and the results of reliability of measurements were summarized in Table 1. Our database research yielded 120 elbow joints (53 right, 67 left) of 120 patients (54 males, 66 females) who fulfilled our criteria. The age range was from 22–60 years with a mean of 41 years. No significant differences between left and right elbows or between male and female controls were identified in the measurements (Table 2). The measurements of medial and lateral facets of the coronoid process were summarized in Table 3. 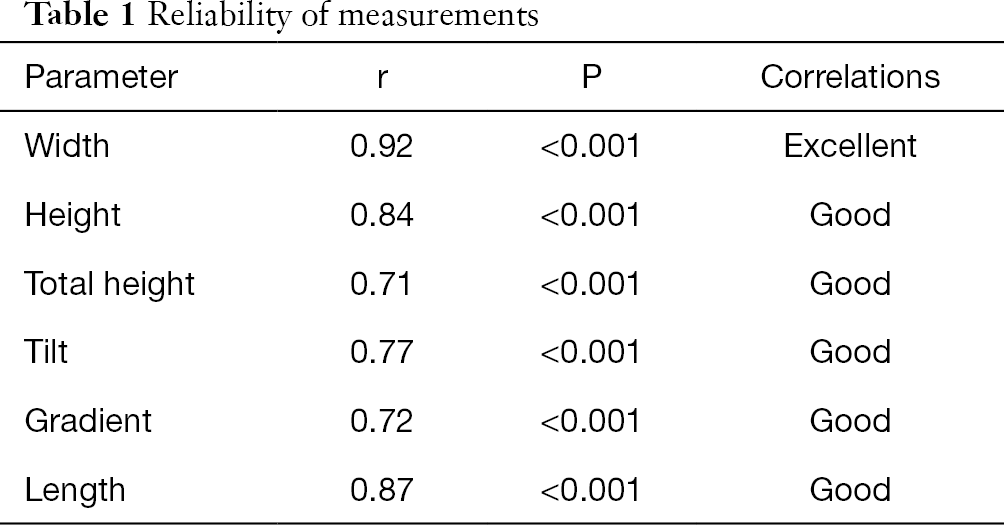 Figure 6 The average tilt angles of the medial facets were <90°, thus a vertical screw implant from the top of medial facet will not enter into the elbow joint.

Measurements of the facet ridges of the ulnar coronoid process have a certain clinical significance. Reichel et al. (14) identified three distinct ridges (medial, intermediate, lateral) on the coronoid process and measured their dimensions using 8 fresh frozen cadaveric elbows. They defined the lateral ridge as coursing along the anterior surface just medial to the lesser sigmoid notch; the medial ridge as running along the lateral edge of the sublime tubercle, and the intermediate ridge as the bone between the medial and lateral ridges. The average length of the medial ridge was 19.6 mm, the intermediate ridge measured 9.48 mm, and the lateral ridge was 15.1 mm (8). However, we found that the lateral ridge defined by Reichel et al. (14) was as part of sigmoid (radial) notch of the ulna and had less clinical significance with regard to elbow joint stability. Medial and lateral facet ridges were defined in the present study with a different view. The ridges began from the lateral and medial articular facets of the coronoid process and had different gradient angles and lengths. The medial facet ridge forms a steeper and shorter slope as it merges into the ulna compared to the lateral ridge. This means that a shear displacement of a medial facet fracture may be more unstable. If plating is to be performed, the plate should be properly shaped greater angle against the medial facet ridge than the lateral one.

Despite the strengths of this study, several limitations are worth noting. The sample size was limited to 120 elbow joints. This small sample size and the lack of repeated measurements may therefore preclude us from developing a comprehensive result. The ordinary CT reconstruction scans were used in the present work. To improve the validity of these findings, more intensive software packages for CT scans should be used in future investigations.

Ethical Statement: Our Institutional Review Board approved the protocol for the use of these scans (No. 2017-ZX-051-01).