Posterior cortical atrophy (PCA) is a clinico-radiologic syndrome characterized by progressive decline in visual processing skills (1). Although PCA is regarded as a subgroup of Alzheimer’s disease (AD), it is associated with the following “atypical” features which differentiate it from AD including: (I) younger age at onset of 50–65 years; (II) topographic distributions of atrophy and decreased metabolic activity in the posterior cortex (2,3).

The prevalence and incidence of PCA remains currently unknown (4). However, a study by Snowden and colleagues showed that out of 523 patients presenting with AD, 24 (5%) had a visual presentation, and 13 (3%) had an apraxic presentation was labelled as PCA (4,5).

We present a case of old age onset PCA with an atypical presentation: visual symptoms were subtle initially compared to the degree of memory loss, which made differentiation from AD more challenging. Neuroimaging findings in combination with neuropsychometric evaluation were crucial in making the diagnosis of this atypical presentation of PCA.

An 81-year-old right-handed man with formal education of 14 years presented to the memory clinic with 9-month history of episodic memory loss. He also reported concurrent difficulty in locating objects in his living environment and increasing use of reminder notes. Aside from his cognitive impairment, he mentioned recent visual decline such as inability to judge depth on staircases which led to recurrent falls. He was also involved in a collision with a vehicle while crossing the road due to his poor visual judgement. Nevertheless, he retained his ability to read, albeit relying on newspapers with contextual cues such as colorful illustrations. He denied visual hallucination as part of assessing for Behavioral and Psychological symptoms of Dementia (BPSD). There was report of visual illusions relating to distance of position, e.g., furniture in his room alternating far and close and not relating to one another.

His past medical history included ischemic heart disease, hypertension and a transient ischemic attack. There were no relevant medication history and no family history of dementia. He was an ex-smoker with previous excess alcohol intake and remained independent in activities of daily living.

He was initially investigated with a blood panel including full blood count, renal and liver function, bone profile, thyroid function, and hematinics which were all within normal limits.

An ophthalmology assessment was performed which did not identify a cause for his visual complaints. His cognitive decline was reflected in the Addenbrooke’s Cognitive Examination III (ACE III 52/100) with core deficit in memory and verbal fluency. In addition to his memory impairment, neurological examination and further comprehensive neuropsychometric evaluation revealed optic ataxia, simultanagnosia, as well as visuospatial and visuoperceptual impairment as demonstrated in the Rey complex figure test (Figure 1). 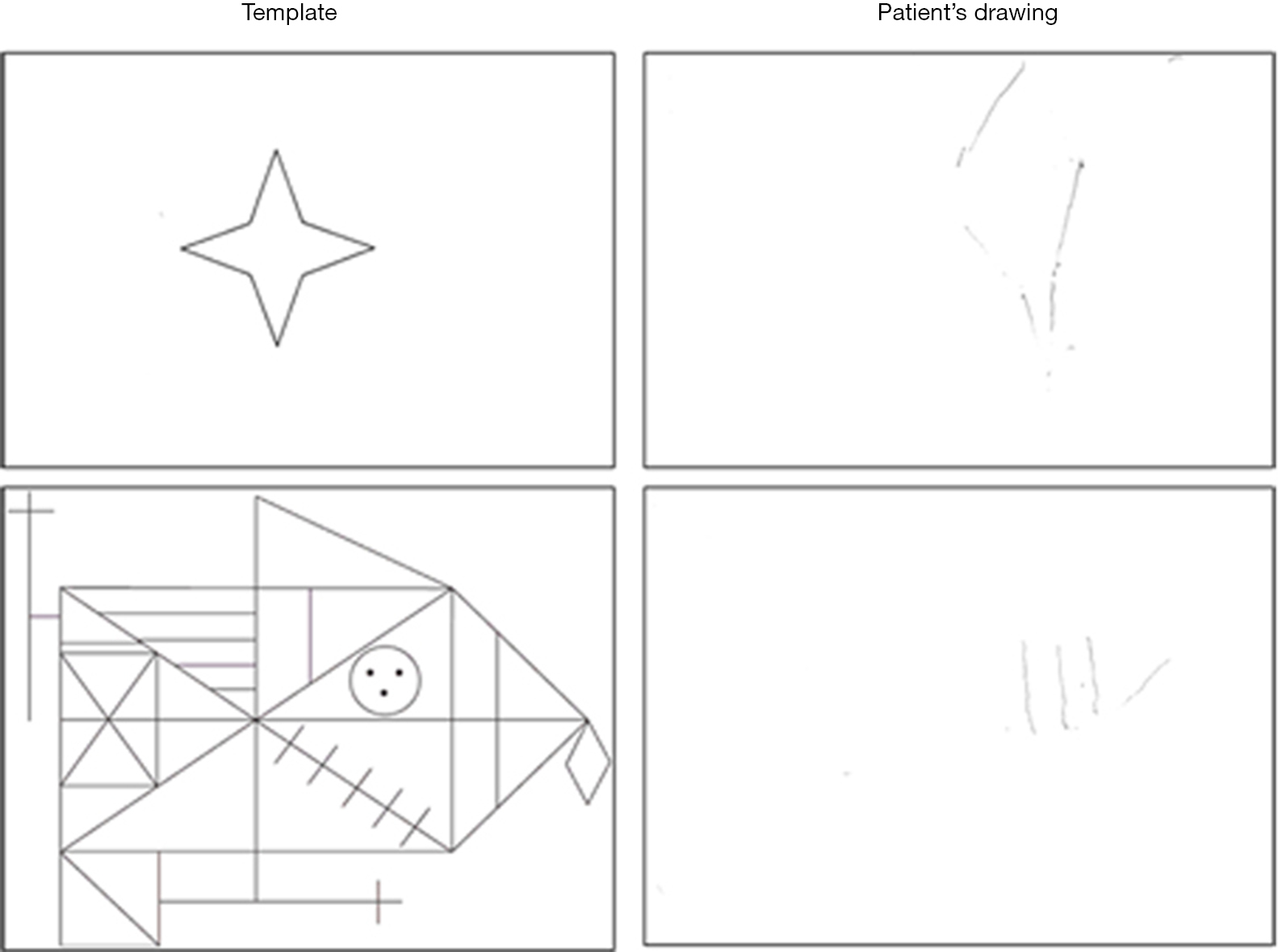 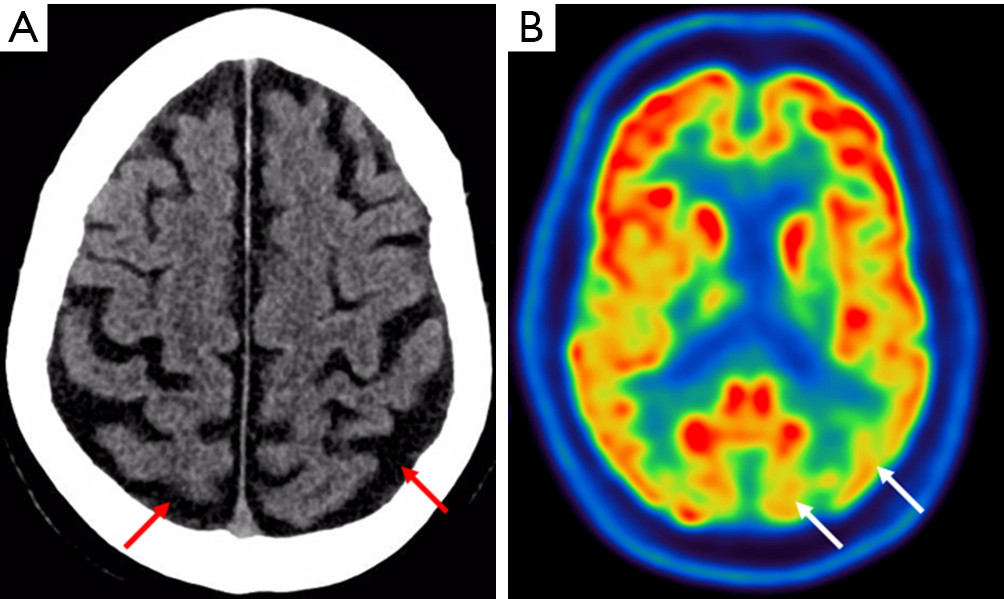 In a patient with an insidious onset of cognitive impairment, AD is most commonly considered. However, the patient’s unusual pattern of visual performance raised the possibility of (I) PCA and (II) mixed type dementia with static and progressive elements such as having a traumatic insult. There was no evidence of traumatic head injury either from the history or on neuro-imaging. A diagnosis of PCA was made based on the clinical presentation, neuroimaging and neuropsychological assessment.

Treatment with an acetylcholinesterase inhibitor (donepezil, 10 mg/day) was initiated which preserved his cognition a year later as reflected on subsequent ACE III. He was referred to PCA support groups. He had a comprehensive assessment by occupational therapy and adjustments were made to his home environment to aid in perceptual activities.

Case reports to date have described the visual and spatial decline in PCA patients that precedes the memory loss (8,9). In this case, the patient had presented with memory problems, despite ongoing visual deficits that were occurring concurrently. Patients often develop a compensatory strategy with the visual deficit until disabling cognitive difficulties take hold. The presence of PCA is subsequently unmasked when they seek medical opinion and undergo detailed memory and neuro-psychometric evaluation. In elderly patients presenting with impaired memory, the diagnosis of PCA needs to be considered.

Crutch et al. have suggested a consensus on the three-level diagnostic criteria for PCA, whereby PCA diagnosis is made in level 1, with further subtyping in levels 2 and 3 in the presence of co-existing neurodegenerative disorders (e.g., dementia with Lewy bodies, corticobasal degeneration) (1). The patient met the level 1 diagnostic criteria—clinical: insidious onset, gradual progression and visual deficit; cognitive: evidenced in the neuropsychology work up; radiological: evidenced in the CT and PET scans. It was not deemed that the patient fulfilled the diagnostic criteria for an additional disease process and he was therefore classified as level 2, PCA-pure.

Although most studies have shown age at onset in mid 50s to early 60s, a limited number of studies have reported a broader age range of 61.1±7.8 and 60±8.9 years (7,10). The emphasis on age as part of the diagnostic picture may inadvertently exclude older patients given that younger, working age patients are more likely to be acutely aware of visual problems and thus present earlier to physicians. PCA may, therefore be more common in older adults than previously thought.

Informed Consent: Written informed consent was obtained from the patient for publication of this manuscript and any accompanying images. A copy of the written consent is available for review by the Editor-in-Chief of this journal.