The use of MRI for radiotherapy (RT) simulation scan and planning has increasingly gained greater interests in the community of radiation oncology (1,2). Compared to the traditional use of MRI for diagnostic radiology, quite different requirements are imposed on MRI, such as the compatibility with RT accessories and higher geometric fidelity of MR image. To accommodate MRI for RT, the present mainstream solution is to modify a wide-bore (70 cm inner diameter) normal diagnostic MRI scanner into an RT-compatible scanner, usually named MR-simulator (MR-sim), rather than to re-design and built a totally new MRI scanner specifically for RT. For this modification, an RT-standardized flat indexed couch top needs to be amounted and fixed onto the normal curved patient table of the MRI scanner. The normal head coil used for diagnostic scan is thus no longer applicable on an MR-sim because it is not compatible with the flat couch-top and the thermoplastic mask for immobilization. Therefore, an alternative RF coil setting based on flexible surface coils is used instead for RT simulation scan. Meanwhile, the integrated internal two-dimensional (2D) laser of a normal MRI scanner has relatively wide beam-width and cannot facilitate high precision patient positioning in three dimensions (3D) for RT simulation scan. As such, a more precise external 3D laser is essential for RT purpose.

Because the flexible coil setting on an MR-sim may compromise image quality compared to the volumetric array head coil used for diagnostic scan, it is important and essential to quantitatively evaluate the acquired image quality of an MR-sim under flexible coil setting in a standardized way. However, so far there is no well-acknowledged standardized test protocol for quality assurance (QA) and quality control (QC) of an MR-sim. Under this situation, the criteria recommended by the American College of Radiology (ACR) for MRI accreditation under part B of the Medicare Physician Fee schedule for advanced diagnostic imaging services (3,4), in the document of “Phantom test guidance for the ACR MRI accreditation program” (simplified as “test guidance”) may partially serve the purpose of image quality and hardware assessment by providing an objective, standardized and widely-adopted performance baseline (5), although its current form is not designed and not yet well adapted for an MR-sim (6). In addition, it is of value to evaluate the image quality difference between the different coil settings for diagnostic scan and RT-simulation scans because it is potentially helpful to improve the flexible RF coil design for RT applications in the future. Meanwhile, it is also important to assess the repeatability of the phantom scan and image analysis on an MR-sim for the future development of QA and QC protocols.

As such, in this study, a series of the standard ACR phantom test was conducted on a 1.5T dedicated MR-sim using a flexible coil setting and volumetric head coil setting. The image quality difference between two settings was quantitatively compared. The inter-observer disagreement on image analysis acquired with flexible coil setting was investigated. 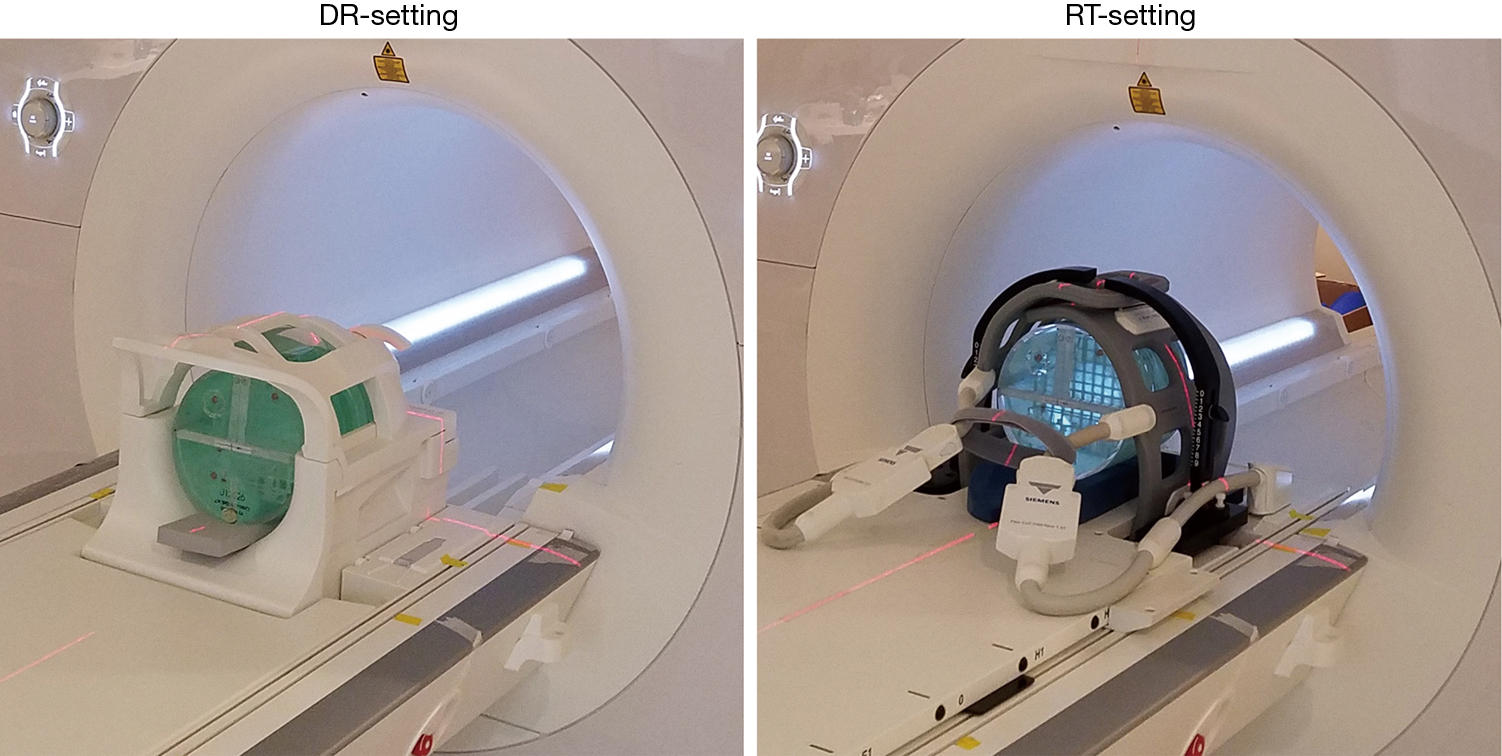 The ACR phantom scan generated nine datasets under DR-setting and nine datasets under RT-setting. In each dataset, ACR phantom image acquired under DR-setting by sagittal localizer, T1 spin echo sequence and T2 spin echo sequence were referred as DR-localizer, DR-T1 and DR-T2 images, respectively. Correspondingly, those phantom images acquired under RT-setting were referred as RT-localizer, RT-T1 and RT-T2 images. Phantom image analysis was conducted using the scanner console by an MRI physicist A, strictly following the ACR test guidance. Seven quantitative measurements were conducted including geometric accuracy, high-contrast spatial resolution, slice thickness accuracy, slice position accuracy; image intensity uniformity, percent-signal ghosting and low-contrast object detectability. There was sufficient time interval between the image analyses on different image sets to avoid the potential bias due to the fresh memory of the last measurement results. The measurement results on RT-images were compared to those on DR-images using the Mann-Whitney U-test with a significance P value level of 0.05.

The measurement results under two settings were listed and compared in Table 1. The representative image series under RT-setting and DR-setting were illustrated in Figure 2. 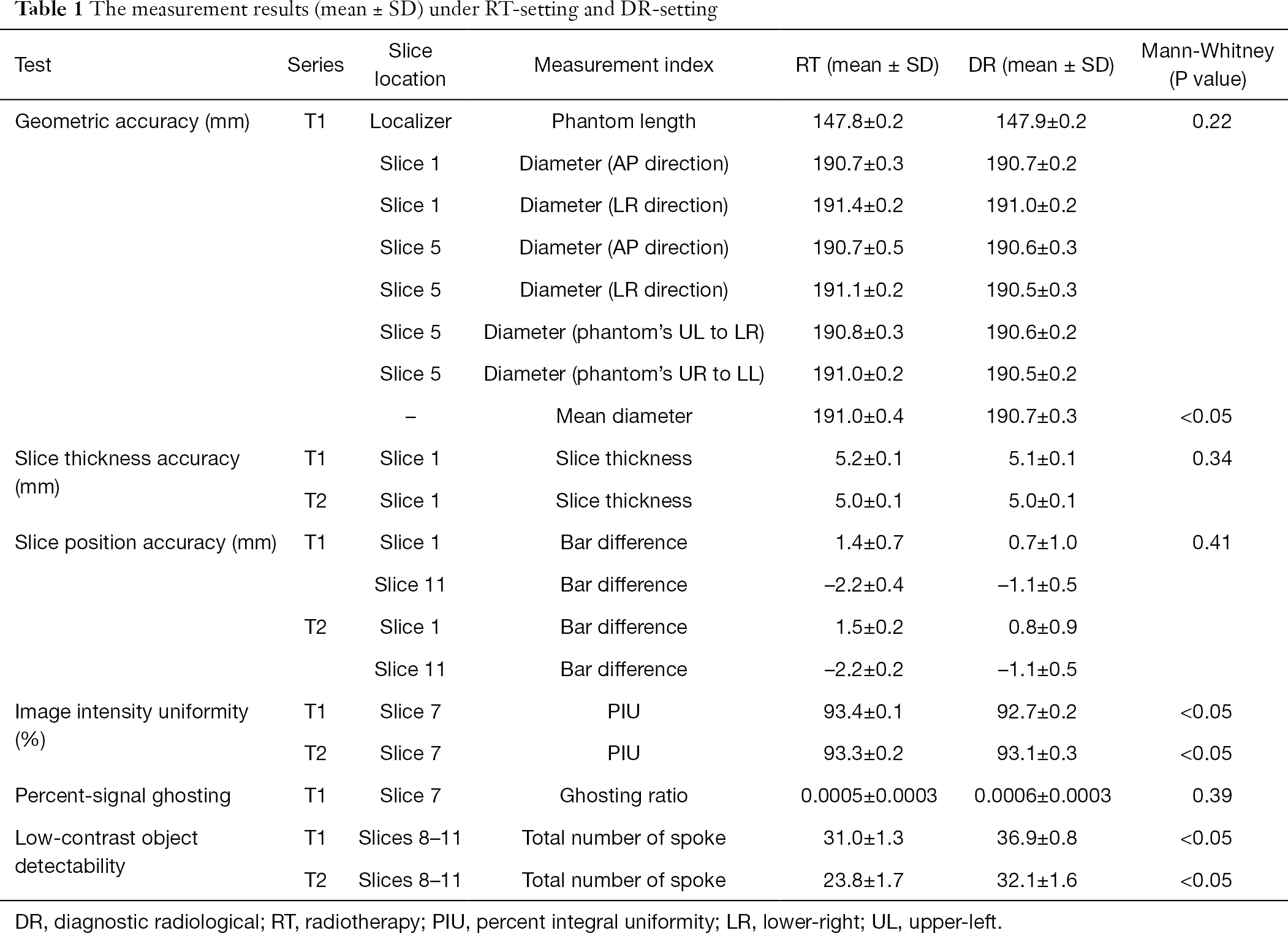 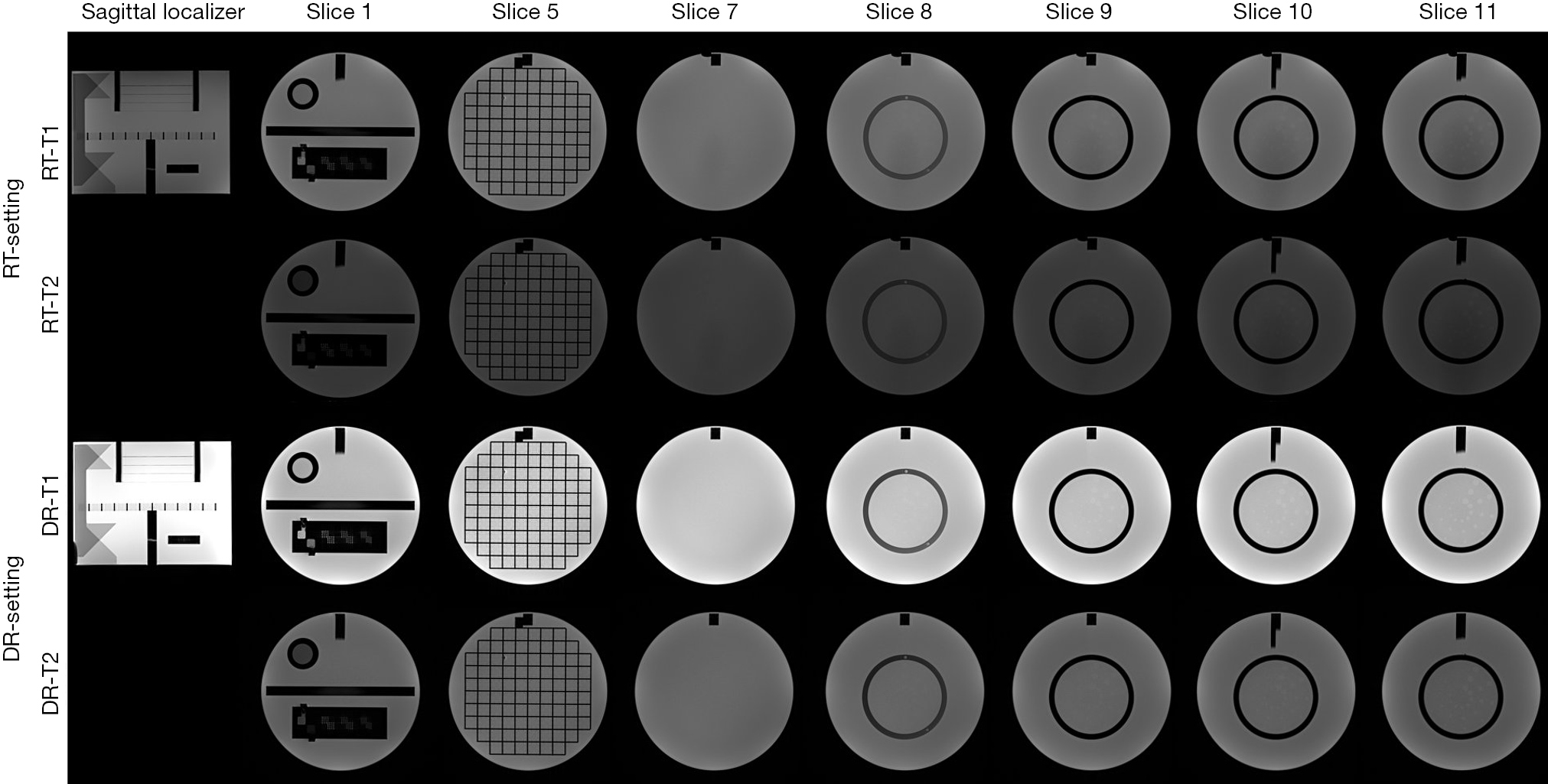 Figure 2 The acquired T1 and T2 images under RT-setting and DR-setting, displayed in their corresponding default contrast level and windowing. Only the images used for image analysis are shown. RT, radiotherapy; DR, diagnostic radiological.

The geometric accuracy of the ACR phantom inside length (true value: 148.0 mm) measured on RT-localizer images was 147.8±0.2 mm (mean ± SD). The geometric accuracy of the measured ACR phantom inside diameter (true value: 190.0 mm) was 191.0±0.4 mm. As comparison, the corresponding geometric accuracy of the ACR phantom measured on DR-images was 147.9±0.2 mm (P=0.22) and 190.7±0.3 mm (P<0.05). The ACR recommended criterion on spatial accuracy was within ±2 mm of the true values so both settings passed. The measured diameter under RT-setting was significantly larger than that under DR-setting as revealed by Mann-Whitney U-test. This difference might be explained by the different display level and window used for measurement between two settings. However, it is worth noting that this mean difference of diameter accuracy was only 0.3 mm (much smaller than the ACR criterion of 2 mm), so might not much affect clinical RT use.

The results of BA analysis of inter-observer agreement under RT-setting were presented in Table 2 and Figure 4. 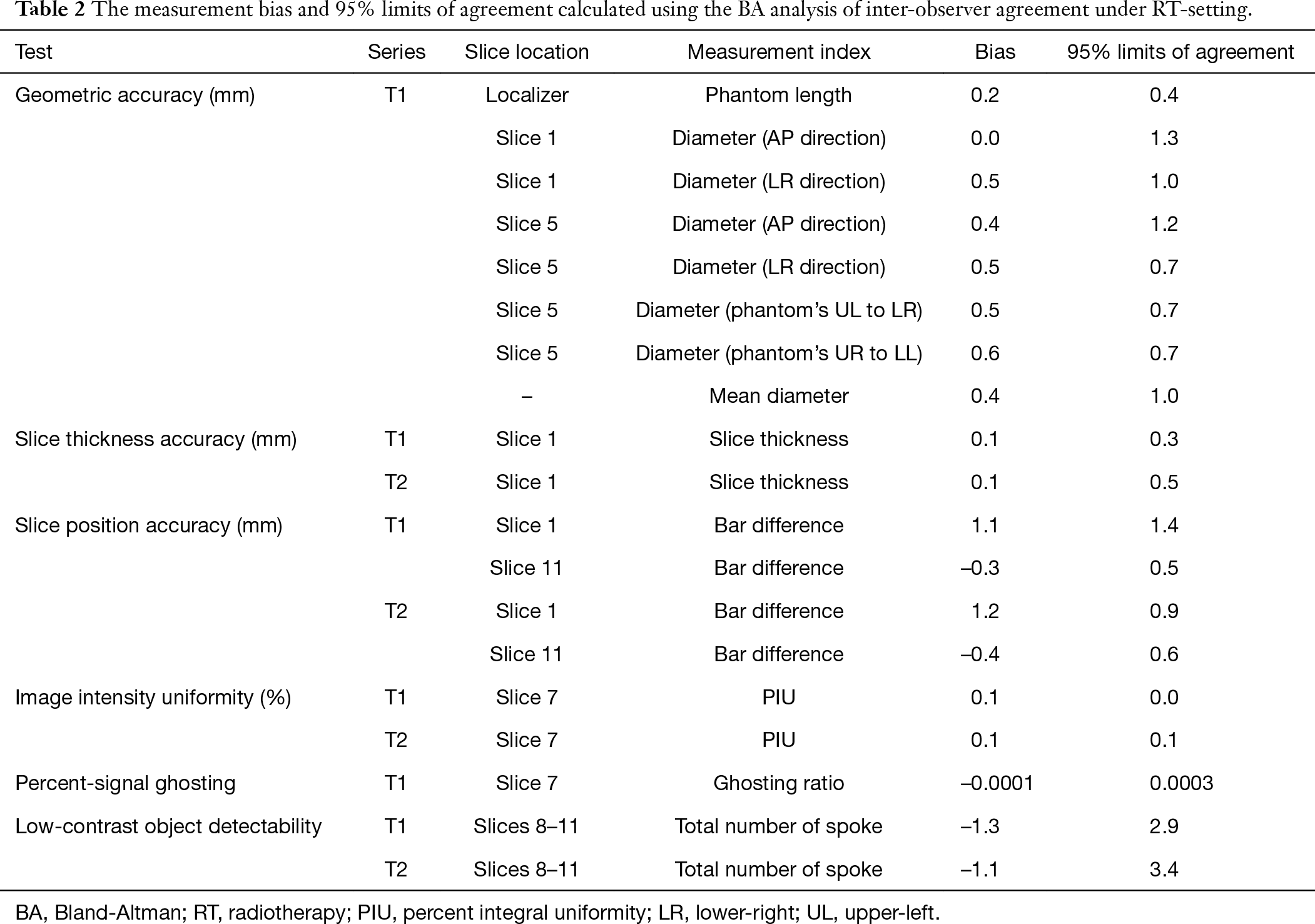 Table 2 The measurement bias and 95% limits of agreement calculated using the BA analysis of inter-observer agreement under RT-setting.
Full table 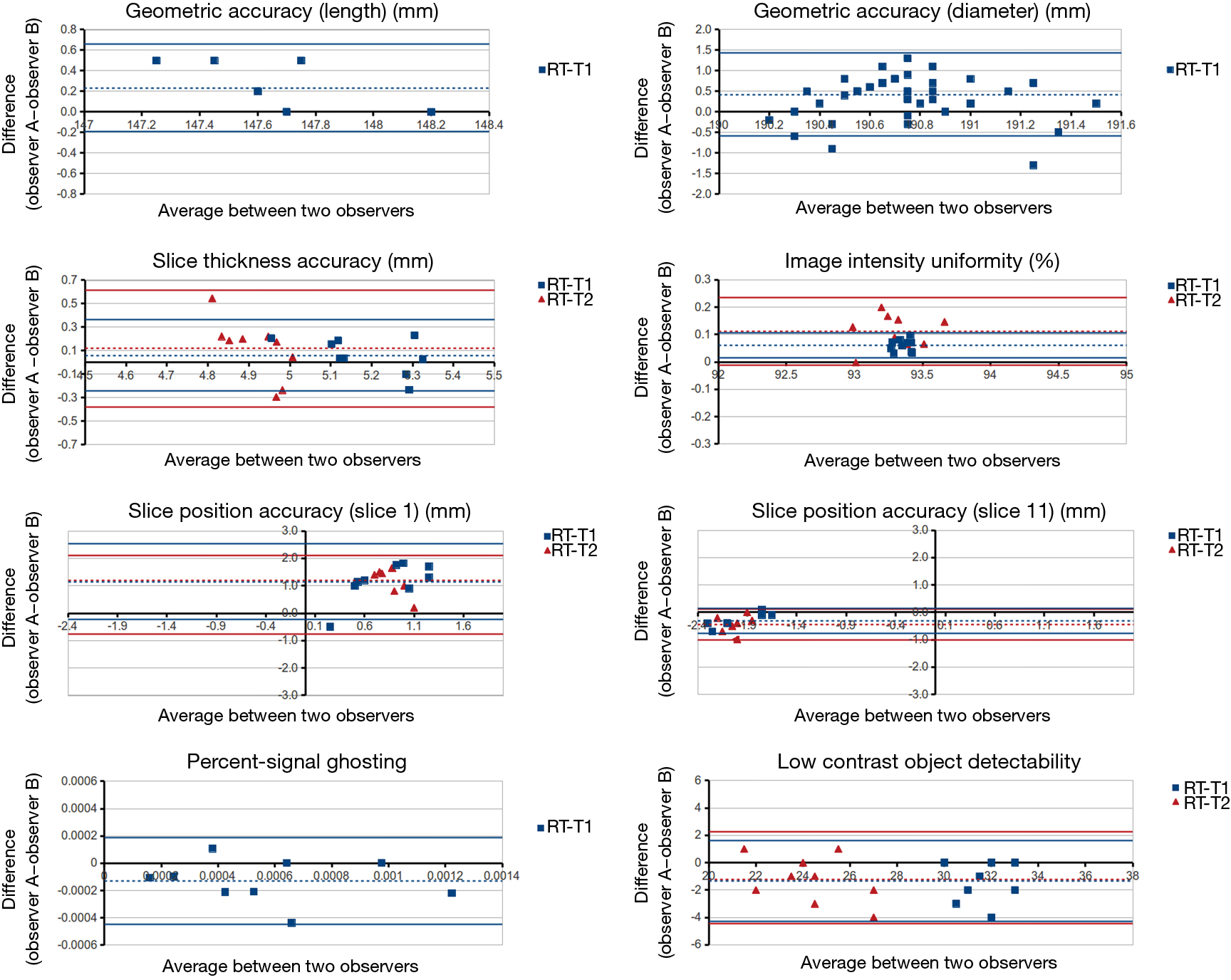 Excellent inter-observer agreement was noted in the image uniformity assessment under RT-setting. The measurement bias was 0.1% for both RT-T1 and RT-T2. The corresponding 95% limit of agreement was approximately ±0% and ±0.1%, respectively.

The 95% limit of agreement for the percent-signal ghosting was ±0.0003 for RT-setting. The measurement bias was around –0.0001, very close to zero.

There have been a number of publications of the ACR phantom test conducted on diagnostic MRI scanners (10-14) for diagnostic MRI QA/QC purpose, while the reports of ACR phantom test on dedicated MR-sim are still sparse (15). Our results showed that ACR phantom image acquired on a 1.5T dedicated MR-sim generally had sufficiently good image quality to pass all ACR recommended criteria, under a compromised flexible coil setting, thus fulfilled the basic requirements for clinical service. However, on the other hand, the ACR criteria are just indicative of a minimum level of performance of a well-functioning MRI system, but not necessarily suggest the fulfillment of advanced clinical application requirements. Our image analyses did reveal the significant underperformance of RT-setting primarily on low-contrast detectability. The relatively lower signal-to-noise ratio (SNR) of the RT-images accounts for this compromised low-contrast detectability. Although image SNR is not a measurement item in the ACR guidance, it could be estimated by using the recorded data for the calculation of percent-signal ghosting in T1 series. We calculated T1 image SNR by dividing the mean image intensity of the large region-of-interest (ROI) by the averaged image intensity of the left ROI and right ROI (left-right was along frequency encoding direction in our scan) in the slice 7 of T1 series. The image SNR was around 95±3.0 for RT-T1, considerably lower than that of 170.0±5.0 for DR-T1. The lower image SNR of RT-setting is mainly attributed to the sub-optimized flexible surface array coil performance compared to the volumetric head coil. As such, the lower image SNR associated with RT-setting might potentially compromise target and organ-at-risk (OAR) delineation in clinical practice, while yet to be further verified through in vivo imaging. 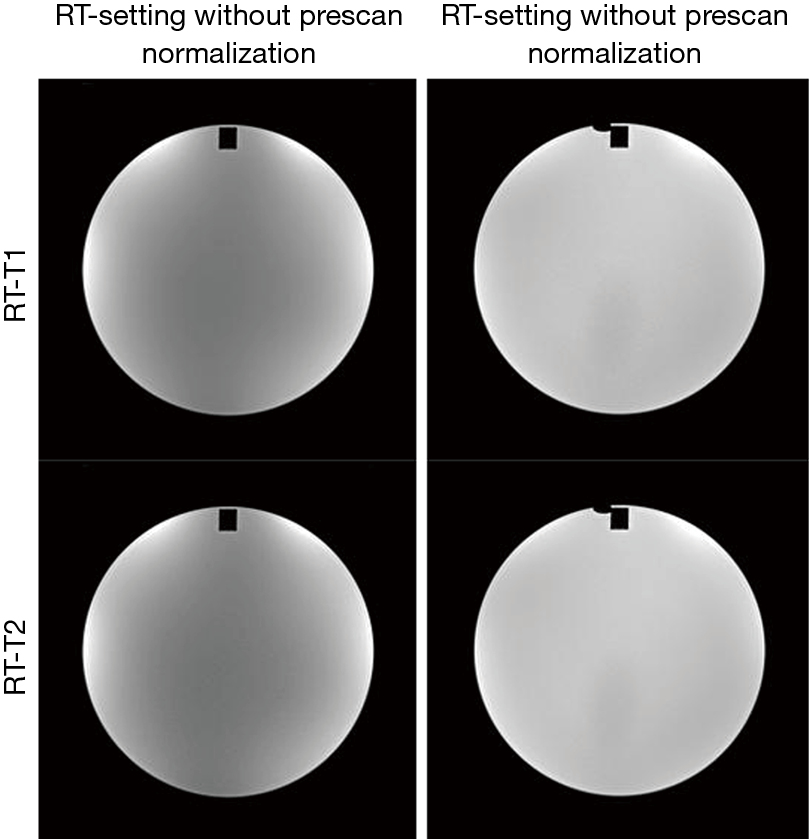 Figure 5 The images of slice 7 with and without prescan normalization under RT-setting. RT, radiotherapy.

In theory, other measurement items except for low-contrast detectability and image intensity uniformity should be less influenced by or independent of RF coil difference under two settings. High-contrast resolution might potentially be affected by SNR while our results showed that the highest 0.9 mm resolution could still be well resolved with the compromised SNR under RT-setting. A quite narrow receiver bandwidth of 150 Hz/pixel was used in this study. As MR image distortion theoretically increases with narrower receiver bandwidth, it is anticipated that better geometric fidelity could be achieved to meet the critical RT requirement when a larger receiver bandwidth is applied, although image SNR could be slightly reduced. It is worth noting that the difference of geometric accuracy should not be explained by the image distortion difference between two settings. Assumed that B0 homogeneity and gradient linearity were constant, it may mainly reflect the variability of the phantom positioning in each scan session and intra- or inter-observer disagreement. These two factors also account for the measurement differences of slice thickness accuracy and slice position accuracy between two settings. It was also noticed that the standard deviation of the slice position accuracy was larger under DR-setting than RT-setting. This might be explained by the fact that it is more difficult to consistently and precisely position the ACR phantom in the volumetric head coil due to its small and curved inner space. The use of a commercial ACR phantom holder or cradle may help to improve it.

BA analysis and inter-observer ICC results showed that the image quality of ACR MRI phantom under RT-setting was highly objective and reproducible. The largest inter-observer disagreement on slice thickness accuracy could be explained by the subjective placement of the length measurement line by the observers in the presence of scalloped or ragged ends of the two signal ramps.

This study has some limitations. First, the results in this study only assessed the image quality under one specific configuration suitable for RT purpose on a single MRI scanner. There are different customized RT-settings provided by vendors and research sites for different MRI scanner models. Even for a single MR scanner model, there could still be more than one RT-setting configuration. Although our results may serve as a reference baseline on a 1.5T MR-sim, the influence of different RT-settings on image quality and reproducibility needs to be individually investigated. This study was also limited in the small numbers of scans and only two observers. Since our results suggested that the results were highly constant and reproducible, we considered that the relatively small sample size could still represent a convincing result.

Finally, it is worth to point out that we did not intend to develop and suggest a QA protocol for MR-sim in this study by simply conducting the standard ACR phantom test under RT-setting. The results in this study could be used as a reference for MR-sim image quality assessment under RT-setting, but should not be interpreted as the passing criteria of accreditation or QA test for an MR-sim. It is highly desirable that a standardized QA protocol be developed for MR-sim, no matter using an ACR MRI phantom or not. At present, there are no well-acknowledged standardized QA protocols for MR-sim. Nonetheless, we believe that some components in the standard ACR phantom test should be of value for the future development of QA and/or QC protocols for MR-sim, because of its objectivity, standardization, repeatability and the wide availability of the phantom.

In conclusion, our study showed that sufficiently good image quality could be achieved using a flexible coil setting on a 1.5T MR-sim to pass the criteria of the standard ACR phantom test. Compared with DR-setting, RT-setting mainly under-performed in low-contrast object detectability because of its compromised image SNR. Standard ACR MRI phantom test under RT setting was overall highly reproducible and subject very little to inter-observer disagreement.

Ethical Statement: This study was approved by the research committee and ethics board of Hong Kong Sanatorium & Hospital. This study did not involve human subject and no written informed consent was obtained.